Live from The Open: Busy summer for ACS continues with Asian Games and European Championships up next

Aerial Camera Systems (ACS) is coming off The Open Championship, where it had a number of specialty cameras in use at Carnoustie, and quickly turning around to support major productions at the Asian Games in Jakarta and the European Championships in Glasgow. “The Open dovetails straight into two other big events and then we get back from those and the Ryder Cup will be our next big event,” says David Whitlock, ACS operations manager. A crew of 12 will be in Glasgow, 25 in Jakarata while 20 were on hand this past weekend for The Open. 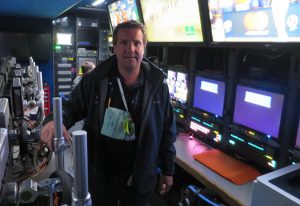 David Whitlock and the ACS team oversaw 11 bunkercams, five railcams, and a wirecam at The Open.

“The Open had more of our cameras than ever as we really expanded a couple of years ago at Troon with the Bunkercams and they have made a difference to the coverage,” says Whitlock. “And although nothing has changed in terms of new kit the bunkercams are becoming integral to the coverage.”

There were 11 bunkercams in use at Carnoustie, eight on the course for European Tour Productions, two at the practice range bunkers for The Golf Channel, and a single bunkercam at Sky UK’s Open Zone set. The set-up process actually began in November, 2016, as the Carnoustie greenkeepers wanted to get to work early to ensure the bunkercams were well integrated into the course.

“They wanted to get the infrastructure in really early and they are totally onboard,” says Whitlock. “It’s amazing how it has been accepted by the golf courses and green keepers and they now see it as part of the deal and that we will turn up and ask them to cut holes in their bunkers.” 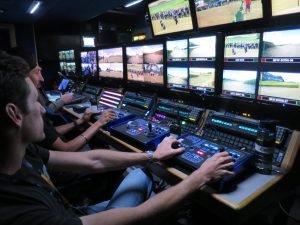 The bunkercam operators worked in Telegenic’s T23 OB unit at The Open.

Three of the bunkercams this year had pan and tilt heads while five were fixed focus. That decision is based primarily on the size and shape of the bunker as taller bunkers with a wall can handle a pan-and-tilt bunkercam. The smaller bunkers make use of a CIS mini-cam.

ACS also provided five railcam systems, four on tee boxes (1, 8, 13, and 16) as well as a greenside rail cam on the 8th hole. The railcam on the first hole offered a technical first as it was a Sony P43 and operated in 4K HDR mode as it was part of the DirecTV UHD production.

The greenside railcam made use of a Cineflex stabilised mount and while most railcams tend to operate at speeds upwards of 30 mph this one was operated quite differently.

“The railcam is refined and can run really slow if you dampen down the acceleration,” says Whitlock. “It’s barely noticeable that it is moving and was all about trying to get the timing right as each golfer takes a different amount of time to set up for a putt. It worked really well, and we were pleased with it.”

The final point of presence at The Open for ACS was the Wirecam which once again flew over the practice range. Unlike last year it didn’t manage to become part of the actual event coverage as Jordan Spieth and the other golfers managed to avoid hitting their balls near the range.

Up next for ACS are the European Championships which begin on 1 August and will be held in Glasgow and Berlin and then the Asian Games which begin in the middle of the month and will be in Jakarta.

“We will be at three venues for the Asian Games,” says Whitlock. “At the main athletic stadium, we will have a 100-metre long railcam, a vertical track camera showing the field of play from the back of the throwing net, and then a lot of minicams on the field of play for foot faults. We will also have cameras on the high bar and another beauty camera in the roof.”

The swimming venue will also have a camera in the roof as well as cameras behind the diving boards while the gymnastics will have overhead cameras on each apparatus and a railcam along the vault run. Also look for two helicopters with ACS kit to be used for road races and the marathon.

“The Asian Games are a massive event in terms of the amount of venues and sports it covers,” he says. “It’s good to be involved with it.”

The ACS presence at the European Championships includes the swimming venue, diving, and then rowing events via Cineflex stabilised cameras on the boats. And look for a Grass Valley LDX C86N camera to be mounted on the new ACS GSS stabilised mount for super slow-motion recording.