Live from The Open: C3i and Exterity ramp up live video over IP around the course 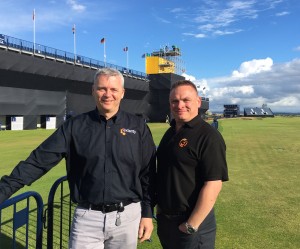 C3i Group and Exterity have extended their existing collaboration in providing the R&A with IP video solutions and connectivity during The Open in Royal Troon. This follows C3i Group’s selection as Digital Communications Partner to The Open until 2021.

The two companies first built a system for The Open in 2010. The solution has been maintained since, expanding coverage of the event to the hospitality and media suites. The system deployed for The Open 2016 combines 450 displays and set-top boxes, live streaming around the event and to a 36m LED video wall in the Media Centre which delivers live feeds to on-site broadcasters, such as BBC, ESPN and TV Asahi.

This year The Open adds coverage from NBC and Sky, enabling each on-site broadcaster to stream live feeds from European Tour Productions, the world video feed provider, alongside each broadcaster’s content throughout the event. The Exterity system is used to deliver health and safety messages to ensure that information can be disseminated quickly.

At Royal Troon this week Exterity CEO Colin Farquhar told SVG Europe, “we’ve worked closely with Jason and his team for a number of years. We’re one part of the total video and media delivery system for which Jason’s team is responsible. We’re involved with live television distribution, live video delivery, delivery of content into hospitality areas and different parts of the course, providing video feeds for sponsors who want to drop in their advertising. The system here that C3i is responsible for here is much larger than that, it’s a very complex video infrastructure that’s supporting a whole gamut of users across the course.”

Says C3i Group Managing Director, “the IPTV system has actually been the mainstay of how our involvement with The Open has evolved. We now have 450 IPTV boxes around the course. Interestingly this year, the broadcasters are taking us on much more and actually using us in the TV Compound as their reference monitors. What they’re putting out is going all the way around the course and coming back to them, closing the loop. In the past they always provided their own monitoring and RF systems; but they now believe in this system to the point where they’re now quite comfortable using it as their reference. We’ve had a massive uptick in the amount of receivers we’ve had to place in just the TV Compound alone.”

“One of the big areas for us is management,” added Farquhar. “It’s very important in this kind of environment because it’s a temporary installation. We’ve added a new level of management to be able to monitor and track everything this year. One of our guys is here working with Jason and his team providing that additional support and that’s going really well.

“As this system is IP-based you can have different levels of control,” continued Farquhar. “In some of the hospitality areas for example, the guys managing those areas want to be able to have control of their local TV. What we’ve added is a web app to give them a simple mechanism whereby they can connect to the TV control system, identify the devices that are in their local area, and then take control of those devices.

“So, very simple at one level, but with the web app, being IP-based and with the control system behind it we’ve been able to utilise some of those APIs that we provide to give more people access to control and manage the system to their particular needs. Facilitating that local access has been quite an interesting evolution this year.

“We’re multicasting onto the network,” said Farquhar. “We’ve got live TV feeds coming in and we’re also encoding a lot of incoming feeds from the broadcasters. We’re able to consolidate a set of channels that’s then multicast out onto the network. We’ve a large number of end points on the decode side; on the encode side it’s quite compact and provides all the channels and content – combined with a playout server so that we can take advertising content for a sponsor for example and stitch that into independent channels.”

What’s the role of IPTV and data services alongside fans’ expectations for WiFi – the ‘I was there’ and ‘always on’ WiFi that everyone now demands? “The impact of the [fan] demand is huge,” said Hall. “And probably that has grown tenfold in the last four years, because of the expectation for public WiFi. It’s now a commodity, not a nice-to-have. People expect WiFi. That in itself is an enormous undertaking to provide course-wide WiFi for the public, and to be able to then stream to the app.

“Here as The Open we are looking after the fibre network underground; the Ethernet network; the WiFi network; the IPTV circuit; IP telephony; all of the PSTN and ISDN lines as well, so all of the media circuits. And the Open TV channel as well!

“We’ve built a legacy fibre optic infrastructure on the course that is owned by the R&A and the host venue. This now drastically reduces the amount of above-ground cabling you need as it sits underground,” said Hall.