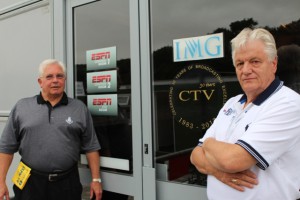 Bill Lacy (left) of IMG Media with Barry Johnstone of CTV OB outside of the ESPN Open control room facility in Muirfield.

CTV OB is in anniversary mode this year and week as it is not only celebrating 30 years of being in the remote OB production business but also its 25th consecutive year serving as technical services provider for US broadcaster needs.

The first job was to help ABC Sports deliver the 1988 Open to viewers in America. Within a year CTV OB had hired Sam Branter who had earlier that year retired from his role as engineering manager for BBC Sport.

“We suddenly had 30 years of experience on the team and he opened many doors for us and helped us gain credibility to become a bigger part of the Open family,” says Johnstone. “I can’t emphasize enough how important Sam was to us.”

In 1994 ABC gave the responsibility of producing the Open to TWI that is today known as IMG Media.

“It was then that Bill Lacy [SVP, IMG Media] asked us to continue the association and that has lasted until today,” adds Johnstone.

The success at the Open 25 years ago created a domino effect that made CTV OB the primary force in golf coverage in Europe. In 1990 it took over technical facilities for the Senior Open, another TWI event. Then, in 1992, European Tour Productions was launched as a joint venture between the European Tour and TWI. CTV OB was again involved in a major European golf production and in 1997 it was awarded a five-year contract for ETP that allowed for a fleet of OB units to be built specifically for golf coverage. 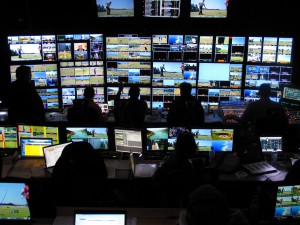 A look at the ESPN control room at the Open which is a purpose-built facility that is large enough to fit both the OB unit and support vehicle used by CTV OB the first time it provided technical facilities for US broadcast needs.

Over the years the broadcast entities that have ultimately benefitted from CTV OB and IMG Media’s expertise has changed. At first it was just ABC in a production that did little more than cut in a few unilateral camera shots into the BBC host feed. Then the broadcast plan changed to be ABC on the weekend coverage and ESPN on the first two days; then to ABC on weekend and Turner Sports on the first two days, and then, ultimately, to ESPN having all four days of unilateral coverage.

Lacy says that CTV OB’s ability to come through and deliver on what was needed allowed for the relationship to grow.

“And their expertise only increased with the European Tour Productions and they have become more and more proficient in doing golf.”

That proficiency soon had others involved in sports paying attention to CTV OB.

“Because of our success Sky chose us to build OB units specifically for cricket in 1999,” recalls Johnstone. “So in 2000 we had golf and cricket and then we just grew into doing more sports and entertainment.”

Over all the years CTV OB has accomplished many impressive technical feats as part of its technical contract for the Open. Going all digital, going all HD, and expanding the coverage to fully unilateral production are just a few of the notable milestones. But Johnstone says it is this year’s show that stands out for Open-related accomplishments.

“You can see how far we have come since the launch as we have moved away from trucks and into a purpose-built environment,” he says. “It’s hard to imagine that our truck and support vehicle that were used in 1988 would fit inside the production facility we have built this year.”