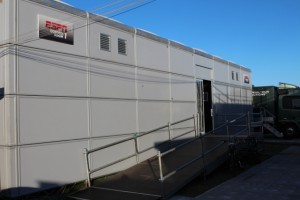 The outside of ESPN’s Open broadcast centre that was built by CTV OB and includes the main control room and iso area.

ESPN’s production presence for the main live coverage of the Open at Muirfield golf club in Gullane, Scotland has made the move to a completely cabin-based environment that was designed by IMG Media and integrated and constructed by long-time production provider CTV OB.

“Trucks are physically smaller here than they are at home in the US as golf production staff in the US are used to 53- or 54-foot truck systems with double and triple expandos,” says Bill Lacy, senior vice president for IMG Media. “But as ESPN has increased their facilities and coverage we pushed the existing OB facilities to the limit.”

Three years ago the three entities involved alleviated some of that pressure on the OB-based production team by moving the EVS replay and camera iso area to a production cabin. But this year the decision was made to give the main production team more space as well. Some of ESPN’s operations, however, are still based in OB units. Sportscenter is operating out of CTV OB 1HD and ESPN ITV is operating out of 9HD and MVT 1.

“That move added fuel to the expansion fire as ESPN continued to increase the size of its facility,” adds Lacy. 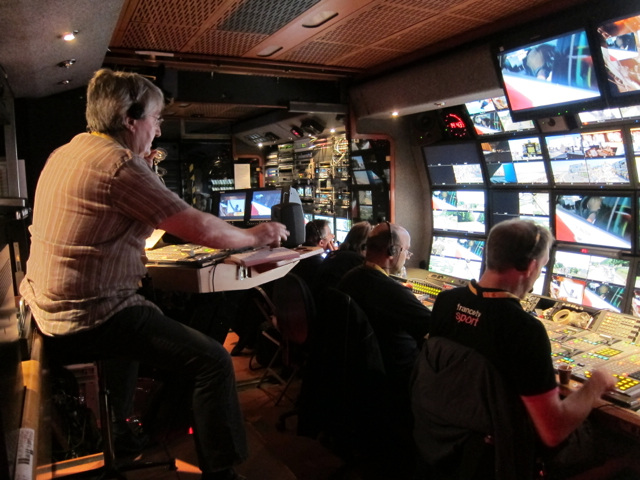 The main production area offers much more room than a traditional OB unit.

Hamish Greig, CTV OB, technical director, says the challenge was not just the structure but a new technical infrastructure. The main production area houses three rows of production seating and desks, including an expanded front-bench area with a Grass Valley Kayenne vision mixer 18 40-inch LCD panels each served by an Evertz multi-viewer. Across a small hallway is the expanded EVS area that is home to operators controlling some of  the 16 networked EVS XT servers (a mix of XT3 and XT2 models) and 17 EVS IP Directors.

Getting the new infrastructure up added another two days to the compound construction schedule as it required not only a new front bench and replay area but also for other operations like audio and intercoms to move to cabins. And then all of those facilities needed to have communication and signal connectivity to three studios: the main studio show, the Sportscenter set, and the practice range set.

“All of the individual intercom frames have been combined into one  512 port virtual mainframe, utilizing trunking computers, RVON cards, Tribus cards and the RTS Omneo IP-based system,” adds Greig.

Intercoms were not the only area that needed a new approach. The need for 40 Evertz multiviewers to serve sources to a large number of video panels greatly expanded the router needs. And the Snell Sirius 800 router with 576×1152 inputs and outputs may need another boost next year.

“That is a 40% increase in outputs over last year and we are already now well into the 1100s in terms of outputs,” adds Lacy.

The audio mixing room is also located in a cabin with a Calrec Artemis console at the center of the production. There is also an audio sub-mix area, bringing together signals from more than 50 effects mics located on the course. All of the audio consoles, a mix of Calrec Artemis, Apollo, Zeta, and Sigma consoles, are all networked via Calrec Hydra. 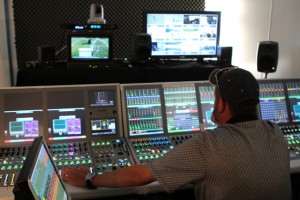 “That reduced the amount of copper cabling and gave us the same flexibility we have with the intercoms to send signals anywhere at anytime,” adds Greig.

Other gear involved in the production includes five Vizrt units (two for the main show and one each for Sportscenter and the ITV programming and a spare), four Avid editing suites, and the mix of emerging technology graphics and enhancements.

Finally, there is the need to connect to the BBC in order to share camera signals and bring in yet another 50 camera signals. The BBC’s outside source central apparatus room (OSCAR) is connected to CTV OB’s technical outside signal allocation unit (TOSA) to ensure ESPN has maximum access to camera signals from the course.

Day one is just coming to a close and the additional space is proving its worth for all involved.

“This has forced us to have complete versatility in our comms, audio, and video signal flow and forced us to find solutions to integrate them all,” adds Greig. “We are basically running an IBC.”