The Open in St. Andrews this weekend marks the second year that CTV Outside Broadcast has serviced both IMG Media/ESPN and the BBC, and, as with many things in life and business, the second time around has been easier and smoother for all involved. 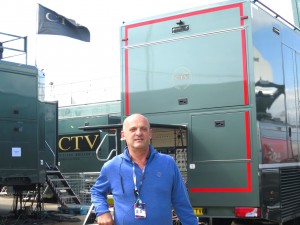 CTV OB’s Hamish Greig outside OB10, which is being used by the BBC for its coverage of The Open.

“There’s been much more information flow between the BBC and ESPN on the technical front, and we also have a much better understanding of what the BBC requires,” says Hamish Greig, technical director, CTV OB. “So we have a more cohesive service for both entities.”

“We also have a cabin for the BBC’s virtual-eye technology, scoring, and editing, as well as an RF cabin and the technical-operations center,” says Greig.

ESPN is once again in the large control-room cabin as well as in multiple production trailers. The transition to that environment began in 2010 with just the EVS replay operations and camera iso operations. But then, in 2013, a new production area, constructed by Dublin-based Tall Structures, gave the ESPN main production team a home measuring 10.25 meters wide x 8.2 meters deep. 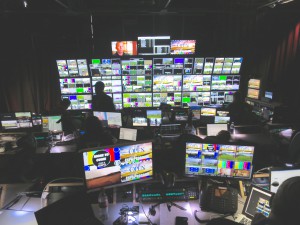 Inside the ESPN control room cabin that was built by CTV Outside Broadcast.

The main production area houses three rows of production seating and desks, including an expanded front-bench area with a Grass Valley Kayenne vision mixer and 18 40-in. LCD panels, each served by an Evertz multiviewer. Across a small hallway is the EVS area, which is home to operators controlling some of the 16 networked XT servers (a mix of XT3 and XT2 models) and 19 IPDirectors.

The audio-mixing room is also located in a cabin, with a Calrec Artemis console at the center of the production. There is also an audio-submix area, bringing together signals from more than 50 effects mics located on the course. All the audio consoles — a mix of Calrec Artemis, Apollo, Zeta, and Sigma consoles — are networked via Calrec Hydra.

“This year, they are 45 meters apart, so we can use copper cabling,” says Greig. “That enabled us to use the money for other tools.”

One of those tools is Lawo’s Axon Cerebrum, a system that can control and monitor many devices, thanks to its support for the SNMP protocol, Axon’s CAP protocol, or the General Devices protocol.

“Last year, on the ESPN side, there were too many sources and destinations, but Cerebrum makes the control interface much smoother,” Greig explains. Tally control, in particular, benefits from the Cerebrum system.

Dual-redundant MADI routers in both the ESPN and the BBC technical-operations centers have also improved operations.

Also new this year is the use of Sony HDC-4300 cameras operating in high-speed mode.

“They’ve been working straight out of the box,” adds Greig. “Operation has been painless, as we have EVS software to allow for eight in and two out [from the same server].”

As for the Old Course itself, Greig says the new compound is much improved over the one used five years ago. And the course has 23 fiber nodes on the course; the sites of the other Open Championships have between eight and 15. Those fiber nodes come in handy as more than 140 SHEDs (SMPTE Hybrid Elimination Devices) are on the course to allow the use of single-mode optical fiber.

“This is the first course that tried out having a fiber infrastructure, and it is also the one venue used more than any other,” says Greig. “Plus, it’s a showpiece home for the R&A.”

The fiber cabling comes in handy for dealing with the wind. Because there are more RF receiver sites, the cranes can be lowered when wind speeds get too high.

“We have eight receive sights so, if the crane isn’t up, it doesn’t really matter or kill us,” says Greig. “But, in the old days [with fewer receive sites], we needed the height.”

CTV OB is providing services to Japanese broadcaster TV Asahi, via a subcontract with TVM, and supplying three RF cameras, three cable cameras, and three Encore systems. The Golf Channel also is relying on CTV OB, which is helping support activities in the press center, the mixed zone, and at the Golf Channel studio. And ESPN’s ITV service is calling OB9 home.

“The biggest challenge is actually before and after The Open,” says Greig. “We have three groups of trucks that will be leaving Sunday night for other productions. Three trucks are going to the Omega European Masters in Switzerland, and then, on Tuesday morning, two other trucks need to be down at the Senior Open at the Sunningdale Golf Club for ESPN. The rest of our fleet will also be at the Senior Open for European Tour Productions.”