Live from The Open: CTV OB takes next step in Open workflows

The 146th Open Championship is underway at Royal Birkdale in England and this year’s production efforts build off last year’s efforts at Royal Troon as it was only a year ago that European Tour Productions (ETP) took over host production duties and NBC and Sky Sports took over U.S. and domestic UK broadcast rights respectively from ESPN and the BBC. The efforts of all involved last year required everyone to move more quickly as there was only six months to prepare from the time the rights and duties changed hands to tee off.

“This year’s planning went smoother as we had done it once with all the new parties,” says Hamish Greig, CTV OB, technical director. “ETP, NBC, and Sky each knew  what they wanted and we were able to get rid of 2016 bottlenecks and have normal site surveys in October and April. Last year we could only do it in December.” 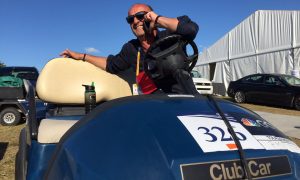 This year’s production will make use of 178 cameras, 27 of which are RF. One addition this year are three POV cameras located on the player’s bridge to show them walking from the practice green to the first tee. There are also 10 bunker cameras (six on course, three at the practice range, and one in a bunker at the putting green), five railcams, three Inertia Unlimited Xmos, and a CAMCAT Colibri which is used at the range.

The team at CTV OB was also able to solve some bottlenecks that existed last year. Workflows have been improved and the newly expanded Technical Operations Signal Circuit Allocation (TOSCA) area exemplifies those improvements. Last year’s TOSCA fit in a small cabin and consisted of two Snell Sirius 800 routing switchers (each backing up the other), 84 Evertz multiviewers, and more than 300 AD/DA converters. 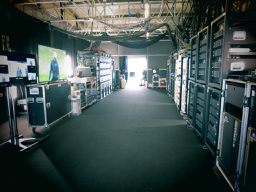 The new TOSCA system is housed in an 8×18-metre facility instead of a small cabin.

“This year we built an 18×8-metre building instead of a cabin and it also includes quality control and media management, has the EVS servers, and an extra technical operations center,” says Greig. “There is also a third 288×516 Snell Cygnus router for Sky, TV Asahi, and the BBC, additional AD/DAs, and an Axon Cerebrum control system and ProBel Aurora control systems.”

The team in the super-iso room is one of the most important in the compound, ensuring that the main production gallery never misses a shot on a green and more via three eight-channel EVS XT3 replay servers (a total of 38 eight-channel EVS XT3 servers and two 12 channel XT3 servers are in use across the compound by various entities). The super-iso team also keeps an eye on the majority of the players on the course so that the main production gallery can zero in on those at the top of the leaderboard.

Next door to the super-iso/replay area is the main replay-submix area with two directors and four EVS operators creating features and additional replay packages via four eight-channel EVS XT3 replay servers. The teams in both iso-relay areas work hard to ensure that all the storylines on the course are covered properly. 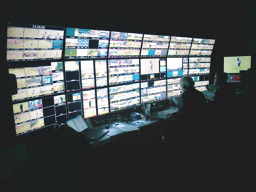 The front bench area for The Open world feed.

The third component in the broadcast center is the main production gallery, featuring a Grass Valley Kayenne production switcher with five mix effects and 10 DPMs.

The large broadcast center and TOSCA area are complemented by approximately 23 production vehicles, including OB 1, 3, 6, 7, 9, 10, and 14 and related support vehicles. OB6 is on hand for the Sky Sports coverage of The Open Zone alongside a Telegenic 19 that is being used by Sky as its main show truck. NBC Sports is also making use of CTV OB units as OB9 handles audio communications and the audio-effects mix, the early morning EVS operations, and the vision area.

CTV OB10, meanwhile, is on site for coverage of the marquee groups as well as for scoring operations and the main audio mix. The production area also serves as the ultimate backup in case of catastrophic failure in the main production center, with 28 cameras shaded in OB10 . And OB7 is handling the operation of 11 Pro Tracer units (eight on tee boxes, two on fairways, and one on a green).

Another change from last year is that MVT1 is now producing first and 18th hole coverage (last year it just offered up coverage of the first hole). The production team has its own four unilateral cameras and will work out of MVT1 alongside the commentary team. And CTV’s OB3 is on hand for a similar function as it creates the three-hole feed (with complete coverage of holes 12, 13 and 14) for streaming distribution.

CTV’s RAT (Remote Antenna Towers) mobile unit is also onsite with two production areas: one for marquee-group commentary and another for Hawkeye green mapping. Greig says he first saw the Hawkeye green mapping at the U.S. Open in Chambers Bay in 2015 where it was used by Fox Sports. Greig says advances have made the contour overlay much more natural and the putting line has been improved as well.

MST Systems is on hand in a cabin for scoring graphics for Sky Sports  and the world feed where teams make use of both ChyronHego and Vizrt graphics systems. An RF-camera cabin, meanwhile, handles all the control and transmission needs of 27 RF cameras on the course. An RF-audio cabin handles 72 channels of duplexed communications, 49 high-power radio mics, and 64 additional low power wireless mics as well as frequency coordination.

“I am incredibly proud of my team who have delivered outstanding facilities from a lumpy field in Southport,” says Greig.