Live from the Open: ESPN ITV delivers BBC coverage to US viewers via CTV OB 9HD 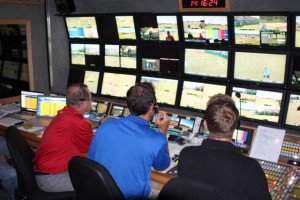 ESPN’s ITV team inside CTV OB 9HD at the Open in Muirfield.

ESPN’s ITV production is staying in a UK state of mind for US viewers, following up its production work at Wimbledon with a four-channel service from the Open, being played this year at the Muirfield golf club in Gullane, Scotland.

“There is a lot of continuity this year as the layout is the same, the production trucks are the same, and there is continuity of personnel,” says Donald Colantonio, senior director of production enhancements and interactive TV. “We are doing three channels for DirecTV and E3 and then a fourth for ESPN3 which is the Open Live, a channel produced by IMG for R&A that has backstage interviews.”

This year’s coverage, which is produced out of CTV OB 9HD, featuring a Grass Valley Kalypso Duo HD/SD vision mixer with four mix effects, a Calrec Alpha 100 audio console with BlueFin technology, and SonyHDC-1500 cameras and Sony lenses. CTV OB’s MVT 1 unit is also being used to sub switch the BBC’s world feed and the BBC’s channel that covers holes 7, 8, and 9. MVT 1 has a Grass Valley Kayak HD/SD vision mixer with two mix effects and a Calrec Zeta Digital console.

“We take the BBC feeds and integrate our commercial breaks into their coverage and also can roll in elements off of an EVS server,” adds Colantonio. “A couple of years ago we would punch the router but now we have a switcher and audio console so we can do fades, dissolves, and clean transitions as well as roll our own opens.”

The two BBC channels sit along side a third ITV channel that has coverage of holes 1 and 18 as well as coverage of the driving range.

“We have one camera on the first tee and a hard camera behind 18 as well as a handheld on 18 so we can do unilateral coverage of those holes as we have access to the network’s cameras,” adds Colantonio.

ESPN’s ITV coverage of other tournaments like The Masters and the US Open have featured coverage of groups as they move through the course but given the vast number of cameras at the Open, both the BBC and ESPN basically each produce separate shows that use about 55 cameras each, and the RF congestion the decision was made to leave that level of coverage aside.

“Given the amount of cameras operating inside the ropes we really need to be unobtrusive,” says Colantonio.