Live from The Open: European Tour Productions hits its stride at Royal Portrush 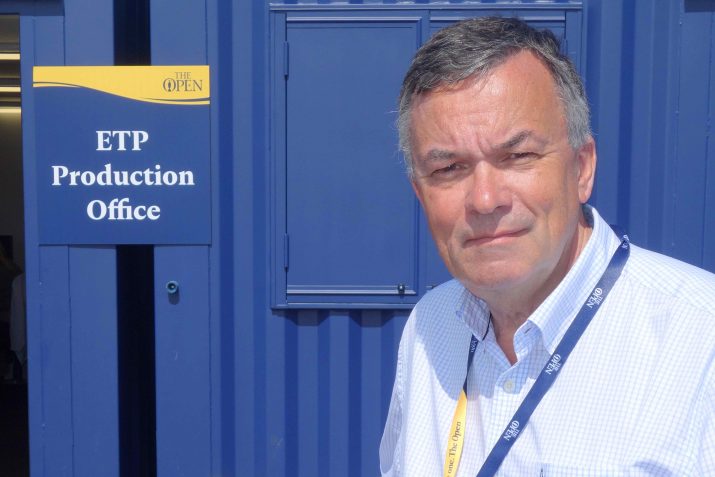 The 148th Open Championship in 2019 marks the fourth year that European Tour Productions (ETP) has been the television production partner for the Royal & Ancient Golf Club (R&A). ETP is responsible for providing the world feed from the sport’s oldest Championship, which is used by Golf Channel, NBC Sports, Sky Sports, TV Asahi and its other international broadcast partners and rights holders.

With The Open returning to Northern Ireland for the first time in nearly 70 years, SVG’s Ken Kerschbaumer and Fergal Ringrose took the opportunity to sit down on Saturday morning with ETP’s senior technical producer Stuart Cook to discuss golf coverage, the massive logistical challenge behind The Open production, and the experience of working with the local stakeholders in the town of Portrush to deliver a hugely successful sell-out sporting event.

“European Tour Productions are getting into our stride now, I would say,” said Cook. “We can produce good golf; that’s bread and butter for us, it’s what we do — even on this scale, with our Ryder Cup experience.

“Not only do we produce the world feed, we also take a coordination role between all the other on-site broadcasters. We’re the go-to people. We facilitate all of the other broadcasters on-site, although they’re off doing their own productions.

“This year has been the best Open for us. I think when the R&A awarded the contract to European Tour Productions to produce the world feed — and NBC, Golf Channel and Sky Sports got involved – I don’t think that knew what they were unleashing!

“The resources that the R&A, European Tour Productions, Sky and NBC are putting into it are off the charts compared to what went on before. So suddenly we’ve become a massive consumer of real estate, resources and the R&A’s time.

“But we have also brought to the party is great cooperation. I think the new partnership was a bit of a shock to the R&A because the whole television production just mushroomed.

“I see myself as a coordinator of television facilities. I’m the main point of contact between the R&A and all the broadcasters. The R&A folks now know that if someone asks me for something and I ask them, we really need it — we’re not just asking for fun. That’s made this year a lot less stressful,” said Cook.

Fergal Ringrose: The Open is back in Royal Portrush for the first time in 68 years. What have been the key challenges in coming over here for the event?

“Well they’ve had big championships here before, like the Irish Open and the Seniors Open. We’re on public land here, on council land, so we’ve had to deal with the council and the residents.

“The TV compound is situated on a public car park, where the locals normally park to walk their dogs. Last year at Carnoustie we were completely isolated.

“This has been a different experience. But actually everyone at the council has been 1000% behind this. 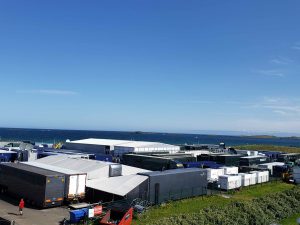 View of the TV compound at Royal Portrush

I’ve been coming here for two years now and I’ve noticed that the town of Portrush has had major improvements to the infrastructure, including the railway station. The road from Belfast has been massively improved. So the whole area has benefited from The Open coming here.

“Because we’re in the town centre here, we meet the residents every day going to the beach or walking their dogs: I would say they are 99.9% behind us, even though we’ve inconvenienced them massively by taking over this big car park for four weeks in total. Everyone is so supportive.

“With the collaboration we’ve got with the council, residents, local businesses and the greater understanding of the R&A in relation to just what a massive consumer of resources television is, it’s been an absolute dream year this year.”

Ken Kerschbaumer: If the compound was not located in this public car park, what would have been the alternative? This is the first time the compound has actually been located on tarmac rather than grass?

“The way it works is that the R&A’s advanced planning team decides where the TV compound is going to go,” said Cook. “For our first Open at Troon, we were in the middle of the golf course – which just made life very difficult for us, in relation to truck access and delivery of cabins and trailers, plus supplies like fuel and catering. Again they have learned that we’re such a big operation that being here, separate to the main golf course entrances, is a dream for us.

“We’ve got about 80 cabins here. Normally we’ve had to mark the grass out and lay trackway, and then we’d have to think very carefully about if we could crane a cabin into position from the trackway or do we need to put more trackway in and then take it away?

“Whereas here, the trucks can just drive in and park up. So the rate of build of the compound was much faster this year. For many reasons – apart from perhaps the weather! – it has been a dream this year.

“Although, having said all that, because the TV compound is so far to the west of the golf course, we have got a remote compound behind the fifth tee, in the public car park there. And again the local council have been fabulous in allowing us to take over a large section of the car park there. For the folks working at that end of the course we’ve got catering, toilets, buggy-charging and equipment stores.”

Fergal Ringrose: Of course ETP’s core business here is producing the world feed for broadcast partners. How has that production evolved and have there been any innovations this year?

“When we took over the world feed four years ago I think we revolutionised it by having more cameras so that we could fulfil our commitment to at least archive every shot into the green and every putt of every golfer on every hole. That meant many, many more cameras.

“We don’t commute cameras; they are rigged and stay rigged for the week in the same place. We’ve introduced Toptracer; the data slab and the trace in the slab; the Hego virtual graphics on which we now use MST paint; and Virtual Eye. The virtual graphics look so good you almost can’t tell the difference between them and the live video. 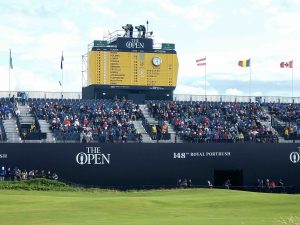 “We have gently evolved what we do without going too mad. On our first Open at Troon the bunker cameras were fabulous, in my opinion. That needs planning; we’ve already put in the bunker camera housings and conduits for next year [at Royal St George’s] and soon we’ll start thinking about going to St Andrews.

“Golf is a gentle sport and you can’t go too mad with your coverage, in my opinion. Golf fans like to see it presented how it has always been presented, because it works. If it ain’t broke, don’t fix it.”

Ken Kerschbaumer: This is a huge undertaking. What can you say about how your team has performed in producing the world feed for The Open at Portrush this year?

“With tremendous pride, at eight thirty on Monday morning we watched the OB trucks rolling into the compound having come direct from the Scottish Open. I think they came off the air at quarter past nine on Sunday night at a golf course to the east of Edinburgh, and less than 12 hours later they had travelled across Scotland, crossed on the ferry, driven across Northern Ireland and were rolling into the compound here. That’s how we roll on the Tour with CTV.

“I was sitting at my desk at nine o’clock last night thinking, ‘we’ve been doing this since six-thirty this morning and the quality never changes. We’re like a machine really!’

“For our staff and CTV and some of the suppliers it comes off the back of the Irish Open, which was a Rolex event; from Lahinch in the south of Ireland to Edinburgh to do the Scottish Open – with long hours and more facilities then the Irish because we did a marquee group channel there – and then everybody comes here,” said Cook.

“And next week we’ve got two events: the British Senior Open in Lytham and the Ladies Evian. And the week after that we’ve got the Women’s British Open!

“It is relentless. We can do 14 hours a day on-air here and yet it looks like everyone’s had a month’s holiday before coming here. So credit to the whole team; they’re just unbelievable.”