Live from The Open: How the Broadcast RF team brings pictures to the world 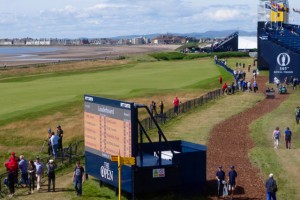 Broadcast RF is at Royal Troon in force, supplying a complete turnkey global RF operation on-site for The Open Championship. Included in the line-up are six handheld cameras, two marquee group handhelds and a Steadicam for European Tour Productions; four handhelds for NBC; three for TV Asahi; and two more for Sky Sports presentation, plus an IMovix X10 RF camera. The OB provider for The Open, CTV OBs, is also supplying some of its own RF camera kit on top of this list.

Broadcast RF Technical Director Mark Houghton told SVG Europe, “we’re providing RF cameras for multiple clients, plus a fixed-wing aircraft beauty shot camera which is a joint undertaking with CTV. We have engineers in charge of each client, providing a point of contact. But it’s a team effort here, with seven of our own BRF crew and three more from CTV.

“We’ve got a course-wide RF system with antennas on the two main compound hoists, plus the first, second, fourth, sixth, ninth, eleventh and eighteenth holes – sixteen antennas all the way around. We GPS track all the cameras so we know exactly where they are on the course, then we route the best combination into the diversity receiver, with the ability to mute cameras that may be noisy,” said Houghton.

“There’s a lot of redundancy in the system, with multiple antennas around the course. If one hoist goes down we don’t see a difference. There are fibre nodes around the course, so we can pretty much deploy a gap-fill antenna anywhere very quickly if we feel there’s a potential hole in coverage. We’ve got RCPs in different trucks, so we’re not controlling everything from one place. It’s a networked camera control system.

“The fibre on the course is built in, that’s a new system and makes a big difference to us – but there are challenges with the sheer quantity of fibre and lots of providers trying to use the same infrastructure. You can see that the patch bay over there is pretty busy!

“In terms of a single sporting event this is about as big as it gets,” he said. “Effectively there are 24 RF systems on the course, including the wire cam on the eighth which is actually wireless. It’s pretty busy, if you add in the 70-odd channels of radio talkback as well from CTV.

“This year is hectic with the Euros and the Olympics, and we’ve had to slot this in between,” said Houghton. “The final box for the Olympics was actually shipped today! We’ve been sending stuff out over the last three weeks. There’s no overlap with this event, but there is with the Euros – some of this stuff was also used in France.

“Golf is a big challenge. One stipulation the R&A have is they don’t want a second person holding a pole for RF coverage – which of course would keep the weight down and help with battery usage. The R&A insist on standalone operation, so the cameraman has to carry all the equipment. They don’t want to see clutter around the greens,” said Houghton.

“We work with Vislink, using their L1700 microwave transmitter and Omni antenna. It’s a very lightweight system: if you go back five years, the transmitter alone would have been heavier than the whole pack now. Even though they’re roaming around the whole golf course, the camera operators are happy. So far so good here; early starts and late finishes — pretty much a normal golf event!”