Sunday morning at The Open in Royal Birkdale and it’s looking like Jordan Spieth’s tournament to lose. Spieth – the only player to have finished under par in each of the first three rounds – holds a three shot lead from fellow American Matt Kuchar, with the chasing pack two shots behind.

BBC Sport is back out on the course with live radio and online coverage plus a two-hour TV highlights show each evening on BBC2. The BBC Sport website and app streams the live radio and TV highlights, while a daily live text commentary provides latest scores, analysis and the best of social media, plus up to six minutes of in-play video clips every day.

A major change for TV coverage is the introduction of Edinburgh-native Eilidh Barbour as lead presenter for her first major championship, taking over from Hazel Irvine who helmed coverage for 25 years. Barbour works alongside a TV commentary team comprising 86-year old Peter Alliss, Ken Brown and Andrew Cotter.

SVG Europe spoke to Jonny Bramley, Executive Producer Major Events for BBC Sport and Jonathan Fay, Technical Manager CTV for BBC Sport about the challenges of producing a two-hour primetime show each evening rather than being a live golf broadcaster. 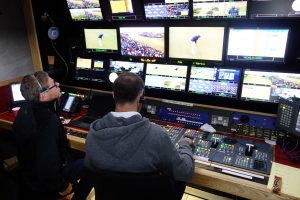 “The main focus of the way we produce our highlights show – acknowledging the fact that the BBC is no longer the live broadcaster, that’s a job that Sky Sports does with host coverage, very much catering for a knowledgeable golf audience – is that it’s our job to bring this to a wider audience. We need to think more about how the programme is put together to make the sport more understandable and accessible. Therefore as well as wanting to tell the really good golf stories of the day, we try to bring the whole event and its players out to a wide audience,” said Bramley.

“As well as adding our own commentary this year we’re also trying not to make it all too serious, so that it can be a little bit light-hearted while making sure the explanation is there. Of course we also want to tell the drama of the story: we have a new presenter this year, Eilidh Barbour, and we’ve tasked Eilidh with getting out and about rather than being in the studio permanently. We want her to go out to the various parts of the course and try to reflect the atmosphere out there and talk to people who have been following the matches – and try to really explain what it means to be at The Open,” he said.

“We try to simplify the operation and we don’t want too many cameras out there getting in the way; it’s quite a busy working environment anyway. As well as our own studio here we have one ENG camera moving around recording pieces.

“We feel Ken Brown is one of the unique selling points of our coverage,” said Bramley. “We’re encouraging Ken to do as much as he can to provide something different and quirky. He’s a huge hit on social media and it’s another one of those things we try to encourage to make our coverage a little bit different. We make sure we tie in with BBC social media and pre-release some of Ken’s pieces during the day, which helps direct people to our TV coverage.

“Currently we’re taking the world feed graphics and we have the addition of one MOOV graphics operator here, Tom Gray. The key for this operation is the editing. We’re compressing the day’s play, topping and tailing the programme and creating various sequences. We have our regular golf editors here who’ve been working together for years. The understanding the team has is as much key to our operation as the technical side,” he said.

“Sharing shots is very important. We have access to the European Tour Production servers so we can pick up any golf shots that might have been missed in main coverage or anything else we might need.

“We’re trying to bring the viewers closer into the action,” said Bramley. “Maybe in the past we’ve been a bit too studio-based. Now, viewers expect presentation to be in amongst it. We’re also pulling in different arms of the BBC to do that. For instance some of the guys from Radio Five Live record pieces with players, for the TV show. It’s really tying it all in together,” he said..

“If we could rely on the weather we might not have a studio at all!” added Jonathan Fay. “That feeling of being out on the golf course is the key. 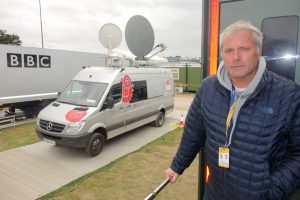 directions sometimes,” said Fay. “We may not be showing live golf, but we’re still here all day making use of live golf. And then afterwards we’re transmitting, trying to squeeze maybe fourteen hours golf into two hours.

“We have to go with a lot of hunches during the day as to how it’s going to pan out,” he said. “You could get someone going out really late who goes through the field.

“You’re going to see something rather different on the BBC highlights programme in the evening than you see on the world feed during the day. At the Masters we do two days recorded and two days live: we all breathe a huge sigh of relief when we get to the live days, because we know the format it’s going to take and it’s actually less of a challenge,” said Fay.