Live from The Open: Sky Sports gets in the Zone to enhance its Championship coverage

Sky Sports is using its Open Zone in new ways to get closer to both players and the public in its role as the UK live broadcaster from Carnoustie.

On Thursday and Friday Sky Sports The Open channel is on the air from 6:30am to 9pm. Featured group coverage of the 147th Championships is available each day via the red button and on the Sky Sports website. Viewers can also track players’ progress in Featured Hole coverage on the red button, with cameras focusing on the eighth, ninth and 10th holes.

Specialist programming is available to download via Sky Sports On Demand, while Sky Q viewers can catch-up with clips and highlights from each day and explore our entertaining features. There are also highlights, documentaries and The Open Verdict on Sky Sports The Open, with live updates, interviews and reaction on Sky Sports News HQ.

Live text commentary from first tee to last is available on Skysports.com and Sky Sports’ mobile apps, with behind-the-scenes coverage available via the Sky Sports’ Facebook, Twitter and Instagram accounts. 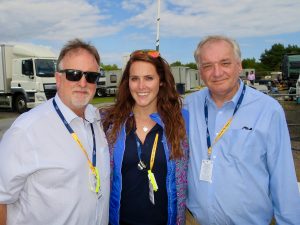 Sky Sports has a team of 186 people on-site in Carnoustie for The Open, which includes Sky production and technical staff and the team from its OB provider Telegenic. Everything for the live broadcast is on-site, with another team back at Sky Centre in Osterley producing highlights packages.

In the Sky Sports production cabin at the TV compound, lead production manager David Culmer and golf pundit Butch Harmon told SVG Europe how The Open Zone is taking a more central role for its unilateral production, alongside the regular glass-walled presentation studio by the 18th fairway and the now-established Smart Cart behind the 18th for instant player reaction as they come off the course.

“This year we’re trying to get the public closer,” said Culmer. “As you can see at the Open Zone the barriers are very close now, and with the R&A we’ve now introduced a raised section so we can get more people in there, and more people can see what’s going on. That I think is crucial to our operation: getting out there and getting people involved.

“We’ve refined what we’re doing: the emphasis has moved away from the big glass studio – which we still have, of course – but more of it is coming down to the Zone now,” he said.

“For instance, we don’t have a touchscreen in the studio; that’s all done in the Zone. The VR is done in the Zone now, rather than in the big studio – the walkthroughs and the animations with players standing there looking at virtual holes. The jib has moved down there for that.

“In fact the studio was a more challenging environment for the jib, as we were having to put grafitti above the studio window so that the Ncam tracking system could find edges,” said Culmer. “The studio window has soft edges: down at the Zone there’s all the scaffold trussing and the edges of the touchscreen and all the other devices, that actually make it much easier for the Ncam to work out what it is doing.

“And we’re trialing some new lighting panels in the Zone. We’ve got some big flat LED panels there now, helping to keep the lighting consistent,” he said.

“We’ve got the bunker there as well, with the Bunker Cam; personally I think the Bunker Cam shot looks superb this year, with the background of all the players practicing on the range. I’ve got to commend Aerial Camera Systems for putting the Wire Cam in – it’s the longest Wire Cam I’ve seen!”

Butch Harmon added: “The Open Zone is good, very popular. My son Claude does most of it. Where we have a difference to most people is that, because we’ve coached all the big names, we don’t have to ask them – we just tell ‘em, ‘hey I need you to come over here!’ If that was a production person approaching them, the answer would be No.

“The players like going in there. It’s a relaxed atmosphere: we just try and ask the question and let them talk,” Harmon told SVG Europe. “For instance we had Bubba Watson in yesterday: now Bubba’s not a person anybody really gets close to. But he had a ball in there: he was so relaxed and had fun.

“It is fun – for presenters, the players and for the public who take part. We have an extra tier now so it’s 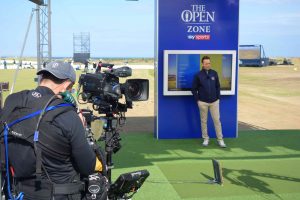 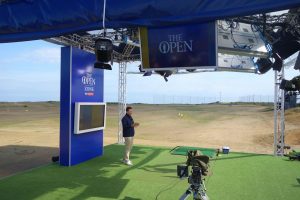 like a little amphitheatre. We’ve turned the TV screens around so people can see what’s going on. And it’s good to get the interaction with the people there,” he said.

“The guys [players] have gotten used to it now, they don’t mind coming. They know we’re not going to throw them under the bus. We tell them in advance what we’d like to do, and if they want to do something else they can just tell us.

“We let them have the stage. The people at home never have the opportunity to get that close to them – so it works out pretty good,” said Harmon.

What are the advantages of dialing back the big studio presentation and moving more of the production elements to the Open Zone?

David Culmer: “I think it is engagement with the public. We can do more. In the studio you’ve got talking heads; out on The Zone, you can get people hitting balls. We’ve got the 99 yard challenge this year, and all sorts of people are coming in. They seem to enjoy doing that.

“And the putting on the Zen Green – that’s now part of the show. I believe their ultimate aim is to map the greens on the course, and then dial them into the Zen Green so they can say, ‘that putt Rory just missed, let’s have a go at it’. Our pros can have a go. I don’t know how far down the line that is!”

“You still need the studio presentation,” he said. “You need it for continuity, and people are used to it. You still need to be able to sit down and analyse what players have been doing; the players are not always available, and we can still take those clips and float them into the discussion. There are some things that warrant seeing again and talking about again. People like Butch can analyse in the studio in a different way to the professionals down in the Zone.

“And of course the players will go to the Sky Cart when they come in: they do like to spend time there,” said Culmer. “Once upon a time we were lucky to get 30 seconds – now they’ll stay there all day! Some of them like operating the Cart themselves, looking at their shots. It’s a useful tool for them, for us and for the people watching at home.

“We have three production managers here. I’m doing the early shift, Chris Sandeman is doing the late shift and Katie Harrison has just joined the team as a manager – she was a coordinator before,” said Culmer.

“We need an extra person to keep an eye on OB6 and The Zone, because when The Zone is not being used with our main truck T18 when it’s on golf, it is doing pieces for the internet. They’re keeping that activity going in The Zone so people on their phones and iPads can still be taking part in things there and people can watch The Zone on their phone while they’re watching the golf on TV.”

Have you added any unilateral cameras or other elements this year to enhance your coverage of The Open?

David Culmer: “We’re using the latest Hi Mo camera, the iMovix, from Fletcher. However the radio cameras we use here aren’t so much getting golf, they’re getting colour. We like to see the reaction of the crowd, when someone makes a great shot. That’s not done by the World Feed; they just concentrate on the golf,” said Culmer.

“European Tour Productions cover the golf; we tell a story. We go on the air, we build the expectation 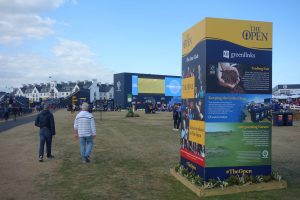 with our little pieces, then we get into the golf with bits from The Zone – and at the end of the day we’re still there, rounding the day off and wrapping everything up. That makes a rounded story, rather than just golf coverage.

“I think that’s what the viewer wants. We take the World Feed golf, and then [director] Mike Allen brings in all the extra bits we’ve got. But European Tour Productions does cover the golf they we like it covered. We’re trying to provide continuity and variety,” he said.