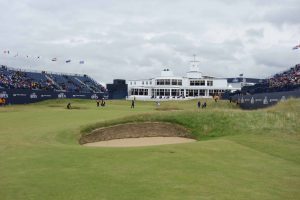 View of the 18th green, clubhouse and Grandstands from the fairway — with one of Royal Birkdale’s fearsome bunkers looming in the foreground

It’s Saturday at The Open and the players are back out on the Royal Birkdale course for Round Three. At six under par, Jordan Speith holds a two-shot lead over Matt Kuchar, with local English favourite Ian Poulter lurking one shot further back. For Sky Sports the action is an opportunity to provide closer access to the game of golf and to the star players, following its inaugural year as live UK broadcaster for The Open in 2016 when it took over domestic rights from BBC Sport.

After 60 years of continuous BBC live coverage, in 2016 at quite short notice the Royal & Ancient tasked European Tour Productions with host broadcast coverage of the Open, working with its regular OB partner CTV. As last year, for the 2017 Open Sky Sports has worked closely with ETP, CTV and also regular OB provider Telegenic in order to map out World Feed coverage that will also work best for Sky’s domestic UK output.

This morning Sky Sports Head of Operations James Clement told SVG Europe that Sky works closely with ETP and CTV OB to choose the best toys to add on to the core golf coverage.

“It’s so that everyone can benefit and then at Sky we add on our studio, Open Zone and cart presentations around that,” he explained. “ETP does golf coverage very well, so we leave it to them to cover the course. We can share some of the more artistic cameras — jibs and Eagle Cams and the like, we share the costs so we can have them as iso feeds. And we discuss new things like if we want ProTracer-type [enhancements] on our coverage they will be put onto the World Feed multilateral; that’s a lot more straightforward than us trying to add those features as a unilateral broadcaster.”

Sky Sports broadcasts plenty of golf from the US and Clement says that when it covers golf events in America Sky needs to supplement the [host] golf quite a lot in order to get a European angle.

“At the US Open for example, we took a lot of individual iso camera feeds and turned around a number of golf holes ourselves, as we wanted to see [European] players who wouldn’t otherwise be covered,” he said. “Here, we don’t have to do much to the golf itself. We can focus on the unilateral.”

Last year’s transition from BBC Sport to Sky (and also to ETP for the host feed coverage) was on an accelerated schedule as the decision was not made until the end of 2015. This year the Sky team and all involved had more time to prepare.

“Our own golf coverage has evolved over the last year anyway, as you’ve seen with The Open Zone,” said Clement. “We’ve had more time to focus on what makes that great and really cement it into our coverage. We’ve had more time to plan and work with the R&A to get it right. This year, hopefully, with more time we can produce the event more efficiently and cost-effectively.” 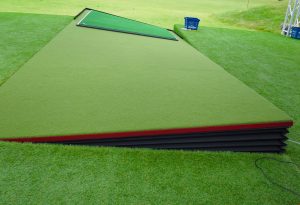 This year the biggest single Sky innovation – certainly the most talked-about – is the Zen Green in The Open Zone and the construction of a bunker next to The Open Zone. The green is designed as a coaching tool and uses hydraulics different parts of the surface up and down so it can recreate different green contours.

“Ever since we started adding the touchscreens – for golf or F1 or tennis – the athletes, the players, the drivers interact with their own content immediately and we found that they stuck around for a considerably longer time and gave us far more interesting interviews,” said Clement. “They could analyse their own material best themselves. They can critique their own performance way better than we can and they can talk us through their key moments: what they saw rather than us having to do a cold interview and then our own analysis afterwards.”

“The players can actually demonstrate where they were and whether their play was strong or weak on a certain shot,” said Clement. 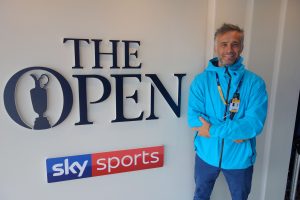 Sky Sports Production Manager George Jeffery added: “No disrespect to our regular audience, but your 40 to 60 year old golf fan will continue watching golf whoever is presenting it: however you need to engage a younger audience. Part of that is The Open Zone engagement with Claude Harmon and Nick Dougherty doing coaching and talking to players is much more engaging. Claude has such access to the players; he can bring them in. If we didn’t have Claude there we might struggle with the American players. Nick is key to getting the European players.”

Along  with the Zen Green and the bunker is the ChryonHego touchscreen, Trackman data and Toptracer ball-flight. 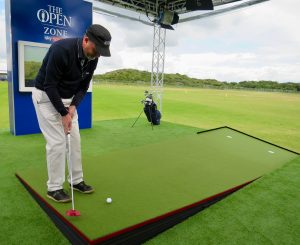 Nick Middleton, MD and founder of Zen Green Stage, provided some golf-coaching perspective as to how the platform works and how it helps golfers. “Sky committed to this for a major event. We did have some challenges early in the week, specifically with electrical interference and the guys from Sky really believed in it and committed it.”

Middleton says the Zen Green has managed to generate a lot of content with the players and a different sort of content; the opportunity for players and coaches to collaborate.

“It’s not just short chip and runs, but the mechanics of putting,” he added. “And it’s been entertaining as well. Little kids have come in and had challenges with players; today we had Andrew Beef Johnston and a little lad on here for a challenge and it was fantastic. I think it’s been a really big success.”

The Zen Green is flexible enough to do double-breaking putts where the actual fall-line changes 180 degrees along the length of the putt.

“We look at all of the putts within the makable range,” said Middleton. “It’s about learning to green-read. If you immerse the player in the environment that is typical of that in which they will be playing, then you can improve the motor control and the perception in order to be able to complete the task.”

Regarding the purpose-built bunker in The Open Zone, George Jeffery said: “This is the first time the R&A has built a bunker in the practice range to demonstrate shots. I think the R&A had the real estate to do it; and they were willing to do it. I think they saw that the innovation was really positive. And I think the players see it as a benefit as well, as it’s exposure for them.”

Sky Sports Head of Directors Duncan East provided another view of the physical innovations introduced by Sky Sports this year on The Open. “The Zen Stage has been the really new thing we’ve added this year. We’ve played with virtual reality and augmented reality, the player walk-throughs and things like that with the touchscreen on our presentation. 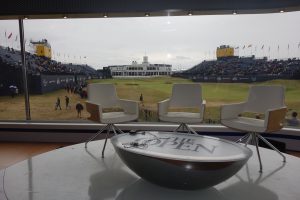 “That was always our wow factor. What’s really interesting here and for me – being a golf fan – going back to basics has delivered the wow factor: that’s The Open Zone. There’s nothing like getting someone play golf; and let’s see them doing it. Get them to re-enact shots – the players love it. With the Zen Stage and the bunker, getting them to play little competitions between each other, and also the interaction between players and fans,” said East.

“Really simple Q&As, it’s not rocket-science. It’s basic TV! But ultimately it’s getting access to the players and getting the best out of the players. There aren’t many sports in which the players want to be involved in what the media are offering.

“It does feel like we’re taking broadcasting back to basics, making it a bit more real,” said East. “We spend all this time and effort and money trying to create beautiful things that are not real; actually let’s watch somebody swing and hit the ball.

“For me it’s another innovative step, but with simplicity. Innovation through simplicity. You’ve got to get these things right; you could try it and it would be a bit of a mess. But it’s very well executed and run brilliantly by our talent, who drive it superbly. They’re the ones who really make it sing.”