There is a combination of standard and AR graphics used in the Rugby World Cup host broadcast match production. In addition to established graphics such as team line-ups, player ID and permanent clock and score, the HB draws on data coming from the Tournament Information System (TIS), delivered by AE and Opta. This encompasses offsite data collection by Opta and delivery of on-screen graphics by AE.

This is AE’s second consecutive Rugby World Cup having delivered the same service in 2015.

“2019 has been a huge year for AE with the Rugby World Cup coming hot on the heels of the Cricket World Cup for which we also delivered an extensive graphics service,” explained AE chief commercial officer, Stuart Coles.

SVG visited the IBC facility to witness AE’s graphics operation first hand and were given a tour of the facilities by AE operator training and development manager, Will Squires. “On all matches, we’re providing standard world feed graphics, big screen graphics from our teams at the stadium, and then here at the IBC we’re providing an Ultra HD feed and a Japanese-language HD feed,” he explained.

“And on top of that, for 32 matches we’ve got Spidercam AR graphics – and on a minimum of six, we’ve got a Japanese Ultra HD feed as well, which will come from those grounds for those games. 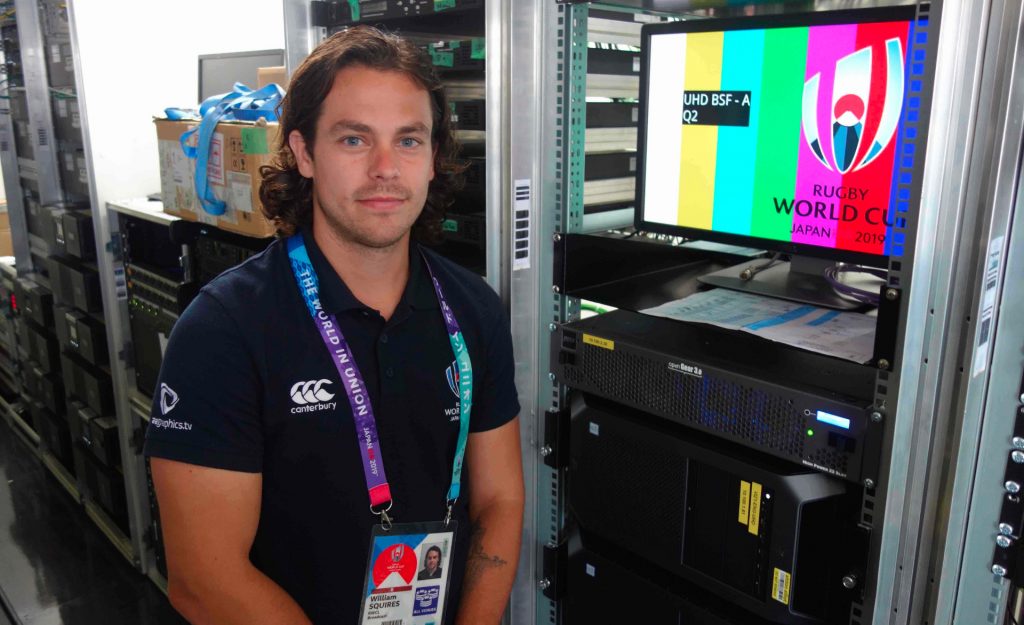 William Squires, Alston Elliot operator training and development manager, in the MCR at the RWC IBC

“We work with Spidercam taking data from its Vector system to calibrate our graphics so that we can provide augmented reality content on the pitch. Those graphics appear on the world feed, so we always do an ident, team sheets and it basically adds a little more impact and creativity to the production.

“We have 31 people here overall. Five of the tech crews include AR specialists, covering the stadiums where AR is provided. Those people are ensuring that the data is being received correctly and that our graphics content will remain locked.

“The communication between software is a massive part; the commands, clock control and Opta stats all come into the stadium and then travel down the TIS network to here, where our software processes it without our operators really needing to do anything too complex.”

“As this is such a high-profile event, as you’d expect, there is a huge amount of redundancy in place, our ethos is there should be no single points of failure. The TIS runs on a fibre network across the country, from venue to venue and there is a secondary line running at all times to guard against technical failure.

“Our graphics engines, both onsite at match venues and at the IBC all have hot spares that can be deployed at a moment’s notice. The engines at the IBC are being driven by commands sent from the operators at match venues, automatically and simultaneously generating graphics remotely. However we have IBC staff onsite monitoring each feed and, in the event of problems being encountered, they can override and control the engines locally.

“In terms of the IBC set-up, as I’ve said we provide two Ultra HD match outputs and two Japanese HD outputs. We basically have an A and a B for everything. On any match day where there are multiple games, due to the length of the world feed window, we are already on air with the second match before the first one has finished so we need to be able to cope with that.

“Our suite of software applications is really the key aspect of our solution, handling all of the offsite and onsite data capture, timing, operator commands and remote messaging through the TIS network. Essentially we want to make it as easy as possible for the operators, within a few keystrokes they need to be able to get any graphics to air as quickly as possible. 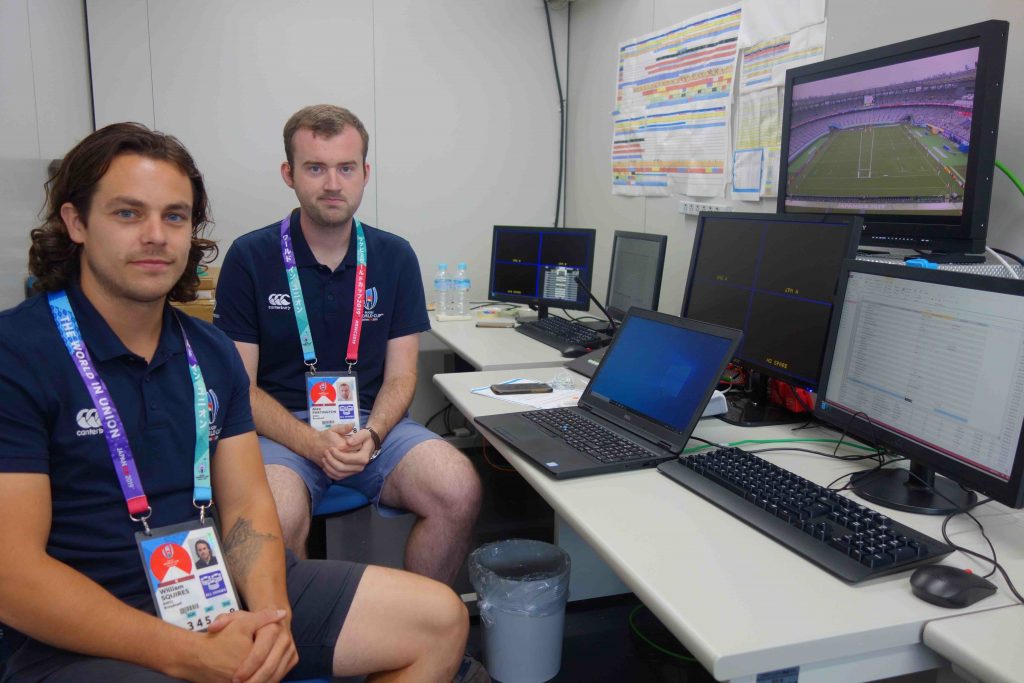 “The communication between software is a massive part; the commands, clock control and Opta stats all come into the stadium and then travel down the TIS network to here, where our software processes it without our operators really needing to do anything too complex,” said Squires.

“The only other thing we’ve had to do for this particular World Cup is a Japanese translation from our feeds. We have a database here that contains all the information concerning players, squads and stats. We also have translations, for all the different terminology used on our graphics.

“What we have had to do, on top of making the direct translations, is allow for different meanings: for example, the word ‘points’ has three different meanings in Japanese, so ‘points scored’, ‘match points’ or ‘point table’ might be three totally different words.

“So in developing that we’ve worked alongside NHK over the course of the last year. Together we’ve built a database to make sure our world feed graphics are going out correctly in the Japanese language. Interestingly, some terms in rugby just don’t have a Japanese translation, so they sometimes just use the English term as there is no Japanese equivalent.

“Delivering multiple languages is something we are very comfortable with at AE, for example on cricket and kabbadi in India we are often delivering up to seven different language feeds but Japanese was a particularly tricky one and we are delighted to have added it to the list.”

With the pool stages now complete, AE’s team, along with the rest of the IGBS crew will get at least some respite before the quarter-finals weekend begins.

Coles is delighted with the way that things have gone in Japan. “This has been a great event to be involved with and we hope is a testament to the fact that AE is now well-equipped to deliver events on this scale,” he explained.

“We’ve really relished the opportunity to work closely with IGBS on a project for the first time and everyone has handled the unique challenges of delivering a major event in a country like Japan admirably.”

The 2019 Rugby World Cup in Japan continues until 2 November