The 2019 Rugby World Cup will pass the halfway point this weekend and for World Rugby, IGBS (a partnership between HBS and IMG) and rights holders around the world it also marks the halfway point of a new era in host production for the event.

Previously the responsibility for the host production fell on the shoulders of the domestic rights holder. But in 2016 IGBS was appointed host broadcaster, a move that has resulted in a deeper production with more content than ever for rights holders and rugby fans around the globe. 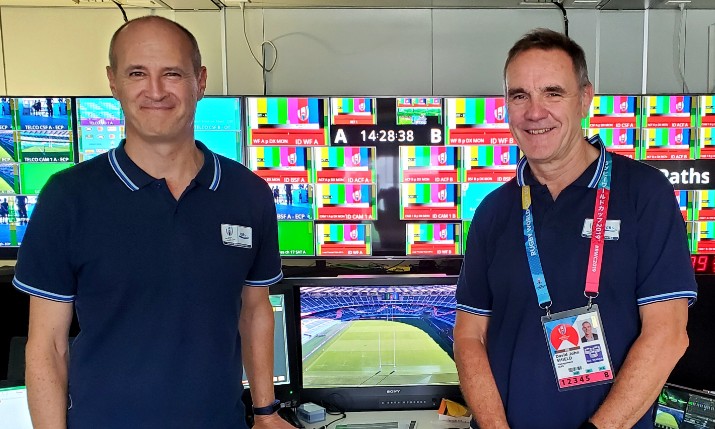 Project directors for the event are David Shield, IMG Media, SVP, global director of engineering and technology and Dan Miodownik, HBS chief executive. They oversee a team of more nearly 650 people and together bring a world of experience to the host broadcasting of the event.

“It’s been a really good partnership, and this is the first time we are working together on a team sport as previously we worked on the Asian Games, a multi-sport event,” says Shield.

“And it’s interesting to see HBS work because they are clearly focused on getting consistency to be part of the event. You look at this event and you say, ‘How difficult can it be to cover 48 rugby matches?’ But the difficulty is in making sure they all have a consistent approach and a host philosophy with all of the amount of overlay that brings, like supporting 50 commentary positions and standups.”

Miodownik says that IMG and HBS dovetail really well, and that is important given how much the production of the Rugby World Cup has grown since 2015.

“The event is just that much bigger and it’s the first it is in Asia and here in Japan and that’s great because this is a rugby playing country,” he adds.

“HBS brought a lot of experience from the World Cup into this event, like the live multi-feed concept that until now for a Rugby World Cup was just a world and clean feed.”

Looking at the way the event is being produced one can see echoes of the philosophy that is behind HBS work on the FIFA World Cup events. For the first time ever, all 48 matches are being produced in multiple formats, including UHD/SDR, 1080p, and 1080i.

“Having the live match feeds in 1080p and UHD lifts the event up to where it should be,” says Miodownik. “We have a broad production plan that has created a lot of content and the UHD quality will give World Rugby a really rich archive while also giving the broadcasters something with real value.”

Rights holders have access to not only the traditional World Feed but other live feeds as well: a basic stadium feed, a clean stadium feed, an additional content feed with things lie features and, during a match, clips, and a tactical beauty feed.

“HBS brought a lot of experience from the World Cup into this event, like the live multi-feed concept that until now for a Rugby World Cup was just a world and clean feed,” says Shield.

Along with the feeds are seven ENG TV crews that include a rugby expert producer, a cameraman, and an assistant producer.  They are focused on covering training, creating feature stories, and more, including creating fresh clips of replacement players in front of a green screen that are used for player lineups.

Life at the IBC 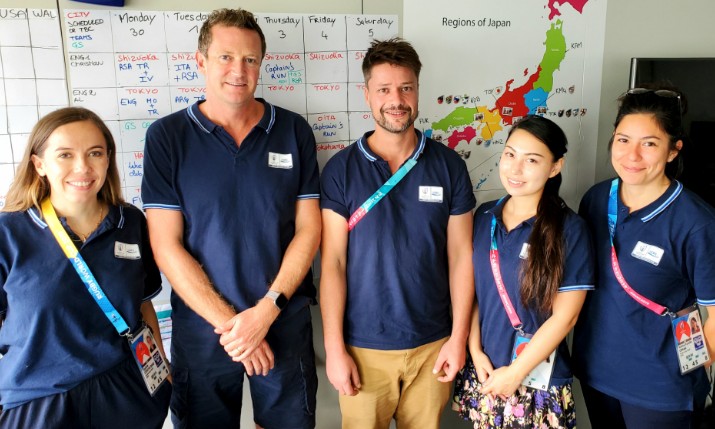 Miowdownik and Shield spend the majority of their time at the International Broadcast Center (IBC) which is located near Tokyo Stadium. Temporary cabins have been put in place to house master control quality control, cable interconnection, central equipment, a technical compound and satellite farm, a booking office, and unilateral areas. A digital team creating content for rights holder social media needs and a post-production unit is also on site.

“Something like The Open Championship used to need a complete parallel production but now it is much more relaxed, and rights holders let the host do it,” says Shield.

At the core of the match production are four production teams from France, the UK, South Africa, and New Zealand.

“Expertise in Rugby production lives everywhere, and we have been pleasantly surprised,” says Miodownik of the efforts to date. “We had workshops with the teams, and they are each bringing a different personality to it which is good. For example, they all use the Spidercam in a slightly different way.”

Eight of the stadiums are outfitted for Spidercams meaning that 34 of the 48 matches will make use of the aerial camera system.

“We did an analysis of the productions of the previous World Cup matches and how much each camera was used, and we came to the conclusion that there was no addition where the value for the money is greater than the Spidercam,” says Miodownik. “Our goal is to have a Spidercam of all the knockout games.”

“The logistics people have done a phenomenal job of moving people and equipment and it’s astonishing. And the patience of more than 600 people, many of whom are on the road for six weeks for the first time in their career, and dealing with a different culture, has been phenomenal.”

Also new this year is Canon’s Free Viewpoint system which is making its official world debut. Located in Yokohama Stadium, the Free Viewpoint system requires 125 cameras to be rigged in the bowl to capture volumetric images of the action and then synthesize all of that data into a virtual camera system that allows the operator to fly around and create replays that are truly unique.

“It’s developed a huge amount in the past four years as back then it would take months to process and now it is nearly live,” says Shield.

Clips from the system reside on the clip server that is available to rights holders. They can then take those clips and either air them after the match or even virtually work their talent into the images, something that RTE did earlier this week.

Alston Elliot also built out a new graphics package for the tournament and a small amount of AR is also being used.

“The graphics look is a modern, flat style that doesn’t have too much shine,” adds Shield.

NEP is in Japan with a multi-national effort that brings together four fly kits each from its UK and Singapore divisions.

Four of those fly packs are IP while the other four are SDI and, as the tournament progresses, they move from one stadium to the next.

Shizuoka Stadium Ecopa, City of Toyota Stadium, Kobe Misaki Stadium, Sapporo Dome, International Stadium Yokohama, Tokyo Stadium, and Ota Stadium all have 28 cameras (the additional being the Spidercam, two handheld cameras, and a hand try line camera on the left and right side).

Beginning in the quarter-finals that count rises to 32 with four corner flag cameras being added to the mix and the semi-finals and final will include two additional super slo-mo cameras (all cameras are either Grass Valley LDX 86 or Sony HDC-4300).

SOS Global has been tasked with the challenge of getting the equipment from venue to venue while NTT and Vidi are handling transport of signals from the stadiums to the IBC and Telstra is moving signals from the IBC to IMG’s facility in Stockley Park outside of London where additional post-production work is being done.

“The logistics people have done a phenomenal job of moving people and equipment and it’s astonishing,” says Miodownik. “And the patience of more than 600 people, many of whom are on the road for six weeks for the first time in their career, and dealing with a different culture, has been phenomenal.”

The Rugby World Cup 2019 continues until 2 November, culminating in the World Cup Final in Yokohama.