Given technological advances in remote production and some of the geographical and physical challenges involved in travelling around Japan, a number of major rights-holding broadcasters have chosen to locate a bare minimum of staff and resources in-country for coverage of Rugby World Cup 2019.

A clear exception at the tournament is ITV Sport, with a significant presence including its own MCR at the International Broadcast Centre by Tokyo Stadium. The UK broadcaster also has a number of reporting teams travelling around Japan, and its live team is presenting the knockout stages from two OB presentation studios which have been constructed at Oita and Yokohama.

ITV Sport decided to operate on a 59.94p island for its coverage of the tournament, which helps keep standards conversion to a minimum especially for edited or re-edited items. That island approach has been supported by its presentation base at Maidstone Studios in Kent during the group matches, before moving to the OB presentation from Japan for the knockout stages. 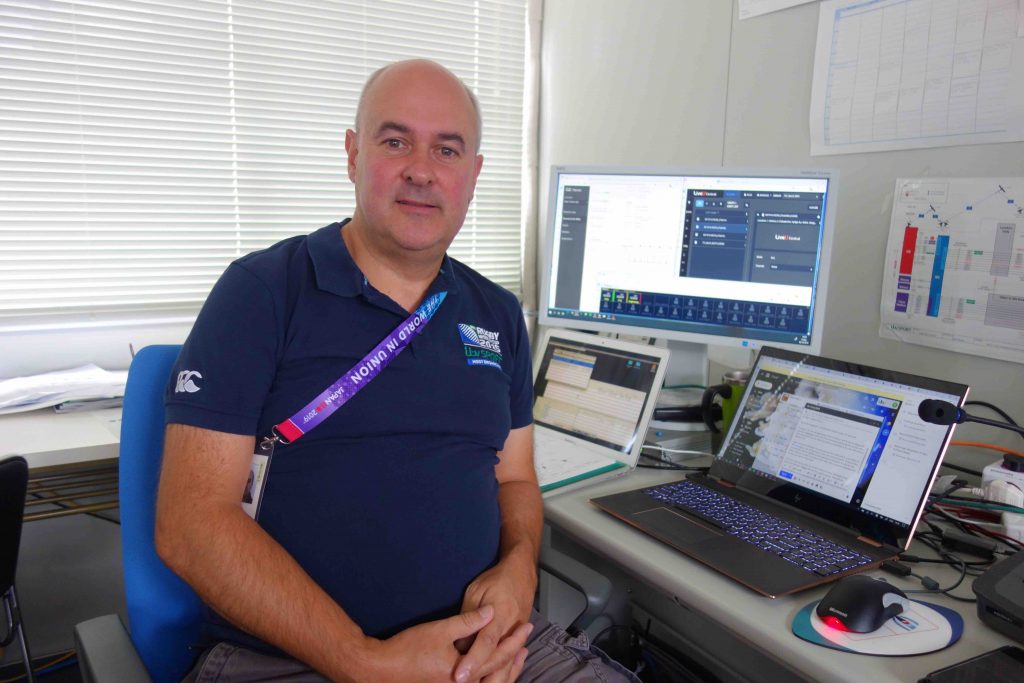 Technical consultant Paul Bateman told SVG Europe, “obviously four years ago was very different for us because we were in the UK and we were host broadcaster. That was a whole different perspective. So the last Rugby World Cup you could really compare this to is New Zealand 2011, but whilst the production plan is similar, we are pushing the boundaries once again.

“We’ve presented the group stages from the UK; we have an IBC presence throughout; we’ve got roving reporting teams throughout the country; and for the knockout stages we have OBs out here from the venues. That’s very much what we did in New Zealand.

“We have three commentary teams here and the three roving reporting teams, and three what we call venue inject teams, using host circuits back to the IBC to give us pitch side and a flash presence for all the home nation games and all major games,” said Bateman.

“What has changed is how we get things back, in other words circuits and connectivity. Back in 2011 we had a couple of satellite SNG trucks travelling around the country and crews had to meet up with them to feed rushes. Now we’ve got three reporting teams travelling around using LiveU to send a lot of material back.

“We’re also doing file transfers from here at the IBC as well, which again didn’t really exist in 2011. Globecast is providing Aspera connectivity and Globecast is managing our fibre connectivity back to the UK.

“Working in 59.94p means the file sizes the roving teams are using are much bigger – everything is double the size. So that whole media management work is bigger.”

“We can bring back anything from the World Rugby media server which they’ve called the TRI [The Rugby Interface], where our producers in Maidstone can browse that server and pick up what they want to send back. That is an automated process which arrives in our IBC space and goes onto the Aspera server, gets linked over to Maidstone and imported into EVS there.

“What we found at the last football World Cup is that the roving teams would use LiveU a lot, filing pieces needed urgently for a programme. But that material is compressed, obviously, and for archive purposes, you want to keep hold of the original material at full resolution. We’ve got a much more robust system this time, so that media comes back to the IBC and we file transfer it back over that same Aspera link.

“Working in 59.94p means the file sizes the roving teams are using are much bigger – everything is double the size. So that whole media management work is bigger, and we’ve added a location media technician to each of the teams to do the LiveU feeding and backing up, ensuring we’re transcoding and we don’t lose any material – helping to take the pressure off the cameraman and the producer on our teams. We felt that was important because of the file sizes and the extra traffic involved.”

ITV Sport has a number of different paths to and from the UK to ensure connectivity and redundancy in any worst-case scenario?

“Yes, a big part of my job is planning the diversity and resilience of the links,” said Bateman. “There are two diverse international fibres managed by Globecast. The main match feeds go back over both of those and then we’ve got hitless switches that will switch between the two in the event of a failure to one of the paths.

“When we’ve got OBs here we also have satellite from the venues to give us a backup – and on top of that, we’ve got a LiveU link as well, as a final backup.

“For this tournament, IGBS has added an additional content feed, which is an EVS clip reel if you like, with the highlights of the games. That’s useful. 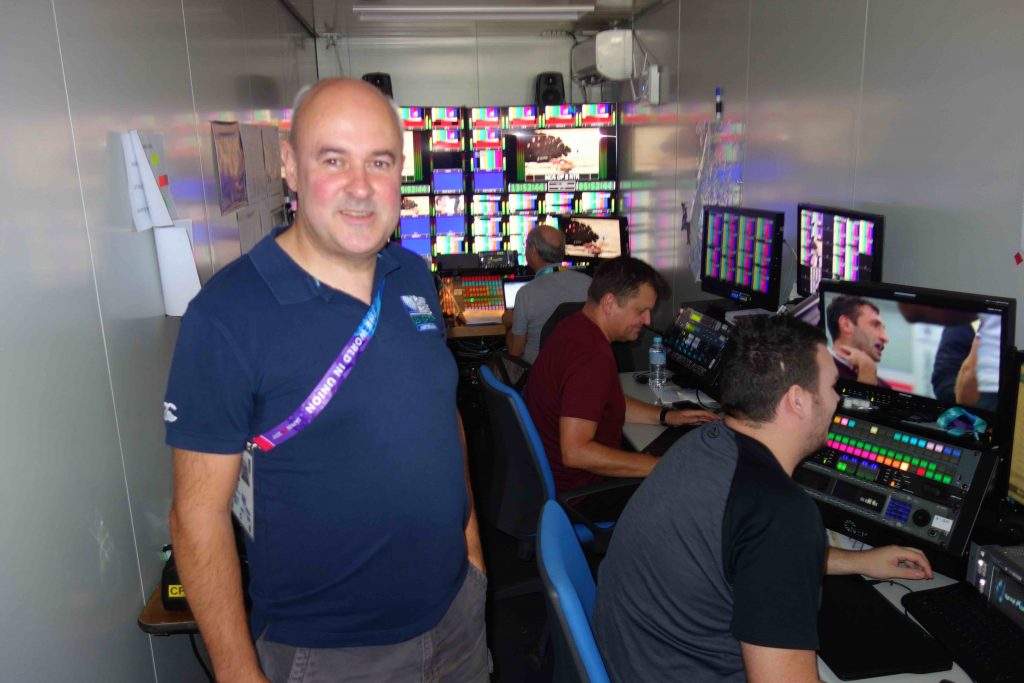 “The big difference is they also have reporting teams on the grounds, so where we can’t get a crew somewhere we’ve got the media from them that’s coming back to their media server at the IBC. So producers can browse and get a press conference or training session that we couldn’t get a camera to at one of the venues.

“For the knockout stages we have a full OB derigged in Portakabins, with a production and presentation team and kits supplied by NEP. For the first quarter-finals in Oita and Tokyo our OB was in Oita but we also have a full second presentation, camera-wise, with live remote presentation from Tokyo.”

“It is always a challenge to find a suitable pitch-view studio position for these major events. [Host broadcaster] IGBS has worked hard to understand our needs and build studios for us in Oita and Yokohama. This involved a lot of negotiation with the stadiums and LOC.

“Maidstone continues as our post-production hub, with all editing happening there. But the whole live production comes out here. That is backed up by event suites at Red Bee in Chiswick, our transmission centre.

“As a final ‘if we lose everything out here’ they could take the world feed and put that to air with our commentary. And IMG are obviously distributing the world feed in the UK. That’s the last point in the chain: our final backup,” said Bateman.