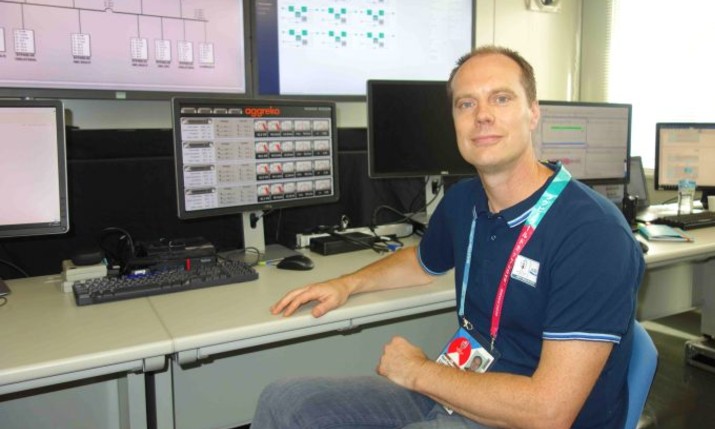 Bart Lucassen, IGBS: The network is also available on non-match days for testing, which is very beneficial.

Two pieces of the operational jigsaw for any major event host broadcast are telecommunications adaptation and the supply of uninterruptible power for the tournament.

Host broadcaster IGBS is working with Aggreko for power delivery and with Japanese telco NTT plus network adaptation specialist VIDI for monitoring, timing and synchronisation.

“We started with [Aggreko] in January doing all the designs and implementation,” explained IGBS head of telco and power Bart Lucassen. “We are centralised here with a team of four guys monitoring the venues and the IBC.

“We work with the venue technical managers on-site, who are supporting us in case of any issues locally. They are the first responsible, locally, and we are the back-up line of response.

“We have our own set-up here. The supply source is from Aggreko, and the distribution from then onwards is done by ourselves. The technical power is with diesel generators, a fully redundant system.

“The difficulty is with our cameras; the lights blink at a different rate. And all field of play lighting here has been replaced by LED lighting. We have had those issues when capturing each game.”

For domestic power, they are using the utility and they have back-up generators.

“Say for example in the case of a utility failure where we sustain an interruption from domestic power, after a minute a back-up generator will pick up the supply,” said Lucassen.

“This is a unique country in that its domestic supply is 100 volts – the only country in the world to have that. And they have 50 and 60 Hz in the east and west of Japan, so there’s a split. There’s a clear boundary in the country where it’s 50 or 60 Hz. That makes it complicated!

“The difficulty, of course, is with our cameras; the lights blink at a different rate. And all field of play lighting here has been replaced by LED lighting. We have had those issues when capturing each game.”

Flexible network helps to change the landscape for broadcasters

IGBS is using the same telco network adaptation system that was employed for the FIFA Women’s World Cup this summer. Karsten Winterburg, owner and technical director of network adaptation provider VIDI (pictured below) told SVG Europe, “we provide one flight case for each venue containing adaption equipment and an Arista switch providing PTP. Audio adaptation is PTP over 1G and the master is here at the IBC.

“We use the switcher as a boundary clock providing PTP time stamping to the Lawo equipment, so that they can synchronise to the correct timings.

“We have seven teams travelling around: there are big gaps between the matches, so the teams can go from venue to venue. We don’t have a team here in Tokyo as the venue is directly next to the IBC and directly cabled with no adaption from us.

“We have the network management system here at the IBC with a complete overview. As soon as we see a fault in the network or PTP or adaptation equipment we give some hint – it’s like a remote hand from us here. 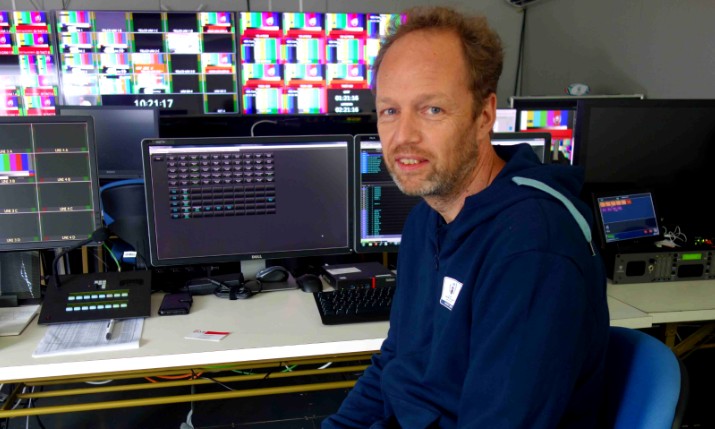 “In this set-up there are five multilateral feeds; Basic Stadium Feed (BSF), Clean Stadium Feed (CSF), Camera 1, Additional Content Feeds (ACF) which switches between live content and EVS playout, and tactical feed. In addition, we have one UHD feed, which is the same as the CSF but in UHD. And we have four unilateral feeds which we can provide to broadcasters like ITV or TVNZ.

“On top of that we have return feeds and the Gigabit Ethernet feeds. One of these is for our own communication purposes, one for HBS feeds between the venues and the IBC, and we have an ENG network where there are some injection points in the venue. Some broadcasters have ENG teams on-site and they can simply plug in their Gigabit Ethernet on-site and it can be fed to the IBC.

“The network provider provides two-times 10 Gig for us at the IBC and at the venue. What we do with the adaptation equipment is select which line is without any errors, and we do this in a hitless manner. The protection works well,” said Winterburg.

The event double star network is redundant and diverse from each venue to the IBC, with a capacity of 10 Gig per route. It is permanent for the event duration, not switched. Lucassen said, “the network is also available on non-match days for testing, which is very beneficial. For instance, there is some production taking place with ITV Sport in Yokohama on non-match days, which normally would be difficult. But we can have both models and we can facilitate it as well. It’s very flexible and it has worked very well.

“We tested in January at the NTT labs here in Tokyo with the VIDI equipment, to see if it was compatible. It worked out quite well. We had some minor issues with link-flops, but there was no impact on the broadcast. It has never happened on both routes – so there was a spurious issue there, We’ve seen very strong support from NTT; it’s a very good partnership,” he said.

“Personally, working on a lot of FIFA events, rugby is very similar – but it’s not the same! We might make a lot of assumptions, ‘ok we know this is going to take place here’, but we had to learn rugby really quickly.”

“For me, personally, working on a lot of FIFA events, rugby is very similar – but it’s not the same! We might make a lot of assumptions, ‘ok we know this is going to take place here’, but we had to learn rugby really quickly. It makes it a very interesting project for IGBS.

“The joint venture between IMG Media and HBS is good for both companies, as we have a different style of working, with different types of regular projects. So by putting those people together you learn from each other. You try to develop the best practices and get the best of both worlds. It’s a very positive cooperation,” he said.