Live from The Ryder Cup: Broadcast RF at centre of massive wireless effort

Broadcast RF is on hand at the Ryder Cup with its largest sports-related presence ever, courtesy of 28 wireless camera systems that are in use by eight clients. It’s also in the midst of a challenging RF frequency environment thanks to a nearby airport, military base, and research labs that also rely on RF. 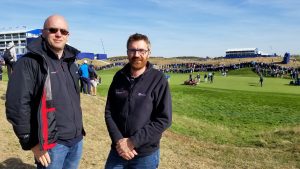 “There is a hot bed of things that are RF related so frequencies are a challenge,” said Mark Houghton, Broadcast RF, managing director. “We have worked closely with EuroMedia to help us plan the frequencies.”

The tight spectrum squeeze has resulted in Broadcast RF moving six cameras into the 3.5 GHz spectrum. James Halliday, Broadcast RF, technical project manager, said frequencies were changing up to the time the Broadcast RF team began driving its van over from the UK but the team of nine has managed just fine.

Le Golf National golf course seems like it would be pretty straight forward as there are not a lot of trees and it is wide open. But the course is designed to be a stadium course which means that many of the greens and fairways are in slight valleys. Antennas around the course are routing signals to receive sites which are then connected back to the compound where a larger RF router is in place to deal with the additional camera inputs.

“It’s more challenging than Carnoustie [was at the Open Championship] and is more like Royal Birkdale,” said Houghton. Handheld cameras are not using poles for RF transmission, but poles are used for the Top Tracer and the high-speed cameras.

Another challenge was the speed at which the team needed get the RF systems up and running as Sky Sports was on air on Monday. And the opening ceremony on Thursday was a standalone event that was handled by a separate production team.