Live from the Ryder Cup: All systems go for CTV OB 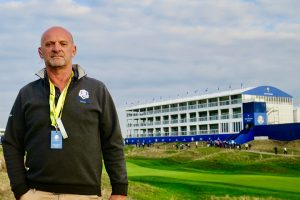 The 2018 Ryder Cup is underway at Le Golf National outside of Paris and the production effort is once again led by European Tour Productions and CTV working closely with NBC and Sky Sports who are the two primary rights holders in the US and UK. “It’s a unique competition because there are only four matches at a time for two of the three days,” says Hamish Greig, CTV Outside Broadcasts chief executive (pictured). “But you still need 150 cameras to do the event justice.”

While the competition on the course is unique the atmosphere is what really sets the Ryder Cup apart. With two teams of 12 golfers from the US and Europe squaring off the crowd tosses aside golf fan decorum as emotion and rooting interests take hold.

“The crowd interaction is completely different from any major,” says Greig. “It’s the one event where golf fans act like football fans and it is totally acceptable.”

The production and technical operations are very similar to an Open Championship as ETP handles host coverage while Sky Sports in the UK and NBC Sports in the US have a large on-site presence to deliver coverage to viewers back home. There have been a couple of modifications to NBC and Sky operations as, for example, NBC has less EVS facilities on site, there is no streaming of holes to DirecTV subscribers in the US, and Sky does not have its Sky Cart for post-match analysis.

The biggest “new toy” at the Ryder Cup this year is actually the longest as ACS has a wirecam system (camera rig supplied by Camcat) that measures 640 meters, making it the longest wirecam system ever to be used on a golf event. It also has the ability to capture shots over multiple holes: 1, 9, 15, 16, 18 and the practice range.

There have been a few challenges to get the course and compound ready for coverage. First, the compound area earlier this year was a lake due to flooding and that required sand to be brought in to fill up the lake. But the area has also experienced very few days of rain in the past couple of months and that meant that when it was time to lay in fibre cabling additional equipment was required to cut the cable troughs as the ground was as hard as concrete.

“It’s a unique competition because there are only four matches at a time for two of the three days. But you still need 150 cameras to do the event justice.”

And then there was the challenge of making sure all of the equipment that was required was on hand as much of it has been bouncing around the globe.

But there are also a number of CTV hired in OB units on hand as well as cabins. EMF’s  A3 unit handled the 13-camera production of the opening ceremony on Thursday afternoon. Telegenic’s T18 is on hand to support Sky’s main production (including the studio show and the Ryder Zone from the practice range) and TNT is calling CTV’s OB1 home for its efforts that for PGA.com as a team back in Atlanta pulls in various camera feeds.

There are 33 cabins on site, handling everything from Century Link transmission, to RF audio, NBC editing, EVS servers (10 for NBC and 8 for ETP), host signal distribution, and general office cabins. As for studios around the course, NBC has a studio on the 18th fairway along with Canal+ and The Golf Channel while Sky has a studio at the lively first tee area and the driving range. The BBC, meanwhile, has a small studio presence near the putting green across from the clubhouse.

“The crowd interaction is completely different from any major. It’s the one event where golf fans act like football fans and it is totally acceptable.”

This morning is when the compound full came to life as the European and US golfers took to the course with four groups that played fourball (this afternoon will feature four groups squaring off in the foursome format). The unique format of the Ryder Cup, with only eight players on the course at any one time until the final Sunday afternoon when all 24 players will be on the course for 12 single matches requires a different philosophy when it comes to camera placement and management.

For example, at the Open Championship in July there were 199 cameras on the course. The Ryder Cup requires 153 cameras for both on-course coverage and the opening ceremony.

The Golf Channel’s complement includes three cabled cameras plus two ACS Smarthead cameras and a Toptracer on the practice range. Sky has 10 Sony HDC-2550 cameras, three RFs (two ZX450s and an Xmo) and Turner has two Sony ZX450 RF cameras following a morning and afternoon group. All of the lenses are from Canon.

The biggest technical challenge has been juggling RF frequencies.

“The course is right next to a private airport, three military research units that are utilizing a lot of RF equipment as well as a military base,” says Greig. “Our frequency management has been ongoing for three months and it was even changing until last Wednesday. That has been the most challenging aspect of the production.”