Sky Sports is on site at the Ryder Cup and relying heavily on the world feed produced by European Tour Productions (ETP) and also calling NEP ND6 home for the week. But the production team is also making the most of Sky’s own facilities, most notably bringing its impressive studio set that was used at the Open Championship this past July across the pond and making the most of Telegenic’s T4 and T5 production trailers that have been at the centre of US golf coverage this season. 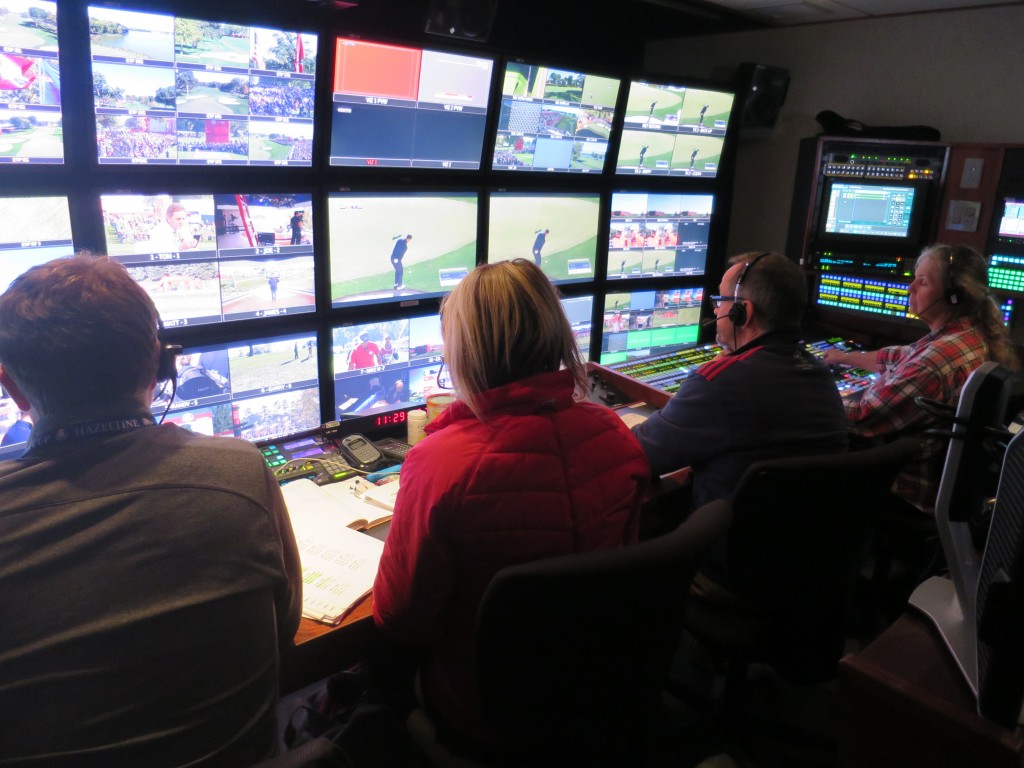 “ETP has host coverage that we can rely on,” says James Clement, Sky Sports, head of operations. Sky’s studio operations make use of three cameras plus a fourth on a Jimmy Jib and then on-course coverage includes two unilateral RF cameras as well as an iMovix HiMo RF camera and two handheld cameras that can be hooked up to cable drops at the first tee, 18th green, and other locations.

David Culmer, Sky Sports, production manager, adds that another key this year is the use of Level 3 circuits between Chaska, MN and the Sky Sports production facility back in the UK. The Level 3 circuits give the Sky Sports team 450 Mbps of outbound connectivity across the pond and the ability to send three video feeds encoded using Nimbra J2K encoders back to the UK and then feeds encoded as h.264 streams to return back to Hazeltine golf course. IP-based communication systems are also riding on the Level 3 circuits, allowing for seamless communication. Sky Sports News can even control the prompters from the UK by building 160 milliseconds of latency into the system.

“The NCAM system is also interesting,” says Culmer of the camera system that allows for Vizrt augmented reality graphics of the Ryder Cup players to be integrated into live shots out of the studio, giving the appearance that that the players magically appeared in the studio. Similar to the last Ryder Cup, the production team on location at the Ryder Cup shot video of the players and then was able to send those files, each about 4 GB in size, back to the UK via File Catalyst for final post. About 200 GBs of files were then returned to Minnesota for use by the studio production team. 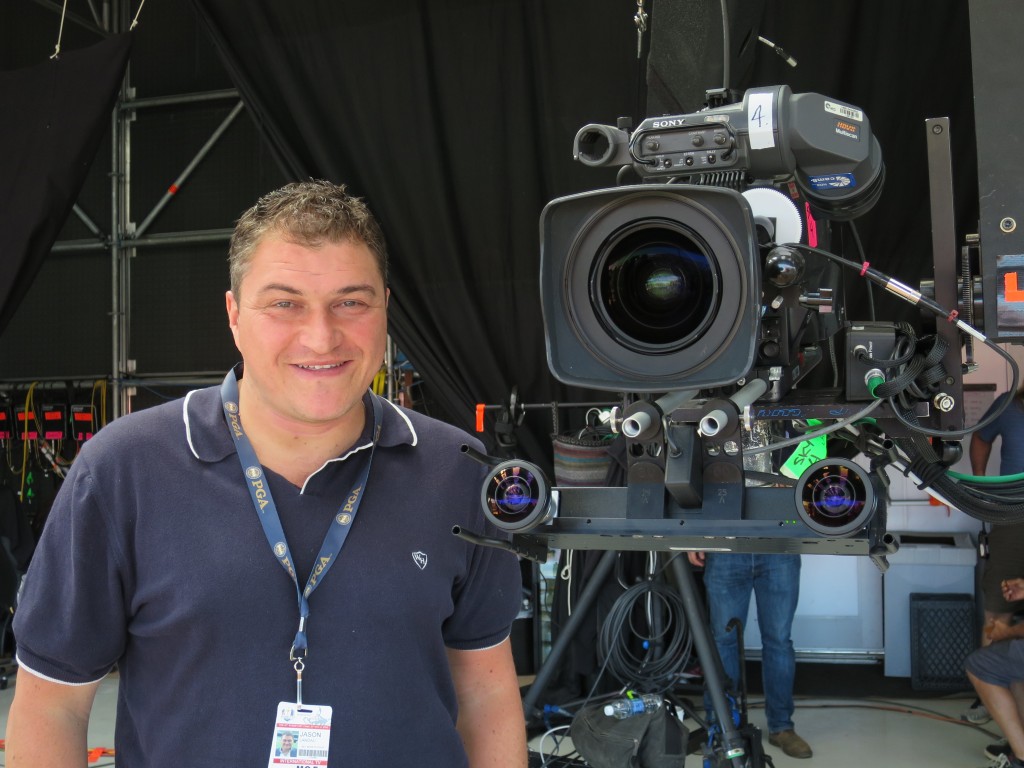 “There was a good case for buying it after it was successfully used at The Open and by owning it we give our guys the opportunity to learn more about,” says Jason Landau, Sky Sports, design director.

Earlier in the week the Sky production team had 15 minutes with each player and captain and was able to shoot video of individual players and captains taking a couple of steps forwarded and folding their arms as well as video of them stepping forward and doing something like pulling out a yardage book or putting on a golf glove.

“It brings a bit of life to our coverage so that when there is a discussion about a player their image isn’t frozen,” says Landau. “We also put in shadows this time which really helps.”

“The director for the Ryder Cup, Mike Allen, was of course involved working with the cameramen to ensure the visualization was as strong as it could be,” adds Landau.

Many of the production trailers on site at the Ryder Cup are similar in form and function. The exception? Telegenic’s T5 trailer, an expandable OB unit that Sky Sports commissioned earlier this year for use on all of Sky Sports golf coverage in the U.S. With T5 in the compound the Sky Sports production team has a mobile unit that can handle a wide variety of production functions depending on the what level of golf tournament is being produced.

“We looked at the cost of having something proper like T5 versus using trailers about 18 months ago and have now been using it for six months,” says Clement. “This allows for simpler set up and the talent can be in a nice environment for a week.” 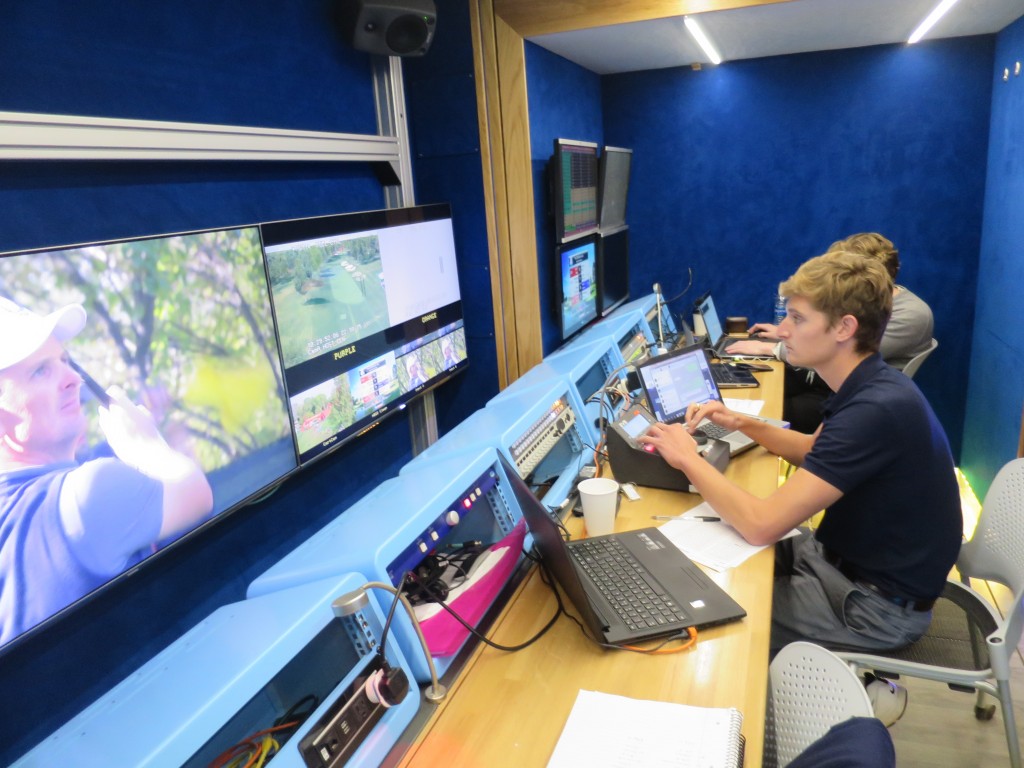 Telegenic’s T5 unit is used at the Ryder Cup for commentary, as a green room, and for Hego control of the studio touchscreen monitor.

The T5 expandable production trailer includes a commentary cabin, a large and comfortable green room area for talent, a Digico audio console, and then a small front bench area that is used to manage the Hego with Perfect Parallel for the studio touchscreen monitor used by talent for analysis. An EVS XT3 server is on hand to record clips to be used during analysis, Grass Valley Edius is on hand for editing, and a Blackmagic Videohub provides vision mixing support. The unit features equipment racks behind soundproof glass to create a quiet environment and also separate temperature control zones to create a comfortable environment.

“On the lower level golf events the director and EP can cut a two camera shoot of the touchscreen and then that feed can go back to London as a separate unilateral from the world feed and then cut into that feed,” adds Clement. “So it’s kind of like a mini remote production facility.”

At top-level events, like the Ryder Cup and U.S. major tournaments the T5 unit serves as the integration point for Hego, a top-notch green room for on-air talent as well as the commentary studio. Previously Sky Sports would rent the typical portable office trailers and basically have to start from scratch for every event.

“The T5 unit can be deployed by one person in about 20 minutes,” says Andrew Wisniewski who oversees the unit for Telegenic. “Sky wanted to create the best possible facility to combine hospitality, a good commentary area, and all of the related equipment in one unit. “You can also have different temperatures in different rooms and the rooms are very quiet when you close the doors.” 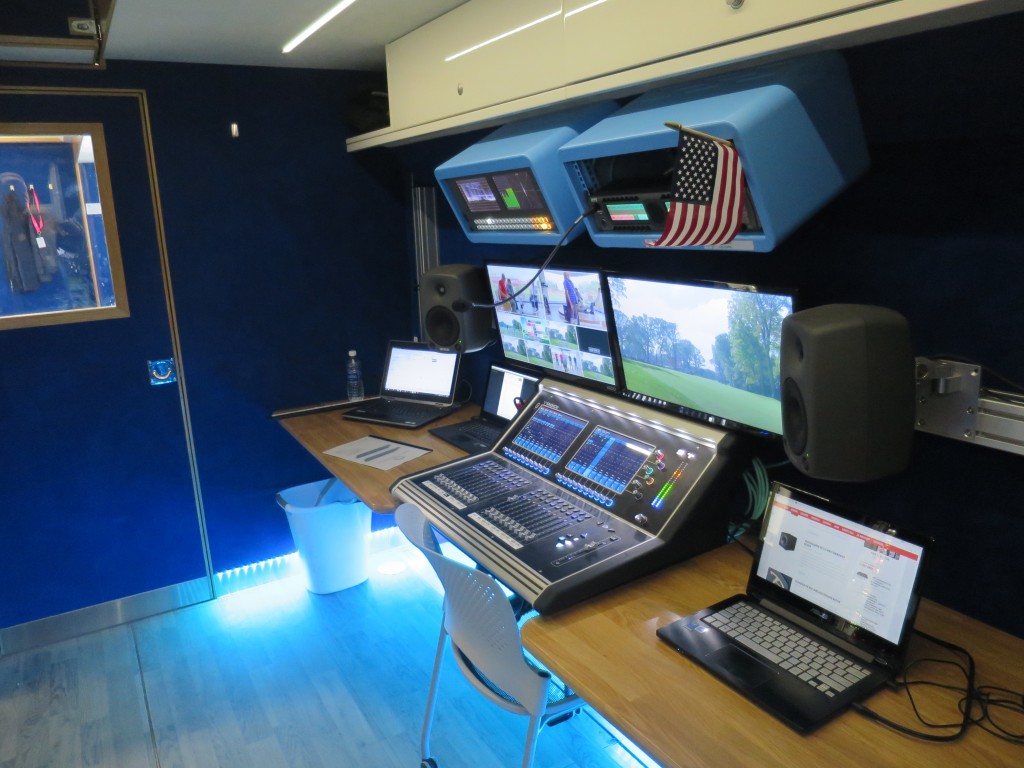 The Digico console inside the T5 trailer.

The T5 unit is complemented by T4, a non-descript green shipping container from the outside that on the inside has not only technical firepower for four Grass Valley Edius editing suites with After Effects that can access 120 TB of on-site storage of previous golf events and also quiet operation thanks again to machine racks located behind glass doors.

At the Ryder Cup the production team in T4 is working on show opens and then three edit suites for features as the nature of the Ryder Cup makes it a very feature-rich environment.

“Also certain walls can move to create different work spaces, like a meeting room,” says Wisniewski. “You can also have different temperatures in different rooms and the rooms are very quiet when you close the doors.”

Sky Sports also leveraged the on-course studio that was built for The Open Championship, held in July at Royal Troon in Scotland. 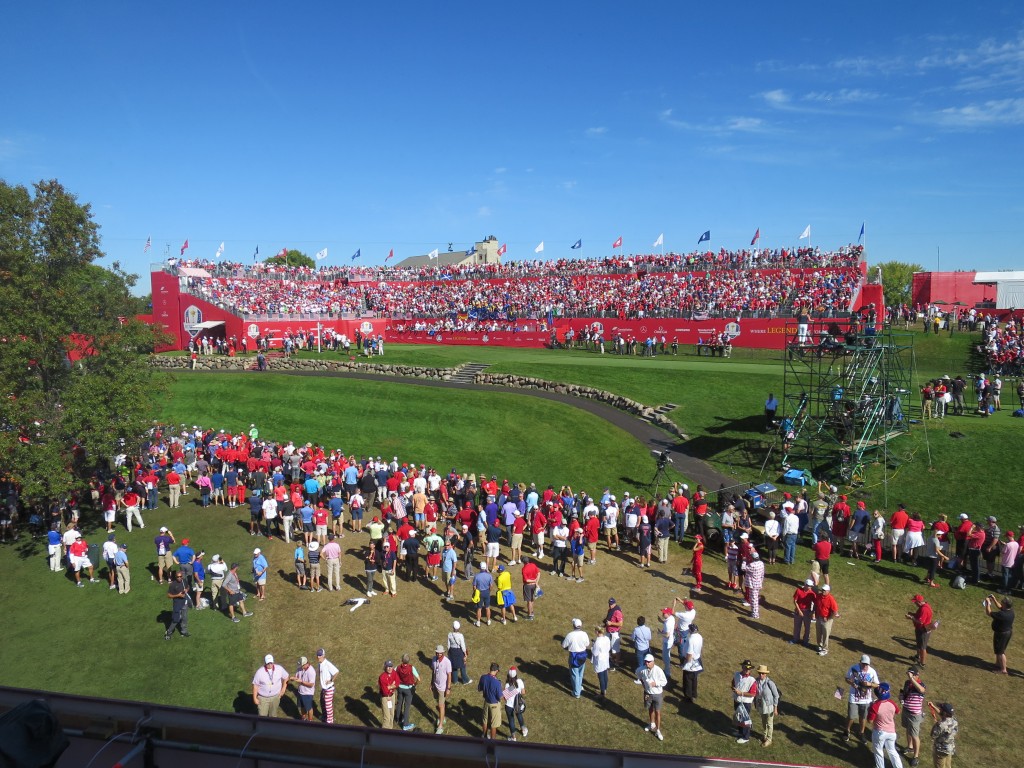 “It worked so well at the Open so it made sense to bring it here as well,” says Landau. “And we’ve gone for the vista of the first tee because the Ryder Cup is all about excitement and from our location you can hear and see the build up to the event as it happens. It’s a great place to be and a party atmosphere.”

“At the Open we found that the screen we had was fighting against the sun and, not surprisingly, it lost,” explains Landau. “So this time we have a smaller screen in place but it has up to 7,000 nits of brightness compared to 3,000 nits for the larger screen.”