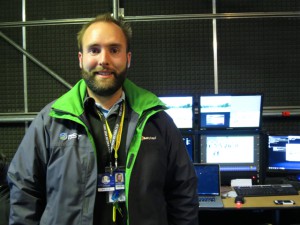 UK-based graphics provider MST Systems covers a variety of sports around the world including motor racing and rugby, but managing director Stuart Paterson told SVG Europe that this Ryder Cup in Gleneagles tops the list of events on his company’s roster. “This is the highest profile event we do. Previously it hasn’t been the biggest; but this year it is because we’re scoring everyone – NBC, Sky Sports, pga.com, Turner Sports and touchscreens.

“And then we have the full scoring system for the whole of the television compound. Everyone is using our scoring terminals and scoring data. We have 150 laptops out in the compound and in the studios around the course. For Sky we’re integrated with Viz graphics for their Pres, and we offer them a data feed for their touchscreen and everything else: they’ve got a Viz in each truck, so for all of their leaderboards and more advanced graphics they’re using our data.

“NBC, as well as using our scoring, have their own separate scoring system so they can work as they like. We’ve also integrated in order to drive their graphics channels so they can populate all of their graphics analysis. And we’ve made a product that fits in with the workflow that they’re used to in America so it’s been a seamless integration for them. They’ve turned up here and it’s like a normal event for them, which is nice!

“In Atlanta, for pga.com and Turner, what we’re providing is an online scoring system so they can view on the web all of the same enquiry terminals we’ve got here, and in their offices in Atlanta we’ve installed an application that’s connected to all the data to populate their graphics machines there, as if they were on site. They’ve got the same facility as everyone else, but they’re back at base in Atlanta. So fingers crossed they’ll be happy!”

The other key part of MST Systems’ role at the Ryder Cup is Protracer. “This is the image processing of the ball flight, so instead of just seeing that ball in the middle of the camera when you don’t know where the ball is going, you’re actually seeing how the shot went,” says Paterson.

“We have five fixed-tee Protracers. On top of each you’ve got a little tracking camera and that uses image processing that tracks the ball flight. We’ve got those on holes 4, 5, 6, 10, 13. The operator can choose the output himself, or the director Jim Storey will radio in and ask for a trace on the next group of players and so on.

“Protracer is a Swedish company,” says Paterson. “Daniel Forsgrun is the creator and he’s developed it over the last 10-15 years. We’ve built up a good relationship with him, so for all of the European Tour events we offer this service licensed by his company.”

While Paterson says this Ryder Cup is probably his highest profile golf event to date, MST Systems is constantly busy covering golf and more around the globe. “We do all of the Asian Tour graphics, the Sunshine Tour in South Africa, and we do the main Ladies events including the British Open and the Evian, and also the PGA Senior in Asia – anything outside the USA really.

“And the other part of our company is motor sports, where we do the World Touring Cars for Eurosport and domestic championships as well. And we also do some rugby – the Singapore World Club Tens and the Asian Five Nations. The design of our system will easily adapt to other sports,” he says.