Live from The Ryder Cup: Primetime show shares the drama for BBC Sport

The BBC Sport team in Paris is producing a two-hour highlights show for primetime on BBC2 as the action unfolds over the weekend.

SVG Europe caught up with BBC Sport executive producer Jonny Bramley who said “the Ryder Cup is completely different; there is nothing else like this in golf. You have to approach it differently. There’s obviously one big story – Europe versus the USA.

“It’s well documented that the Ryder Cup is more akin to a football match between two deadly rivals than it is to the usually genteel sport of golf. That very much influences our approach,” said Bramley. 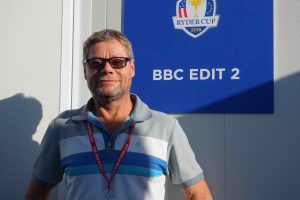 “One example: Ken Brown is not doing his popular ‘Ken on the Course’ pieces this week as that is much less relevant and more peripheral to the story of this week. The story is there on the course; we don’t need to add as much as we would at The Open. Everything here is lost in the noise of the atmosphere – it’s there in front of us.

“We don’t have our own studio here,” continued Bramley, “and it’s actually very helpful that the weather is beautiful! Our presenter Eilidh Barbour does a pre-recorded opening each day to capture the atmosphere; then a round-up of play after the morning and afternoon sessions on Friday and Saturday with former Ryder Cupper Jamie Donaldson – who sank the winning put in 2014. Jamie is also working for 5 Live out on the fairways as well.

“We have our regular commentary team of Peter Alliss, Andrew Cotter and Ken Brown. This year we’ve brought a new member onto the team to give an American perspective; Ned Michaels is a regular broadcaster and commentator with Fox and The Golf Channel. He knows the American players well and is a former Tour player.

“In theory it should be easier to tell the story as there are fewer matches out on the course,” said Bramley. “But what you also find is that there’s almost too much good material. We have to be very disciplined and we have to plan for each day: the story can change. The crucial holes could happen early on; we plan for that but we might have to drop that section as we go, as we need to hit our deadlines. We have to be flexible, but we need to be building as we go.

“We also can’t assume that people who watch our highlights have seen the golf and know the story,” he said. “We’ve got to present it to people who may not even know the result at that point. We have to ensure the story is told correctly and fully throughout the day,” he said.

“We have two cameras here,” said Bramley. “One of them will generally be working with Eilidh, recording links. We’re fully mobile, with RF coverage across the whole course for both cameras. We do have our own RF kit, but the broadcasters here have pooled together to enable an RF system that we can all use.

“In the past we’ve been basically hand-carrying interviews back; the commentators won’t have heard them and they’ll have gone straight into the edit suite. This time we’re able to run them in through the truck; commentary can hear and respond; and we can also feed them to our news and web teams back in Salford,” he said.

“And then we can actually put that material out. We have limited clip rights here for the Ryder Cup, but we can show our own player interviews. And we’re live on 5 Live; for [TV] highlights we’re a secondary broadcaster so down the pecking order a bit for interviews. But hopefully the players will still want to talk to the BBC! We’re very proud of being in primetime on Saturday and Sunday evenings.

“I think everyone here has been very pleasantly surprised. The compound here has been fantastic. Obviously the weather helps – we’re not trudging through mud! But it’s very well laid out and I think the golf course itself is very accessible in its own little self-contained area. The set-up has worked very well.

“The course is really stadium golf, and it will make for great theatre over the weekend and fantastic viewing for the spectators. It looks stunning, and the design of the course will really help heighten the atmosphere and tension over the weekend,” said Bramley.