Live from the Ryder Cup: Sky Sports leads out the European broadcast team 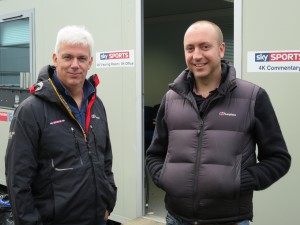 As the 2014 Ryder Cup tees off here at Gleneagles in Scotland this morning, the UK’s Sky Sports is putting its best foot forward in what’s viewed as its blue riband event. While European Tour Productions (through production services provider CTV Outside Broadcasts) is the Host Broadcaster at the Ryder Cup, Sky Sports is very much the lead European broadcaster for this unique golfing occasion.

“We’ve had a Ryder Cup channel on-air since last week; 300 hours including 36 hours of dedicated live coverage plus all the stuff we’re doing on the web and digital media around Sky Go and Now TV,” says Keith Lane, Sky Sports director of operations. “For us it’s our big event. We do go to the US Open and all the other majors. But when the Ryder Cup is in Europe, we are, if you like, the host broadcaster.

“From our point of view it’s an iconic event; we’ve got a lot of golf subscribers, but they’re not necessarily the highest numbers of subscribers we’ve got in area of Sky Sports. Soccer does incredibly well; you’ve got a nice market around F1; and there ares loads of people who love their cricket. But in actual fact the Ryder Cup brings an awful lot of those ad hoc viewers into watching Sky Sports,” he says.

“We try and give as much equal coverage as we can. Obviously being a European company we’re going to favour the Europeans to a certain degree. But I think we’re much more unbiased, if you like, and we try to make sure we follow the action. If the American team is playing well we’ll follow that as well. The sway of this event, editorially, will want you to veer down a certain route. But the nip and tuck of it means it doesn’t necessarily happen!”

Lane says a lot of lessons have been learned over the last few Ryder Cups in terms of the scale of the operation, drawing on CTV and on regular OB provider Telegenic. Sky Sports is actually doing something very similar to Medinah and Celtic Manor – although it took charge of the opening ceremony last night through an additional 19-camera production.

“For the main production we provide up to 15 additional cameras. We also take in European Tour Production feeds as well as NBC feeds, so about another 30 feeds on top. That gives us the option to follow the NBC cameras if they’re following something different to our cameras – but we would generally take the European Tour coverage.

“Golf is one of those sports you always wonder how much is live. Because of match play, you’re following groups and don’t have to worry about so many people out on the course,” says Lane.

“We obviously take the European Tour world feed, as they’ve got the most coverage on every single hole. We complement that with additional stuff. These relationships are built over the years; it’s really knowing when to dance around their feed and when you can get in and out – it’s quite a skilled thing.

“But if you look at the production team, they’ve been together a long while including the camera operators and EVS operators. You really get a rapport going with what you’re trying to achieve. We brought some US guys over as we do so much golf over there. They’re part of the team.

“This year we have separated the operation a little bit: as the Ryder Cup is so long a day every day, to make sure we can do the highlights properly we have put in a highlights truck as well. We have the main production truck; a highlights truck; and a 4K truck,” says Lane.

“We’re running a GV Edius system for highlights, and we’ve got an SGO Mistika system here as well running in the Telegenic 4K truck. And we’ve got Adobe as well, being used in the main presentation truck to do teasers into breaks. And to make those teasers slightly different they’ve been taking footage in from high res stills and blending, and then using the Edius to do all the feature pieces and rolling highlights.

“The other big thing for us is around RF cameras. We obviously take European Tour Productions RF (five from CTV) and BBC RF, but we also take our own as we’ve done before – a radio high motion so we can spin back the replays. We have four of our own RFs, which become intrinsic to our coverage.”

A walk through the studio

A key on-screen difference for Sky Sports’ Ryder Cup coverage this year involves analysis and augmented reality. “We have the touchscreen in the studio this year, and we’re also doing virtual walkthroughs with the players – so the studio is really quite large,” says Lane.

“The touchscreen is a Viz set-up this year (in previous years it’s been a Hego set up where we did all the modelling internally). We have a Vinten data head in there that works into the Viz, and the players will walk into the studio, as an augmented reality. You will see them appear in the studio – that’s something new this year. That’s taking things on from where we’ve gone with Monday Night Football and some other augmented reality.

“Hence when you see the size of the studio it looks slightly odd, because you’ve got the main presentation area and to the left of that you’ve got the touchscreen – but the depth of the studio is considerably more than you would normally have, to provide the depth of perspective for the player walkthroughs. Those walkthroughs will happen every day of the competition.

“Actually, touchscreen technology is challenging to get working consistently. No matter how well it’s working, as soon as the talent step in front of it, it just doesn’t quite behave as well as they want. We’ve put extra support effort trying to make sure we’re pushing what we’re doing but hopefully also that they get comfortable using it every day. As soon as that confidence goes – they’d rather not use it…”

Sky Sports has shot a lot of small features with drones and back cams all over the course in the last week to give the viewer a better idea of how the course sets up and adding them into the programming. With the Ryder Cup, with its unusual format (on air all day and only four matches per day for the first two days of competition), the team has much more time to feed those features in to enhance the live production.

It’s a massive team operation, celebrating a unique event where professional golfers play for a team rather than themselves and the best European and American players give everything for Team Europe and Team USA for three days every other year.

“It isn’t always about technology and the latest innovation,” says Lane. “At the end of the day it’s about telling a story, actually making sure we capture it and cover it as well as we can.

“And that goes back to the simple things we do well – cameras, replay, commentary and production ethics. If you get all those together: you can have as many bells and whistles as you like, but really all Joe Public wants you to do is capture the moment. That’s the key thing. We will introduce technology; we will do things we haven’t done before. But the key thing is to tell the story.”