Live from the Ryder Cup: Sky Sports studio bigger, better than ever

Given that the Ryder Cup in Gleneagles, Scotland, is the largest golf event of the year it’s only fitting that Sky Sports built its largest golf set ever. And it was a project that had the studio design team cracking for months and also working to create a set that not only had beautiful physical materials like LED lighting from Panalux and Martin and a touchscreen monitor but also one ready for some exciting virtual deployments as well. 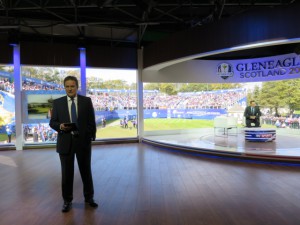 Sky Sports Presenter David Livingston has plenty of space to roam and a great view of the first tee in the channel’s Ryder Cup studio.

“The existing design team has a heritage going back to Brookline in 1991 and there is a lot of experience,” says Ceri Sampson, Sky Sports, head of design. “So we have evolved over time and for each studio we have created and borrowed from the previous one.”

Sampson says a traditional OB box studio would not have enough space as Sky Sports needed something about twice that size. The set includes a standard set where a host and guests can sit and talk as well as a touch screen powered by Vizrt. And then there are massive windows with a dramatic view of the first tee box.

“In the past we have had studios on the 18th fairway, 18th tee, and clubhouses,” says Sampson. “But we knew the excitement at the first tee gets bigger and better every year and this has lived up those expectations. We have never been as close as we are this year to the action and it is spine tingling to be on the set. So we hope some of the passion and excitement there gets back to the people at home. You can’t really get closer to the first tee unless you are a player.”

The studio for this Ryder Cup is almost more of a revolution than an evolution. Located with a dramatic view of the first tee box the massive studio takes virtual technology first deployed for Monday Night Football coverage to the next level. 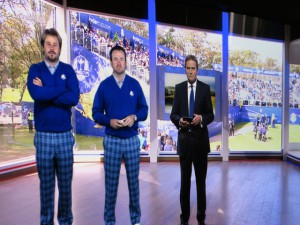 “For Monday Night Football we bring in avatars of the players so when the presentation team is talking about the defense of, say, Chelsea, the players appear virtually in the studio,” says Sampson. “So we wanted the same grandeur here and to deliver on the expectations of our customers for the way we push technology.”

The creation of virtual players that can seemingly walk into the studio and stand alongside the presenters began with shooting each of the 24 players earlier this week. A green screen studio was set up and each competitor had two videos shot: one formal and another more playful of the players taking two or three steps towards the camera. Once the video of the players was shot it was sent back to London via file transfer where the post-production team keyed the players off of the green screen using a Flame graphics engine. The finished clips were then sent back up to Sky Sports operations at Gleneagles.

“Once they are here we size them and position them using a virtual camera in Viz Scene that talks to a sensor on the camera located in the studio,” explains Sampson. “We pay very close attention to making it believable.” 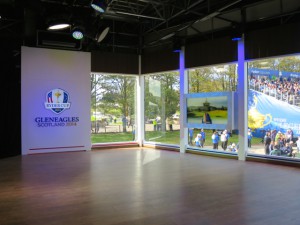 The touch screen inside the Sky Sports Ryder Cup studio.

Sampson says the key to using virtual technologies in a way that makes them believable is to only use them when they are doing something you cannot do in the real world.

“Virtual sets never look as good as the real thing,” explains Sampson. “If you can build it for real then build it.”