Live from The Ryder Cup: Sky Sports team gets out on the course to capture a unique atmosphere

Every other year the Ryder Cup affords UK live broadcaster Sky Sports the opportunity to transform the way it covers big-time golf.

The format concentrates the huge crowds at Le Golf National, with massive groups of people gathering around various greens out on the course anticipating those putting duels that are the life-blood of the Ryder Cup.

It’s a match-play event, where there are only four matches out on the course at any one time on the first two days and then just 12 singles matches on Sunday – compared to two- and three-balls going out all day from 6.30am for a major golf championships.

Of course it’s also the biggest team event in golf. Whereas the central focus of coverage on a normal major championship is individual reaction and visual analysis of individual play, at the Ryder Cup the individual doesn’t really matter – even in the Sunday singles – as it’s all about the team effort for the Americans and Europeans.

There’s not much point hearing Rory McIlroy’s analysis of his own day’s play, as he’s either got a partner alongside or else he’s contributing to the team. Equally, there’s little point waiting by the 18thgreen to get those player reactions, as most games in the Ryder Cup match-play format don’t get as far as eighteen. 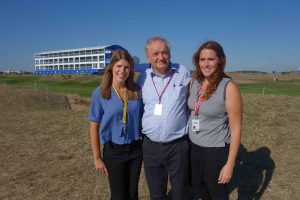 So as a live broadcaster how do you tell the story of each day, capturing the compressed intensity of the atmosphere around the course as big putts go down and the boisterous crowds roar and chant their approval? SVG Europe sat down with Sky Sports Golf production managers Dave Culmer and Katie Harrison (two of three production managers for the Ryder Cup 2018 along with Emma Chapman) to learn about their coverage plan for Le Golf National.

Dave Culmer: “Everybody wants to see that putt going in the hole, don’t they? And the players have a different approach to the crowds, TV, the press, than at a normal tournament. It is one of those events where they play to the crowd a lot more, they’re happy to engage with the crowds, compared to major championships.

Katie Harrison: “It’s completely different golf. The players are trying to get the crowd involved; normally you would never see that as they’re trying to keep the crowd quiet!

“Our main studio is based just to the left of the first tee. So as well as having the Ryder Zone out in the open, where you can see the range in the background with the crowds there – with no glass or plastic – we’ve then got the main studio on the first tee that has the background of the matches plus a six and a half thousand seater stand.

Dave Culmer: “We’ve got a fantastic view of the first tee, the stands, and the big open area around the first tee – where you have thousands of people, That fed into what Mike Allen [senior director] and Jason Wesseley [head of golf] visualised when they came out here on survey.

“It’s very, very difficult to come here when there are no stands up and visualise what it is going to be like 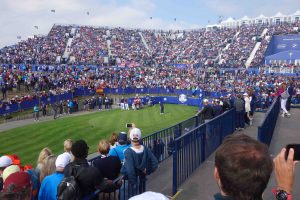 Francesco Molinari tees off at the first for the European team

when locating studios. Great credit to them for seeing it and getting the studio in the right place. That’s the skill of getting the coverage – we’re right there. People want to see that. Jason works very closely with European Tour Productions in what he wants to see and do. They produce the world feed and we augment that with our coverage and graphics.

“There’s more storytelling going out in the field as well. We have a total of six high-powered RF cameras with on-course reporters so we can follow all of the action. At The Open we had two RF cameras, and the reporters were of course in fixed positions with the SkyCart. Here, Jason will judge where the action is, and if a match is about to finish, he will send [on-course reporter] Tim Barter to the scene and we’ll get the player reaction as soon as it happens.

“We don’t have the SkyCart here, because a match could finish on any hole. And it’s about the team, not pulling an individual into the SkyCart. They’re working in pairs each day, except Sunday.”

Katie Harrison: “Whereas at The Open our main use of the Zone is to get the players in to do demos and interviews and look back at what they did before and how they’re going to do it differently at the tournament, here it’s obviously more of a team sport so we’re not using the Zone in the same way. This week we’ve had a celebrity match on Tuesday and a junior match on Wednesday, and we pulled in some of those people to talk to – in other words for other aspects of our show. 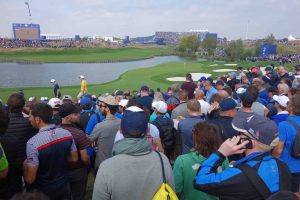 View from behind the second green, looking back across to the first fairway

“The Ryder Cup is a team game, and for the first two days so we wouldn’t be pulling in individual players. And also they have a hectic schedule on top of the golf, with team dinners and gala events, plus two matches a day – all totally different to a standard tournament where you play one game per day. There’s a lot going on. Here it’s about the atmosphere, the fun of the golf.”

Dave Culmer: “We have had some interesting challenges: for instance they wouldn’t let us put the radio masts up until Monday so we’ve had to check everything later than we would normally do at the behest of air traffic control at Orly Airport nearby. We couldn’t rig the Wirecam until Monday for the same reason.

“We’ve had to go from more fixed locations to being more flexible, in order to follow the golf – making sure we’re on the spot when something happens. Rather than rolling off tape, there’s a lot more live coverage because we’ve got the people there. We can get the reactions.”

Katie Harrison: “Here we’ve conducted player interviews on Monday, Tuesday and Wednesday, where we do the green screen shoots. We have sit-downs with them and get important information, but we also change it and do what we call ‘funnies’, in other words funny questions to draw out their personalities and it’s also a way for them to make fun of their team-mates. It’s about having them talk more as a team – who’s the joker in the locker-room, that kind of thing. That’s how it works on a Ryder Cup.”

Dave Culmer: “We use our screen up at the Zone, with experts predicting what pairings the captains will pick. The screen has the same technology as the touchscreen on the SkyCart, and that lends itself perfectly to what we do: we have the players down each side of the screen and the expert picks a player and places him in the middle and likewise with his playing partner. That doesn’t have to be prearranged: we just put the players there and the screen technology pulls it across as they’re talking.”

Katie Harrison: “We have a graphics cabin in the compound, where we have Perfect Parallel, Ncam and ChyronHego. It’s a combination: some of the creative work is going back by data pipe to Sky HQ and they’re turning around packages overnight. Some of the greenscreen packages are edited here and some are sent back to Sky and they do the work there.

“We’ve also used Toptracer for our fun challenges in the Ryder Zone, where talent like Nick Dougherty and Rich Beem hit different shots against each other as ‘Europe’ and ‘USA’.”

Dave Culmer: “Sky is getting quite proficient at remote production from various places. We book a data circuit each way and we can get pictures down it and reverses back. We can send the greenscreen information immediately back to Sky where they can process it very quickly and send the resulting processed pictures back – such as when the pairings are announced.

“It’s using Sky expertise back at base to its maximum, rather than tying up edit suites here. It is a very efficient way of working.

“At The Open we had about 180 people on-site. Here we have around 250 – but that’s partly because 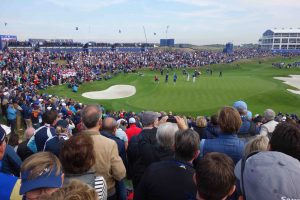 Crowds around the fourteenth green at The Ryder Cup

we’ve had to double-crew a lot more as we’re in France. But also there are two sessions per day on the Friday and Saturday, and each session is a lot more intense than on a normal golf tournament. There’s a lot going on out there, and that is tiring for the crews.

“On a normal tournament you’ve got golf on every hole – all eighteen. Here we only have four groups, so we’ve only got golf on four holes. Which means the crowds are concentrated on the holes we’re on. Getting about can be difficult! Less holes in play, and more crowds around them. Which makes for a fantastic, intense atmosphere.”

Katie Harrison: “This is one of biggest sports OBs we do. It’s not just one day; so in terms of number of hours, size of compound, people required – all of that makes it big. The Ryder Cup is really up there with the major events. It’s exciting to be part of it.”