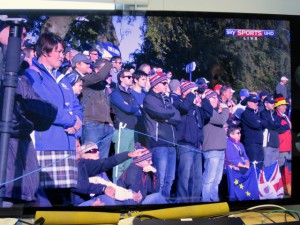 The BSkyB team has taken the opportunity of the fortuitous timing and giant scale of the Ryder Cup to put together a major trial of 4K UHD technology in a live environment across the broadcast chain. As Sky Sports director of operations Keith Lane says, “the idea was a technology trial, if you like, to bring the different manufacturers together in an open space where we’re not trying to play one against the other — rather trying to help and assist each other through the process.

“What this test challenges is sheer distances, and trying to break from SMPTE into single mode fibre and back again – and actually keeping them working as the data is so high. We’re trying to maintain integrity: fibre is supposed to be utopia but it can also be your nemesis if it doesn’t behave. So we’re pushing that,” says Lane.

“The Sony cameras have been around for a while now and have had great success. Sony and Telegenic have used them extensively already in Confederations Cup and World Cup.”

“We’ve had access to the new Hitachi SK-UHD4000 camera for a few weeks, as we’ve also shot some cricket. We’re evaluating that at the moment, as well as the new Grass Valley LDX 4K/UHD camera. We’ve got some good knowledge of how football works and we’ve got great relationships with the guys from the World Cup. We’ve got insight there.”

“But what we haven’t got is how some of the other events could lend themselves to 4K – or, could be really taxing in terms of 4K production and the encode-decode side. You look at cricket and golf, the depth of field issues, the amount of green and grass and the speed of the game. We felt this was a great opportunity, where you’ve got very long days (unlike a soccer match). We’re here for a long period of time and we can swap cameras and swap lenses.”

Both Canon and Fujinon are also involved as finding out the right mix of lenses and cameras is an important part of the process.

“We can look at the combinations that work well, and get a real feel for the new two-thirds inch lenses that are out there,” adds Lane. “What the benefits are, and the comparisons to the Sony F55 and 65. We can look at the workflow and how we can bring ENG pieces into the server.

“We’re doing a closed circuit broadcast called the Sky Experience with an 84-inch UHD TV large screen plus one in our corporate area where our CEO is hosting some people. And we’ve also got it going into the 84-inch UHD TV in Sky Studios in London. The idea there is to test the encoding: we’re testing NTT, Ateme and Ericsson. And we’re changing all the bit rates of the encoders so we can see the efficiency back at Sky.”

BSkyB chief engineer Chris Johns says: “We’re testing the bit rates from 140 Mbps all the way down to 80. We don’t know what are the best bit rates, as they’re all based on the same quad that everyone is doing at the moment. 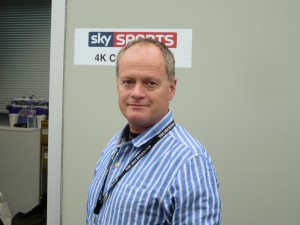 “We’ve got a great opportunity, over three days, to test as much kit as possible,” says Johns. “And we’re doing a whole lot of tests back at base as well, of which encoding is just one. We don’t know which bit rate we’re going to use tomorrow yet, as we haven’t finished testing today! We’ve never seen the action in golf before, how much motion is involved or anything like that. We’re very much feeling our way.

“My guess is each of the encoders will have a slightly different set of parameters and a different set of needs as well. It’s a real learning experience. NTT, Ateme and Ericsson – and that’s literally because we couldn’t fit any more in the truck to test.

“What you’re looking at there [on the 84-inch 4K UHD screen in the Sky Sports HD testing cabin in the TV compound] is straight from the Telegenic truck, being sent over a quad fibre and then through an AJA box to decode into HDMI. That’s raw, and then we’re playing around with some other bits and pieces as well. And we’ve two Viz for graphics, one for live and one for standby. 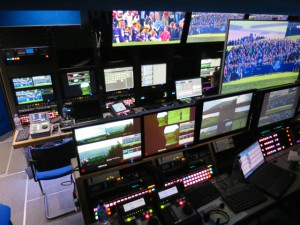 Six replay systems side by side for testing in Telegenic truck

“Quad HD is feeding the Sky Experience and the truck and then compressed down to London and feeding it through our existing infrastructure in Sky Studios. And then we’re just doing some testing locally in Sky Studios on HEVC, just to see how the latest generation of HEVC encoders work at p50 – because, obviously, until recently you only had the availability of p25. And we can let the guys back in London see what we’re doing up here as well – all the staff can see what’s happening.

“It’s a chance to test, test, test,” says Johns. “At IBC everyone was talking about the small shoots they’ve done. This is just one big event where we can test as much of the kit as possible in one place allowing direct comparisons – cameras, slomos, replays and contribution codecs. It’s a perfect opportunity.

“It’s certainly quite exciting on these bigger screens. I’m quite impressed, so far. Touch wood!”