The undoubted star of the camera coverage show in Paris is the 640-metre Wirecam covering key holes – the biggest system ever supplied by ACS for golf.

And then there’s Boatcam, version two of a remote-controlled catamaran built in-house by ACS that provides amazing eye-level shots from the lake capturing the Ryder Cup drama on the fifteenth and eighteenth greens.

The Wirecam system supplied by Aerial Camera Systems to European Tour Productions is a Camcat fitted with an HD Cineflex V14 stabilised mount. Boatcam is fitted with a Movihead 15 stablised head and Sony P1 camera and lens with Cobham Nano Link. 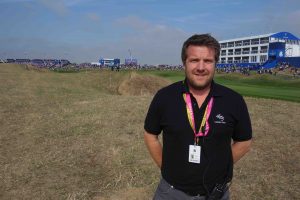 Also supplied to ETP are a Sony P1 Beautycam with weatherised housing capturing drives off the first tee; a SmartHead remote head with Sony P1 being used as a ‘Bridgecam’; five tee-box Railcams, two fitted with a SmartHead remote camera (P1) package and three with a fixed Sony P1 and w/a lens; and one POV minicam. 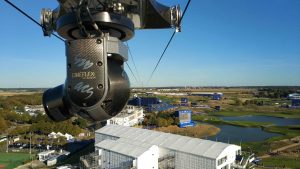 Aerial Camera Systems, with a crew of 15 at Le Golf National, is also supplying two SmartHead3 remote heads with Canon box lens adaption and Sony P1 cameras to CTV for The Golf Channel.

In the TV compound ACS Operations Director Dave Whitlock told SVG Europe that the Wirecam at Carnoustie was 100 metres and the one at Birkdale the year before that was 350 metres, going over the range and then over the spectators’ village. “That one captured the action when Jordan Spieth went off the fairway onto the range,” he said. “But this is the biggest ever on golf.

“Jim Storey and Tony Coxon from European Tour Productions had the vision, that the layout of the course lent itself to a straight line camera, which could see everything from the sixteenth green, fifteenth green, eighteenth green, to the first tee and then a bit of the range as well. I’ve not seen another golf course where you could put a camera on a line and cover all of that.

“We’ve worked with Camcat, the Austrian company that supplies the system. They’re our partner; they’re the experts in terms of the rigging ropes. We supply the camera and Broadcast RF do the links. I do all the management and set-up for that kit.

“That involved, for me, four or five site surveys over the last fifteen months. That was tricky, as every time I came back the course infrastructure had changed and now something else was in the way! We had to come up with a plan to get the ropes over all of that infrastructure.”

The Wirecam was rigged in the middle of the night on Sunday night – delayed by a day because of air traffic control restrictions from nearly Orly airport.

“We aimed to do the rope-pull on Saturday night, but weren’t allowed to put the cranes up until 10pm on Sunday night, because that’s the time the airport shuts. That put us back a day – but actually Sunday was good as it was dead quiet on-site, with no-one else around.

“We looked at various different tower set-ups and decided on these cranes, which are working really well. The operator Dave Manton is in a cabin at the bottom of one of the cranes. He can see what Jim Storey is focusing on.

“Previously for The Open the Wirecam has been used primarily for practice. At The Open there are people on the range pretty much all day. There’s a bit more freedom here to put it in a place where you can see a lot more action.

“This system is used back home for horse racing; we have it at Aintree and at Royal Ascot. Aintree is actually longer, at about 800 metres. We could actually have gone longer here, but the longer you go the taller the supports have to be.”

ACS has supplied five Railcams for the Ryder Cup but no Bunkercams, as Le Golf National is not a links course so the players are not faced with the challenge of getting out of massive pot bunkers with high faces.

“We’ve got a beauty camera, and a camera on the bridge to see the players walk over. And then the 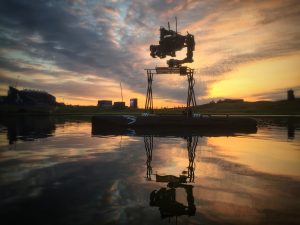 BoatCam is another feature here. This one is brand new, developed in-house over the last few months. It’s version two and it’s a bit faster.

“We’re in the main lake. It’s remote controlled – a catamaran with two hulls, and a propeller on each hull, so you steer it like a tank. One of our guys steers it and another one operates the camera with a stabilised head,” he said.

“That sits between fifteen and eighteen. The boat is faster and the camera is higher than our version one. It’s one of those nice developments, an interesting value-added thing for us.

“For The Open you’d be adding another ten cameras for the bunkers. That’s the difference; otherwise it’s a very similar set-up here,” said Whitlock.