Live from the top of a mountain: Mediahaus prepares for the inaugural European Snow Volleyball Championships 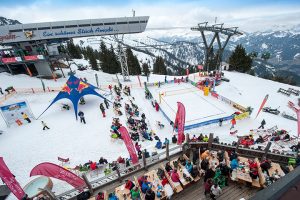 “The first idea was to fly an OB van up the mountain using a helicopter. But it was too heavy. We had no chance. We couldn’t get insurance anyway. And we couldn’t get the van up the streets either. So, we had to use the cable car…”

Angermüller’s company is responsible for all the live feeds from the tournament in Austria which is being played under the auspices of the European Volleyball Confederation (CEV) and in conjunction with the FIVB (Federation Internationale de Volleyball).

Importantly, it is also being played on the top of a mountain. But more of that later.

Unlike the well-known beach version of the sport, snow volleyball is a relatively unknown quantity, certainly outside of Northern Europe.

First played in an unofficial capacity in 2009, it has grown to become a fully-fledged and approved FIVB sport with a full European tour that culminates in Wagrain-Kleinarl and Flachau this weekend.

OK, it might not be Premier League football or the NFL but this is definitely a sport with an audience. This year alone 17 national federations in Europe hosted their own national championships. 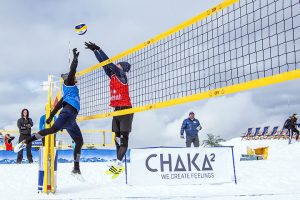 FIVB President Ary Graça describes it as a “fun” discipline that demonstrates the “passion and universality of the sport of volleyball”.

For Mediahaus, working in sub-zero temperatures, at the top of a mountain, ‘fun’ might be a strong word. But certainly the ‘funky’ nature of snow volleyball – with its court-side DJs and hot tubs and incredible vistas – has captured the imagination of broadcasters.

Sunday’s matches will be live on Austria’s ORF Sport+ with the finals also broadcast on Eurosport 2 and repeated on Monday morning.

This gives the event the possibility of reaching 80 million households across 52 countries in 20 different languages. The finals will also be broadcast on Eurosport in Asia Pacific.

In addition, live streams of the matches on centre court will be available from Friday to Sunday on the CEV’s YouTube channel and the Facebook Snow Volleyball page.

Mediahaus, working for the Salzberg-based media agency Chaka2, has put together a Blackmagic Design-based set-up to produce the various feeds.

The 10-strong production team will make use of the new URSA Broadcast camera as part of a four-camera shoot that will also include the URSA Mini 4K. A main camera will capture the action on the centre court with another grabbing beauty shots and one available for close-ups. A wireless camera will be added for Saturday and Sunday to do live interviews. All cameras will be paired with Blackmagic Camera Fibre Converters.

The camera set-up will be backed up by a Blackmagic live PPU (Portable Production Unit) that includes an ATEM Television Studio HD Pro vision mixer and an ATEM Talkback Converter. A NewTek 3Play will be used to provide instant replays and to produce highlights packages. 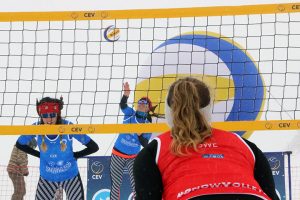 The finals will be broadcast on Eurosport 2 on Sunday evening

“There is no chance of getting an OB van up the mountain,” Angermüller told SVG Europe on the eve of the Championships. “There is no chance of getting an SNG truck up there either. We only have the cable car. To get all the stuff we need for production and transmission we put it all together in flight cases and brought it up via cable car. We built up the gallery and the satellite uplink in a little hut on the top of the mountain.

“This was a very big challenge,” he continues. “We had to take the gear out of our OB van, put it into cases and come up with a completely new cabling set-up.”

Putting a flyaway gallery in a mountain hut might sound quaint, but it’s taken three months of planning and no little ingenuity.

“The first idea was to fly an OB van up the mountain using a helicopter! But it was just 200 kilos too heavy. We had no chance. There was no possibility of getting insurance anyway. And we couldn’t get it up the streets either because of the snow.”

As there is no internet connection up the mountain either, Mediahaus has put in two satellite uplinks: one for the broadcast and streaming feeds and another for connectivity for the assembled press. Both will use the Astra satellite.

Editorially, the action will be covered much like an ordinary volleyball tournament but there will be more to the output than the spikes and digs, suggests Angermüller.

“The graphics style is like standard volleyball,” he explains. “But the rest will be different as we’re trying to get the audience more involved. Between sets, we’ll do interviews with the crowd and the competitors. It won’t be closed off like it is in football, where no one wants to give interviews. It’ll be quite funky.”

Among the commentary team will be Julius Brink, a beach volleyball player from Germany who won the gold medal in the men’s team competition at the 2006 European Beach Volleyball Championships.

With a young audience in mind, there will be plenty of emphasis on the social media and streaming side too. Facebook Live, Instagram and YouTube will all be used.

For viewers that are less familiar with the sport, VTs will be shown throughout the weekend explaining how snow volleyball works and how the points are scored. But aficionados will pick it up quickly, says Angermüller. “If they know beach volleyball, they will know snow volleyball.”

The FIVB and CEV are clearly keen on developing snow volleyball as a sport.

During the PyeongChang 2018 Olympic Winter Games, the two organisations worked together to host the ‘Snow Volleyball Night’ at Austria House. The showcase was considered a success and the long-term aim is to get snow volleyball into the Winter Olympics. There is also talk of a Snow Volleyball World Championships.

It may be that Mediahaus – and other producers – will be heading up to the top of mountains, bringing their kit via cable car, for some time to come.

The European Snow Volleyball Championships takes place 23 to 25 March 2018 in Austria. Coverage will be shown on ORF Sport+, Eurosport and online.