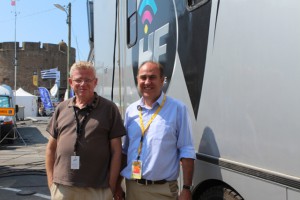 The 100th Tour de France is near the midway point and, to date, it has been a sunny and dry affair for production partners France Télévisions, Euro Media France, and Globecast. It has also seen the introduction of new wireless technology developed by Euro Media in the company’s continuing efforts to improve the picture quality and transmission reliability from the world’s most demanding RF-based broadcast event.

France Télévisions is providing the OB vehicles while Euro Media France provides the ever-important RF and terrestrial-based equipment that gets camera and audio signals from the motorbikes riding in the race to the compound. And Globecast provides satellite services to help get those signals back to the production compound when distances are too long for terrestrial-based systems.

On 9 July, SVG Europe had a chance to go behind the scenes at the 10th stage of the race in Saint-Malo, located along the coast of Brittany.

Euro Media France this year has once again improved the quality of its proprietary RF transmitters, called HDRunner III with the help of a new h.264 chip-set that can transport 1080p/60 signals in 4:2:2 as well as four audio channels with latency as low as 33 milliseconds. 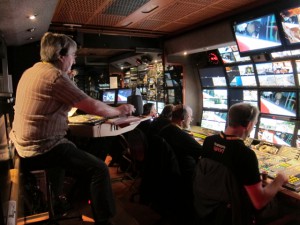 “It’s not software, we developed our own encoder chip set that is small and fits into the transmitter,” says Luc Geoffrey, Euro Media Group, CTO. “And it offers us better picture quality for the same bandwidth or we can reduce the bandwidth and have the same picture quality. The latency is also reduced as we are able to save between 500 and 700 milliseconds and still have the same robustness.”

That reduced delay is important because now the system can be used for additional needs like interviews that occur closer to the compound at the end of each stage.

“It’s very special equipment that is designed for this kind of race,” adds Geoffrey. “And we were able to improve the robustness by adding time interleaving technology.”

The interleaving is part of a proprietary DPRO modulation scheme that uses forward-error correction to handle burst and other errors. With line of sight, the transmitters can send 3Gbps signals more than 10 kilometers. 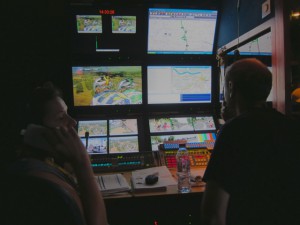 Bruno Gallais, Euro Media Group, International Business Development, Wireless Production Facilities, says that the work began during last year’s race and that the goal is to have the receivers also upgraded to the new chipset by next year’s Tour de France. The receivers, which went to h.264 last year, are still compatible but do not have the full range of benefits found in the new chip set.

The production continues to be one of those herculean efforts that involves a tremendous amount of day-in and day-out work as each stage requires the production teams for the host and unilateral feeds at the start line and finish line to continually set up, strike, and set up. The circus moves so quickly and efficiently that those who work on the beginning of each stage may never meet those who work at the end of the stage as they leap frog around the country and are typically kilometers apart at all times.

Planning the movement of not only the core production units from the above-mentioned entities but also the dozens of vehicles from channels around the globe requires months of planning to make sure that the compound set-up can happen quickly, as the TV trucks are all in place by 0500 for each stage and then broken down that evening. And each parking situation is unique, ranging from traditional parking lots in tourist towns (like the stage in Saint-Malo) to small alpine villages where the vehicles need to park single file along a road. 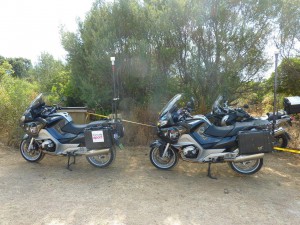 Those are important not only for coverage of the race but also the landmarks and scenic shots of France that define the coverage. Each is identified ahead of time and placed into the production plan so that the director, pilots, and commentators know when scenic images will be broadcast. Nothing is left to chance as the director, Jean-Maurice Ooghe, pilots, and camera people all have playbooks featuring pictures of the landmarks so that no one misses a step.

During each stage the Euro Media France OB unit is located at the compound at the end of the stage and receives all of the camera and audio signals from the mix of motorbikes, helicopters, and the relay plane. In that unit a small team monitors the locations of the bikes, helicopters, and plane via GPS, and also synchronises and quality controls the incoming live signals. Those signals are then made available to Ooghe who is located in the France Télévisions production units alongside the rest of the production crew.

This year’s race got off to a very different start as the first three stages of the race were all held on the island of Corsica, requiring all of the production vehicles, personnel, and support equipment to be on a boat that made the three-hour voyage to Corsica. And while most TV productions the scale of a Tour de France (Euro Media France alone has 85 people working on the race) can allow for some leeway as to when crew arrive on site, that was not the case with the first three stages. 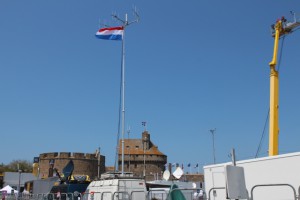 “Everybody had to be at the boat at 10 p.m. for the trip to Corsica, and then the roads are not easy to cross in Corsica,” says Gallais.

Each stage has five motorbikes getting action from the course and two helicopters getting video images from above the course. One helicopter focuses on the race action while the second captures the unique shots of the French countryside, villages, mountains, lakes, and landmarks that make the race broadcast as much of a video travel postcard as it is an actual sport event.

To get those signals back to the broadcast compound there are two or three receive points on the course, depending on the type of terrain covered. The first one or two receive points send the signals via Globecast’s satellite services while the final stage is RF based in order to lessen the latency.

“We work very closely with Globecast to make a complete link from the bikes to the compound,” adds Geoffrey. 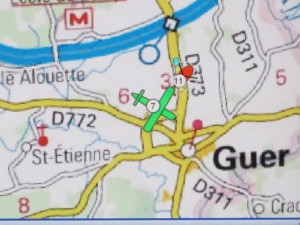 The plane icon shows the relation of the plane to the bikes below.

Geoffrey says the intermediate point has to be chosen very precisely. The race route is usually announced during the last week of October and the team immediately begins researching the appropriate intermediate points. For some stages, like those in the Alps or Pyrenees, time is of the essence as snowfall in November or December can mean the team has to wait until May or even early June for roads to become passable.

The Tour de France is once again off to a beautiful location today as the time trial stage ends at Mont St-Michel, one of the most iconic places in all of France. Look for further updates on the Tour de France coverage across Europe in the weeks ahead.