FOX Sports coverage of the 2019 U.S. Open Championship, being held at Pebble Beach Golf Links this weekend, offered up some new technology and will continue to roll out new things as the tournament progresses. Zac Fields, Fox Sports, SVP graphic technology and innovation, says the network is planning its most comprehensive and technologically advanced coverage year. 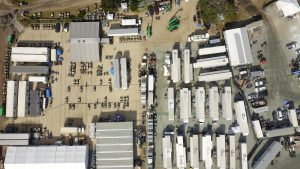 Aerial view of the TV compound at Pebble Beach

“We’re constantly improving the viewing experience of this great event and the FOX Sports team is excited to offer viewers more dynamic experiences from the golf course than ever before,” he says.

SVG will be location through the weekend to interview Fox production executives and others about some of the developments but here is a quick overview.

As always, the U.S. Open is a massive effort and more than 450 technicians, and 72 support staff will put in more than 66,000 hours of work over slightly more than two weeks of set up and actual coverage. Getting the course ready for action required 51 miles of multi-strand fibre 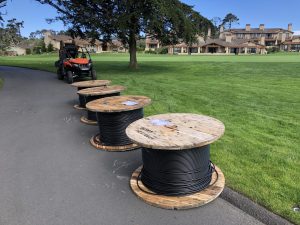 optic cable to be laid down (912 strands are available across the course) and an IP network is also in place with 1,056 1 Gbps Ethernet ports across 28 managed network locations with 94 distinct networks.

The production itself will rely on 121 total cameras, 15 more than last year. Pebble Beach is no stranger to big-time TV productions but there will be a first this weekend at Pebble Beach: a live drone camera. The original production plan called for the drone to be tethered to a boat located just off the coastline but one thing got in the way of that plan: kelp. As a result the drone has been freed of the tether and will be able to capture more dynamic shots.

Super slo-mo needs will be met by five Inertia Unlimited Xmo cameras shooting at more than 4,000 frames per second (fps) as well as two Sony cameras shooting at 480 fps. Four Cinema-style cameras will be used to capture action with a cinematic look and two mini portable robotic cameras and a 75-foot Strada camera crane will also be used. Every camera across the course will be captured simultaneously with 178 record channels and 54 playout channels.

The video side will be complemented by an audio production that will require 232 microphones, including 8 RF announcer mics, 18 hole mics, and 20 RF walking microphones. Those audio signals will be mixed on 12 audio consoles in the compound.

Eye on the ball

Fox Sports will once again fully embrace shot tracking technologies. First, the tee box on all 18 holes will be outfitted with Trackman radar technology and nine holes are equipped to show viewers a standard ball-trace over live video, with enhanced club and ball data. The remaining nine holes will display FOX FlightTrack, a live trace over a graphic representation of the golf hole, offering more perspective to the viewer. All 18 holes will have the ability to insert a real-time live carry distance

New this year? A mobile tower camera equipped with Toptracer technology, also positioned on No. 14, allowing for more dynamics within the shot. Unlike most tracer shots, where the camera must remain still, this camera will allow FOX Sports to pan, tilt and zoom to see the ball as it comes towards the camera.

Also look for a new penalty area camera system to be put to use on holes four and five. Each system has three cameras that provide more than 210 degrees of capture alongside the out of bound markers.

Toptracer technology will also be put to use at the driving range. A new ‘USGA Practice Tee’ channel will debut with a focus on the driving range and the use of Toptracer will provide additional insights into what kind of shots players are practicing. Fans at Pebble Beach will see players’ shots being traced on LED boards at the range, while the broadcast and all streaming channels will be able to go into greater detail on swing technique, ball flight and more. Streaming feeds are available on FOXSports.com, the FOX Sports App, DirecTV and USGA.org.

In addition to the new ‘USGA Practice Tee’ channel, the ‘Featured Holes’ channel gets an upgrade for 2019. Data from Trackman units on these holes will be displayed on the streaming feeds in real-time. Viewers will see data for live shots along with more advanced statistics throughout the championship.