Helping to tell the dramatic story of Gary Woodland’s US Open win at the weekend was a drone patrolling the Pebble Beach Golf Links coastline, along with shots from four robotic hard cameras that were able to capture the action from new angles.

“There are few courses as good as this one to use drone technology,” said Mike Davies, SVP, technical and field operations, Fox Sports. “There are so many active holes along the coastline, and director Steve Beim has done a great job directing the drones and doing some cool things. Drone technology has come of age here at the US Open.” 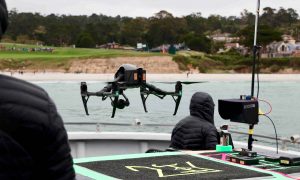 The original plan, according to Brad Cheney, VP, field operations and engineering, Fox Sports, was for the drone to be tethered to a boat just off the coast, allowing longer flying times and obviating battery changes. But the changing tides and the kelp bed’s interference with the line during low tide made clear early on that the best bet was to fly untethered.

“It does mean we need to plan a lot more about where and when we want to fly because we only have 10 minutes to get out and back,” said Cheney. “But the shots it is getting are surpassing everyone’s expectations as it allows viewers to see the course from an angle they have never seen before.”

The drone is another example of the collaboration between the technical and production teams. Executive producer Mark Loomis and Beim had studied some of the pretaped beauty shots, which were captured using a drone, and selected the shots they wanted to also offer live.

“What Steve Beim and Mark Loomis are pulling off is great. Every day, the drone shots get better and better,” said Cheney. “I can’t wait to see what it looks like on Sunday.”

It also has proved to be a necessity because the marine layer of cloud cover has impacted the ability of the blimp to fly over the course. The aerial shots from the drone, though much lower than the blimp, filled in the aerial void.

“Without the drone on Thursday,” said Cheney, “we would have had nothing.”

Although the US Open is the one weekend when Fox Sports truly leverages golf innovations, Davies is quick to point out that, when a technology can be applied successfully to golf, it can often be applied to other sports the network covers.

“The US Open does function as a bit of a laboratory for things that we can use elsewhere,” he noted. “The flight track with slabs lends itself for a sport as far afield as bowling. So we had a totally different concept for bowling coverage born out of what we did for golf. It gives a videogame feel, and I think that, on Fox and maybe everywhere else, that is going to be more important as our audiences are now accustomed to looking at simultaneous things.”

Another innovation was the use of robotic hard cameras on the course. The team stole the idea from Fox MLB productions, which place a low home camera on a robotic head. It allows hard cameras to become less obtrusive, with the camera operator panning, tilting, and zooming from a location hundreds, if not thousands, of feet away.

“Here, we are putting it on a tower and doing the same thing as we have a very small setup that fits in nicely,” said Cheney. “It worked so well in testing on Holes 7 and 17 that the USGA put it in on Holes 9 and 18.”

For example, one of the cameras was located between the 17th green and the 18th tee box, providing an angle not only on putts and tee shots but on players walking from the green to the tee.

Those four cameras from Fletcher were under the control of two operators located in the Technology Tent and using pan bars to control them.

“I don’t think there is anybody who is better at robos than Fletcher, and Brian LaValle and the team at Fletcher have been supporting us with great expertise,” said Cheney. “The funny thing about the hard robotic cameras is that, at first, the camera guys got a lot of flak from everyone else. But when it hits 100 degrees outside all of a sudden, everyone else wants to give it a try because they’re in an air-conditioned tent; they also can’t get rained on.”