Live from the US Open: Fox Sports, Inertia Unlimited shoot at 62,000 fps 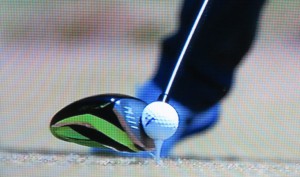 Playing back a tee shot at 62,000 frames makes the ball look like a water balloon as it is compressed and changes shape

Coverage of the US Open for Fox Sports employed a camera from Inertia Unlimited that captured the ball being blasted off of a tee at 62,000 frames per second and, more importantly, had an automated workflow that made the clip immediately available for airing. Jeff Silverman, Inertia Unlimited, president, said the Vision Research V2511 camera could shoot at an even higher frame rate but that more frames means compromised resolution. “We could go to a million frames if we wanted to but we want to have near HD resolution,” he said. To acquire full 720p HD images the frame rate would max out at 28,500 frames per second.

“The decision is finding the rate where the benefit from extra frames outweighs the loss in resolution,” he explained.

The secret sauce at the US Open is that the sound of the club striking the ball automatically triggers the camera to create the clip. “That was a critical factor as if a human operator triggering the camera was off by a second the replay would be 17 minutes in length and even if they were only off by 1/10th of a second you would wait a minute-and-a-half to see the replay. So we wanted the replay to be about 1/10th of a second so there was no extra frames at the beginning or end and the production team would have it at their disposal instantly.”

Accomplishing that involved the use of Sennheiser M66 microphone whose voltage is amplified to the point where a relay is triggered.

The conditions at the course were also ideal for the system, with ample sunshine. Attempting to shoot, say, a baseball game at night would be difficult and Silverman says that 3,000 frame per second is great for baseball.