Live from the US Open: Gearhouse Broadcast ready to fully embrace IP for 2020

When ESPN extended its US Open contract with Gearhouse Broadcast through 2025 it gave new energy to future plans concerning the move to an all-IP infrastructure. That move, expected to be completed in time for next year, will give ESPN, the USTA, and nearly everyone else who delivers video and audio content around the grounds and around the world new flexibility.

The biggest advances this year technically have been centred around ACES, the automated production area that handles the outer courts. The nine teams that handled those courts were moved to a new second floor that was added the addition of voice over booths as well as a second audio room and increased media management capabilities that gave a lot more feeds to those teams.

“External beauty cameras were added as well as Hawkeye line calling as ESPN was very conscious that the high-percentage of their output that is produced from the outer courts has production values that are as high as possible,” said Ed Tischler, Gearhouse Broadcast, managing director. 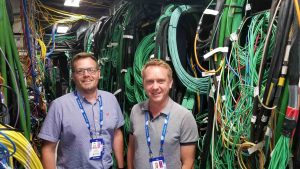 Sony HDC-4300 cameras, Sony P43 cameras, and Panasonic AW-UE70 PTZ cameras have been deployed in both. Tischler says that the other big change this year was the move to Grass Valley Maverick and Kahuna production switchers, laying the groundwork for a technical plant that can meet the unique needs of ESPN’s domestic broadcast, the world feed team, and the unilateral rights holders that are on site.

“Those switchers will help with the move to an IP world where multiple program cuts can be done without having to commit to a single format because FormatFusion can do multiple outputs and formats,” said Tischler. “Everyone can choose what they want to do as the facility will be format agnostic and forward looking.”

The two-step process being taken with respect to the move to IP is paying off. Tischler says it gives the team a chance to make the move without rushing it.

“By phasing it in we will have a smoother transition,” he said. “It allows us to get to a level of detail and we can also be much more thorough in the implementation.”

The move to IP is being done in two steps with the vast majority of changes taking place next year. When the move to IP is completed the biggest change, at least physically, will be in the Central Apparatus Room (CAR) where all of the core hardware resides. Located below an upper level that features seven audio rooms and nine production-control rooms, the CAR next year promises to have noticeably less cabling as well as a smaller footprint. There are currently two routers needed to meet all of the needs, but the plan is to streamline the routing and cabling.

“Luckily we have a very highly skilled engineering workforce and we do a lot of building and testing before we bring the equipment on site,” said Tischler of the challenge of transitioning from SDI to IP and its impact on the team. “Our engineers have been exposed to IP technology and grasped it quickly. Also, the IP hardware is a lot more accessible and they are starting to get quite a lot of hours working in IP on other events. So, we feel confident about it.”

It’s a multi-client universe for Gearhouse at the US Open as they also provide the technical backbone for Wowow, Eurosport, and Prime which is streaming the US Open in the UK. And all of them will benefit from the IP transition.

“It will be a very powerful system that will give them everything they want,” said Tischler. “It will be very exciting.”