Live From the US Open: In Year 3 of ESPN rights deal, innovation takes centre stage

In the first two years as host broadcaster and sole domestic-rights holder of the US Open, ESPN created a well-oiled machine for its colossal production operation at the USTA Billie Jean King National Tennis Center (NTC). In Year 3 of the 11-year rights deal, with a highly efficient model in full swing, ESPN continues to add to its sizeable list of responsibilities onsite while also looking to innovate with Front Row Cam, Silvus Mesh Network, Alteros 6.5-GHz wireless mic system, Simply Live ViBox all-in-one production system, and other new technologies.

“Every year is always fresh, but, certainly, being in Year 3 helps tremendously,” says Terry Brady, director of remote operations, ESPN. “I would say, to some extent, [we’ve gotten into a groove], which has allowed us the opportunity to look at some unique technology this year. At the USTA’s request, we’ve also taken on the responsibility of distribution to unilateral broadcasters, which was formerly not handled by ESPN. Every year, we add a little something.” 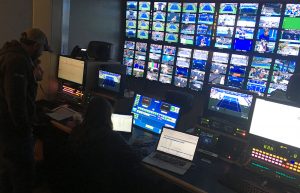 This year, ESPN is producing a whopping 3,000 hours of coverage for its networks, covering seven linear-TV courts with traditional manned cameras and audio out of nine control rooms in its 17,000-sq.-ft. Broadcast Center at the NTC (plus NEP’s NCP8 mobile unit for the ESPN ITV/DirecTV Mosaic production). Five other courts are being covered by the automated Sony Hawk-Eye SMART system, bringing total TV courts to a dozen.

In all, ESPN is deploying approximately 9,000 pieces of equipment (weighing 32,000 kg) and more than 100 broadcast cameras (plus 28 cameras for Intel freeD 360-degree replay) to support the host feed, ESPN domestic and ESPN International operations, and unilateral-content distribution onsite. ESPN is also managing 29 outbound paths and six inbound for its clients.

To support the USTA’s rightsholders onsite, ESPN enlisted Gearhouse Broadcast (which also integrated the NTC Broadcast Center) to create a single core infrastructure, dubbed the Unilateral Distribution Center (UDC). The TOC-style operation takes in 140 feeds from ESPN, distributing them to unilateral broadcasters and to the USTA’s US Open world feed. In addition to Gearhouse, NEP is assisting the USTA with the organisation and distribution of feeds.

“This is a major step up in terms of organisation at this event from last year, which is a positive,” says Brady. “We have been a host-feed provider for a couple years, but we’ve taken another step now, and we’ve taken another intermediary entity out of the mix so it makes it a little more streamlined for the USTA.”

ESPN’s massive camera complement at the NTC features an exciting newcomer: the telescope-like Front Row Cam, which debuted this year on ESPN Sunday Night Baseball. The system is being used in various court-level positions at the Grandstand, including on the back wall and along the railing next to the line judge.

“We are trying the Front Row Cam in different locations to see how it applies to tennis in getting closer to the action on the court,” says Brady. “It gives us not only a high-speed [camera] but also an alternative coverage angle that we’ve never had before. They wouldn’t allow a manned camera in these locations. Since this has a smaller profile, we can work with the USTA to try to get it a little bit closer to the court and not have a manned camera.” 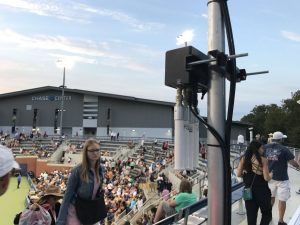 The cylinder-shaped system features a Sony HDC-43 aimed skyward and off a mirror. It features a Fujinon 42X1.7 wide-angle lens, rather than the 42X13.5 lens deployed on SNB. The camera chain comprises a Sony BPU-4000 baseband processor unit (for 6X slo-mo), HDCU-2500 CCU, and RCP-1500 remote-control panel. The entire system runs on two fibers into a Sony HKCU-SM100 CCU extension adaptor.

“I think it will be great for tennis,” says Brady. “We have the opportunity to move it over the course of the first week to multiple positions and evaluate it, so we’ll see how it goes.”

All the starring camera systems from recent ESPN US Open productions are back this year, including Intel’s 28-camera freeD 360-degree replay system, a SpiderCam aerial system, a RailCam, and an NAC Hi-Motion II ultra-slo-mo at Arthur Ashe Stadium. Also among ESPN’s 100-plus complement of cameras (including 60 broadcast cameras) are a HoistCam, four 3X super-slo-mos, 13 robos, four RF cameras, and five jibs.

In terms of sets, ESPN has brought back the practice-court set that debuted in 2015, offering a view of players practicing in the background, along with its long-time main set located at the Fountain Plaza near the Unisphere.

In addition to an army of cameras, ESPN has a stacked arsenal of virtual-graphics/analysis tools. Though used at Wimbledon this year, ChyronHego Paint is deployed at the US Open for the first time, in conjunction with Avid MVP, ADvision, and TD Control — all staples of ESPN coverage in recent years.

“We brought ChyronHego Paint into the mix this year, along with our [Avid] MVP product to work in tandem,” says Brady. “Those boxes do slightly different things, so it gives us a little broader palette to be able to construct feature pieces and analytical pieces that our production group would like to see for the fans at home.”

In the wake of the recent RF reallocation, ESPN is exploring new technologies that it hopes will alleviate wireless-camera and -microphone challenges in the future.

“We always try things,” says Brady, “but. if you don’t get a full test of it and really put it through the paces, then you’re still going to have a little trepidation using a new piece of hardware the following year. Having two weeks here gives us a great opportunity to fully test new [technology].”

Chief among these new technologies is a Silvus Technologies’ Mesh Network, which operates in unlicensed spectrum and uses a COFDM transmitter to transmit IP streams. ESPN is demonstrating a prototype system during the tournament and successfully operating two wireless cameras over the same Mesh system simultaneously.

“As we see white spaces disappear more and more, we need to find alternatives for transport,” says Steve Raymond, senior technical specialist, ESPN Remote Production Operations. “We’ve taken it all around the [NTC], and it’s every bit as robust as what you’d expect from a conventional [RF] system. The other interesting feature is that, since it’s an IP stream passing over an Ethernet interface, all signal routing and control can be managed by off-the-shelf technology. Once you have a bidirectional Ethernet pipe, everything becomes pretty easy to [transmit] — whether it’s camera-control data, video, audio, whatever you want.”

According to Raymond, the trick is to build all this potential into a single interface, which has yet to be completed. However, the Silvus Mesh Network also features a reporting layer, allowing ESPN to see, via a single user interface, the performance of all the devices on the network.

“With the changing spectrum situation, it’s the Wild West right now in terms of where we’re going to operate and what modulation schemes will be allowed,” says Raymond. “Who knows what the future holds. This could be a viable alternative to not only simplify our [RF] deployment but also deal with disappearing spectrum.”

ESPN is also using the new 24-channel GTX Series 6.5-GHz Ultra-Wideband wireless microphone system from Alteros, an Audio-Technica company, at Practice Court 1 and for on-set interviews. The practice-court system is a single GTX3224 main unit for control of all four locations. For interviews, players are being wired with a GTX24 beltpack while riding in the elevator leading to the announce set, enabling the interviews to start before the player is even seated at the desk.

ESPN is demonstrating the SimplyLive ViBox all-in-one-production solution (bottom) on a practice court integrate with Fletcher robos that allow the operator (top) to take over any of the four cameras at any time.

Also new this year is a Waves SoundGrid system for automated audio processing. CLICK HERE for more on that and SVG’s full coverage of ESPN’s audio efforts.

Outer-court coverage: Hawk-Eye is back; Simply Live ViBox gets a test-run

Sony’s Hawk-Eye SMART Intelligent Production technology is also back covering the outer courts. In parallel, ESPN is demonstrating the SimplyLive ViBox all-in-one live-production system integrated with Fletcher robotic cameras on a practice court as a potential solution for outer-court coverage. It features two tracking cameras low on each side of the net, as well as a slash and an overhead main camera. The robotics operator can take control of any of the cameras at any time and also has full replay and graphics capabilities on all four cameras.

“The simplicity and ease of operation of the ViBox is intriguing to us,” Brady explains. “Plus, these are broadcast-quality cameras. We’ll make full evaluation, and we’ll see where we go next year. So we’re just basically opening the door to new possibilities and new technologies as we move forward.”

Suggestions for the new Armstrong 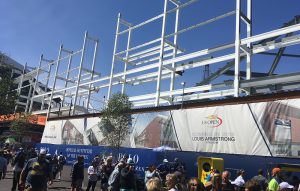 “When a new [venue] is being constructed, we can contribute to the overall plan by picking camera positions that don’t involve court access and create better angles,” notes Brady. “We also are able to work with the in-house folks to pull the power and fibre and terminate it, so that we can we continue to build on our extensive fiber [infrastructure]. The USTA has been very receptive to our suggestions, and it’s been a solid relationship that I think is going to be great for the venue and great for broadcast.”