Live from the US Open: New automated production helps ESPN go live from all courts

For the first time, ESPN is covering all 16 courts at the US Open, thanks to a new automated production system deployed on the nine outer courts at the USTA Billie Jean King National Tennis Centre (NTC).

Having debuted at Wimbledon in July, the Fletcher Tr-ACE motion-detecting robotic camera system has been deployed on each court (with four robos per court) and relies on SimplyLive’s ViBox for switching and replay and an SMT automated graphics system. With this workflow, one robotic camera operator and one ViBox director/producer is covering each of the nine courts.

“With one production room and one rack room here, we are essentially replacing what would have traditionally been nine mobile units,” notes ESPN director, Remote Operations, Dennis Cleary. “We’ve been working on this plan for a long time, and there is just no way we would have been able to cover all these courts in a traditional [production model].

“SimplyLive has been used at other [Grand Slams], and it was used with Fletcher Tr-ACE at Wimbledon but not really to this extent. We feel that we have taken it to the next level [and] are integrating it with our overall [show] and adding elements like electronic line calling and media management.” 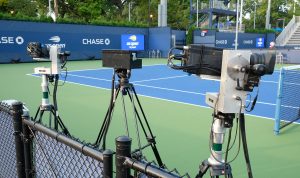 With all 16 courts now accessible, ESPN can present true ‘first ball to last ball’ live coverage across its linear networks and the streaming platforms (a total of 130 TV hours and 1,300 more streaming on the ESPN app via ESPN3 and ESPN+. Moreover, ESPN was able to provide the USTA with live coverage of last week’s qualifying rounds for the first time, deploying the Tr-ACE/ViBox system on five courts.

In addition, ESPN, which serves as the US Open host broadcaster, has been able to provide any rightsholder with a live feed of a player from its country — regardless of the court and including qualifying rounds.

Four Fletcher robotic systems with Sony HDC-P1 cameras have been deployed on each of the nine outer courts: two standard robos (traditional high play-by-play and reverse-slash positions) and two Tr-ACE automated robos (to the left and right of the net).

“From the beginning, one of ESPN’s big focuses was increasing the camera quality of what was being done on the outer courts,” says Fletcher Sports program manager Ed Andrzejewski. “So we built everything around the Sony P1’s to increase the camera quality to match the main [TV courts]. When they send a feed to the rightsholder in Australia and the player they are interested is on one of those outer courts, they wanted the basic quality to be the same as in the bigger stadiums. I think we’ve been able to accomplish that.”

Between the two Tr-ACE cameras is ‘the puck’, which powers the Tr-ACE system at each court via a 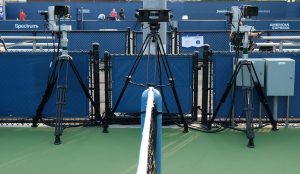 custom-designed LiDAR (Light Detection and Ranging) image-recognition and -tracking system. The LiDAR tracks every moving object on the court (the ball, players, ball kids, judges) and provides the two Tr-ACE cameras with necessary data to automatically follow the action on the court. The LiDAR can also sense fine details on each player (such as skin tone or clothing colour), allowing the cameras to tell the difference between a player and other moving objects.

A room of its own: Nine mobile units in a single room

ESPN has erected a dedicated production room for the Tr-ACE/ViBox operation across from its NTC Broadcast Centre. Inside this room are nine workstations featuring one Fletcher Tr-ACE camera operator and one ViBox director/producer each.

The Tr-ACE operator monitors the camera coverage and can take control of any of the four cameras at any point during the match. Meanwhile, the ViBox operator cuts cameras and rolls replays. An SMT touchpad at the workstation is used only during prematch coverage. All other graphics elements, including the scorebug and lower-thirds, are fully automated, and informational elements are triggered by preconfigured settings in SMT’s data feed (for example, 10 total aces or 10 unforced errors).

“The camera op and director are constantly communicating,” Andrzejewski explains. “ESPN put a lot of trust in us with this, so we brought out the best people we could and have some of the best [robo operators] in the business here. There was a lot of onsite learning, but we were able to give everyone lots of time on the system during setup and qualifying.”

The coverage does not feature commentary, so all nine courts are being submixed out of a single audio room using a single Calrec audio console and operator.

Also inside the automated production room are a video area to shade all 36 cameras, an SMT position to manage the automated graphics systems deployed at each workstation, an electronic line-calling position (which was not available for the systems at Wimbledon), and a media-management area, which was used during qualifying to record all five courts (this operation moved to the NTC Broadcast Centre once draw play began last week).

Since the automated-production systems had to be up and running for qualifying rounds last week, ESPN built the operation on an island entirely separate from the Broadcast Centre.

“It was just too costly and just not sensible to bring the full broadcast centre up a week early,” notes Cleary. “So this entire operation is all standalone. All the equipment from Fletcher, SimplyLive, Gearhouse, and even transmission is all separate and on its own.”

Two-plus years of development pays off

Although automated production is nothing new for the US Open — Sony Hawk-Eye technology had been used for several years to produce coverage from five outside courts — this new system has expanded the ability to truly cover every ball of the tournament.

Use of the Tr-ACE/ViBox system at Wimbledon in July and now at the US Open was a long time coming. Fletcher has been developing the Tr-ACE system for 2½ years and demonstrated it offline on one court at the NTC last year.

“This is certainly a new workflow for us, so a lot of thought and time went into it before we deployed it,” says Olsen. “We felt that the ViBox and the Tr-ACE would certainly give us the ability to produce a high level of content using an automated [workflow], and it’s worked out really well thus far.

“Having it for the qualifying rounds for the first few days also served as a great test bed. I think the best way to put it is, we’ve grown into it and we’ll develop it and take it to higher level each time we use it.”