Live From the US Open: Single app serves up everything the fan would want

The US Open digital experience has been streamlined this year with one app that supports all the fan’s needs, both onsite and offsite. It’s part of an effort to strengthen the bond with tennis fans wherever they are.

“It’s really difficult to message to consumers to use this app when you are here and this app when you are not,” says Kirsten Corio, managing director, ticketing and digital strategies, USTA. “It’s not about saving costs, development time, or resources. It’s about wanting everyone to gain from having a singular US Open experience.” 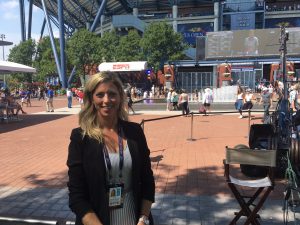 It doesn’t take a long time with the new app to see how it makes a difference for fans in the stands and at home. It offers greater social-media integration, more highlights, and, thanks to a 360-degree camera, even offerings like live coverage of players warming up.

“There were some questions about whether a live stream of practice would hurt our broadcast partners and owned-and-operated platforms. What we’ve learned is that it won’t hurt them at all and, if anything, it drives interest,” Corio points out. “If you see how Roger Federer looks warming up, you are more likely to watch the match later. So that has been a big learning this year: more is better.”

Onsite, however, is where the app shines, beginning with the use of digital tickets. Fans download the app to access their tickets and can forward tickets to friends or resell them. In addition, a new interactive map has filters for things like courts (to see live scoring), amenities, dining, shopping, and even attractions, offering descriptions and exact locations relative to where the user is standing.

“The interactive map is what I am most proud of because it generates a pinpoint location of where you are on the grounds and then overlays other things on top of that,” says Corio. “The other cool thing about the map is that it is connected to the digital concierge, which makes use of IBM Watson intelligence.”

Watson is used within the app to answer fan questions via digital concierge. The concept is simple: users ask questions, and Watson matches the question with the appropriate answer. The more questions that are asked and answered, the smarter Watson gets.

The digital concierge, however, does not mean the end of human interaction; it can connect the user to a real person. It is instead meant to streamline operations for the onsite support teams.

“We haven’t taken humans out of it,” Corio explains, “but, instead, make it complementary so we can ease the load on the command center and guest relations that have face-to-face interactions.”

The other place where Watson is starting to shine is as a tool for video-highlights creators. Watson’s artificial intelligence is used to create “cognitive highlights” that are not necessarily simply the last points of a game or a match point. Instead, Watson looks and listens to incoming video and audio feeds to determine exciting moments (for example, an exceptionally loud crowd reaction) and then offers the clip to an editor, who can then ready the clip for distribution.

“Video producers and editors love it because it is an additional tool,” says Corio. “Last Wednesday, we had 87 matches. You need something like this to cover that many matches. And fans want content in real time, so you can’t spend the time you used to in creating highlights.”

The app also takes that content to the next level, delivering links of content directly to a fan’s smartphone via push notifications on the lock screen.

“If you follow a favorite player from a small country,” adds Corio, “you may be hard-pressed to find the highlights. We can deliver it to the fans.”

The social-media team is also exploiting video assets and even livening them up with additional sound and graphics effects that can turn an ordinary highlight into an internet sensation. Corio attributes much of the improvement to Qianna Smith-Bruneteau, who was brought on as USTA director, social media and strategy.

“Qianna brings so much creative energy, frequency, and sheer determination to get the best content out there in real time,” says Corio. “The social team is producing more and more live content like streaming practices, and the appetite from fans is insatiable. We are seeing metrics up 400%-600% on interactions compared with last year.”

And then there is Fan Pass. A fan registers and is sent a QR code that is available through the app. Then, as the fan passes around the grounds, the QR code is scanned, earning badges that can help the fan win≥Ò˚ prizes like tickets, gift cards, and more.

All the new features are compelling fans to fire up their phones and interact with the US Open more than ever. And the challenge is that getting fans at an event addicted to using their phones to engage with the event puts a strain on two things: the Wi-Fi network and phone batteries. The former is a battle that can be hard to win: better Wi-Fi makes it easier for fans to use the network, which in turn increases the demands on the network. As for the second, the US Open once again is solving that problem with “Charge and Watch”: fans who have an iPhone 5 or later can pick up a small cradle that can charge their phone and allow them to watch up to three video feeds via RF delivery.

“They don’t have to use their data, it has a dual purpose, and it’s free,” notes Corio.

It has also been a big hit, like nearly everything digital at this year’s tournament.

“Overall, we aim to be the world’s most spectacular sports entertainment event, period,” says Corio. “We’re not just sports, and we’re not just entertainment: we’re sort of a music festival married with sports. And we need the platforms to convey that, both for the fan onsite and for the fan offsite. Mobile ticketing helped us do that; the interactive map helped us do that. But [we still need] to deliver the best content from the best matches out to the fans worldwide.”

Doing that requires a commitment to ensuring that the team can create the depth of content required without sacrificing breadth. For example, about 40 hours was spent making sure that there was something on the site related to every player involved this year.

“We want to make sure that content for every player, from Roger Federer to the youngest qualifier and junior, won’t lead to a dead end,” Corio explains. “That is the kind of thing that is unheralded but is the kind of thing we are committed to: making sure that, no matter which player you follow, there will be something in the platform.”