The FIS Alpine World Ski Championships are being held in the United States for the first time in 16 years and much has changed in the world of TV production since the last time the event was held in Beaver Creek and Vail, CO (where it is again being held). And this year it is up to Eurovision Production Coordination, working alongside technology service providers like Game Creek Video and Bexel, to make sure the production is all it needs to be.

“We are trying to lift the production level for an Alpine skiing event here in North America and leave a legacy,” says Franck Choquard, Eurovision Production Coordination, managing director. 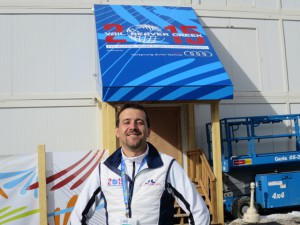 The event runs from Feb. 2 to Feb 15 and nearly every day (with the exception of Feb. 11) features a mix of training runs and 13 medal events. There are 26 rights holders around the globe and 20 of them have a presence on site. The 1,500 square meter International Broadcast Center, located near the finish line at Red Tail Stadium, is home to about 400 production people every day, including staffers from Eurovision, NBC Sports, ORF (Austria), ARD/ZDF (Germany), France Televisions; YLE (Finland), SVT (Sweden), and SSR/SRG (Switzerland).

“The top three for this event are the Swiss, Austrians, and Germans,” says Coquard. “For the Swiss and the Austrians this is their Super Bowl and with the broadcasts in primetime they will have a marketshare around 80%.”

A production team of more than 200 is on hand to capture all the happenings (plus medal ceremonies, press conferences, and more) with more than 60 cameras, including more than 50 Sony HDC-1500 cameras with Canon lenses, five Sony HDC-3000 high-speed cameras, Antelope super-high speed cameras, and a CamCat wired aerial system that covers 700 meters on the men’s course and 400 meters of women’s course.

“We will have a maximum of 45 cameras for one race and a total of 18 EVS machines and operators,” says Choquard.

The core event coverage is produced out of three Game Creek production units: Amazin’ and Dynasty A and B units.

“Because we have men and women events on the same day we need three production units,” says Choquard. “Amazin’ covers the women’s events, Dynasty A the men’s events, and the Dynasty B-unit does the pre-cut production.” 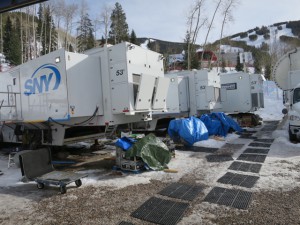 Three production trucks from Game Creek are at the center of the production of the FIS World Ski Championships.

Bexel was hired to lay fibre for the course as well as to connect the medal’s plaza in Vail to the compound at Beaver Creek and lay down 200 fibre patch points. As of Feb. 5 those patch points have been used more than 800 times by both Eurovision’s team and the rights holders as cameras are added to the start line, the mixed zone at the finish line, and more.

“We sized it big and it almost fully loaded,” says Choquard.

One hot innovation that isn’t in use is drones and it is not for lack of trying.

“We studied a lot of alternatives and faced a few issues like altitude and wind,” says Choquard. “But the biggest challenge we had was that 95% of the event is on Federal land and you are not allowed to operate drones for commercial purposed on Federal land.”

The CamCat aerial system solves those issues and also has the speed required to keep up with skiers speeding down the course at up to 70 miles per hour. And like the high-speed cameras and the two wireless cameras at the bottom of the course it is proving to be a solid investment. 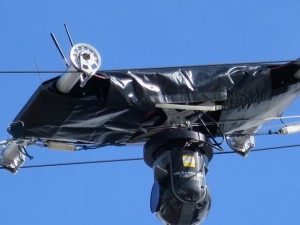 “When you get the super high-speed images at the right time and moment they offer amasing pictures,” says Choquard. “And we’ve been asked why do we need two wireless cameras at the bottom of the course but today, when [U.S. skier] Bode Miller crashed we could get a close shot of his wife and the emotion. And sport is more than action; it is the emotion carried to the people around it.”

Eurovision is also producing a “World Feed Plus” which is a second feed that offers an additional two-plus hours of coverage for everything from the morning inspection of the course, the ceremonies, bib draws, and additional slow-motion coverage that might not have made the original world feed due to time constraints.

“Additionally, when we have time we interview the skiers and coaches,” adds Choquard.

That feed has already paid off as on Feb. 4 the men’s Super G race was postponed due to weather. The Swiss broadcasters were able to take coverage of the morning inspection that led to the cancellation and create a 40-minute show to explain to viewers what was happening.