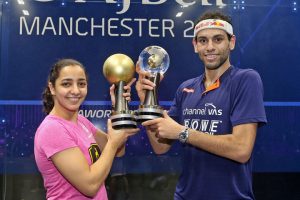 During a sporting weekend in which Manchester City thrashed Spurs 4-1 in the English Premier League, Australia regained cricket’s Ashes and athlete Mo Farah was named BBC Sports Personality of the Year, it was perhaps easy to miss that two World Champions were crowned in Manchester.

The quarter-finals, semi-finals and finals of the AJ Bell-sponsored PSA (Professional Squash Association) World Championships 2017 took place over four days at the Manchester Convention Centre. The semis and final were broadcast live on BT Sport in the UK and in 155 other countries around the world. Those rounds plus the quarters were also shown via Squash TV and on Eurosport Player.

The company that produced the world feed for the World Championships is MOOV, the London-based graphics and fly away production firm. It is in the final season of a three-year deal with the PSA to provide host broadcast services from all of the sport’s World Series events.

The big difference between what MOOV does and how some other host broadcast operations might operate comes down to scale and finances. Squash is popular but it’s certainly not the Premier League.

Squash is a big amateur participation sport around the world, especially in Asia and the Middle East but also in the UK and the US, and is said to be played by more than 20 million people globally. There is also something of a resurgence in the professional game with the PSA Tour now offering increasingly large amounts of money, and parity for the sexes, across its events

Of course, a total annual prize fund of US $6m (£4.48m) is dwarfed by a sport such as tennis where it is possible to pocket £2.2m just for winning Wimbledon. And let’s not even start to compare these figures to football or NFL.

Within this context, it is clear that any TV coverage is unlikely to benefit from the kinds of budgets associated with those sports. And that is most certainly the case. But that is not to say that squash lacks polish. It simply takes a bit of ingenuity to make it happen. As a result, MOOV’s set-up for each squash event is lean and efficient, making the absolute most of the resources available. 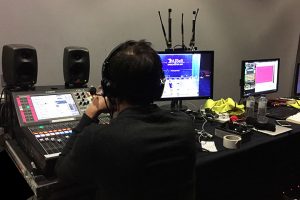 The flyaway production set-up, which tours the world, taking in all the PSA events from Philadelphia to Hull, was built by Timeline Television. It consists of seven Panasonic cameras, a Newtek 3Play for replays, a ChyronHego Mosaic graphics system and a Yamaha QL1 for mixing the sound. Blackmagic Design kit is also a key part of the system through its 4K Atem vision mixer and a 40×40 matrix. Clear-Com is used for talkback while an Ereca frame connects the Panasonic cameras over SMPTE.

The camera line-up includes six remotely controlled hot heads and a manually operated hand-held RF camera that follows the action during a match and is then removed from its overhead position so that it can be used for post-game interviews. A Boxx wireless system makes that possible.

Just seven members of crew are required to operate this set-up, even for the World Championships.

“Efficiency is absolutely key,” explains MOOV director Nev Appleton, speaking to SVG Europe on the day of the quarter-finals. “The bums on seats count needs to be low. Every person has become multi-skilled. They all rig together, everyone can rig a camera, rig the graphics kit, rig the replay system. The same team, including the match director, travels the world.”

The system is rigged in a single day with de-rig taking the same amount of time. There is very little sitting around, he admits. “It’s very lean. That is how we make it cost-effective.”

Despite the efficient nature of the production, they have experimented with different technology in recent times. 4K has been trialled, through BT Sport, and for an event in Dubai, the production team hired and used a Polecam for overhead shots. Appleton is keen for both to become permanent fixtures, budget allowing of course.

“At some point, depending on how the sport develops, we’ll look to upgrade to 4K,” he says. “There is a massive difference in 4K. The ball-follow is fantastic and the clarity of the what you see is unbelievable. We got a lot of good feedback from the Polecam trials and, as it can be carried around in a large suitcase between events, it is ideal but it requires another person to operate it so with a small crew we have to bear this in mind.”

Looking further into the future, Appleton can see two other areas that could really benefit squash coverage. The first is super slo-mo. 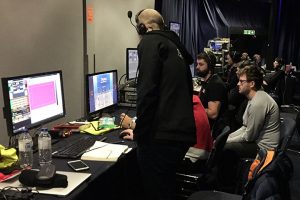 He says: ”One of the things that the sport is crying out for is improved coverage of ball pickups, [where the player hits the ball close to the ground]. There is a lot hanging on a ball being up or down and it can be difficult to call as the ball is moving so quickly, in some cases over 170 miles per hour. A high motion camera system would solve this for both the video referee and the viewer and be a real benefit to the sport.”

On-screen data would also be hugely beneficial, suggests Appleton. In Manchester, as a trial, Insight, a sports analysis company, logged data throughout the finals and fed this to the on-air commentary team. The ultimate goal for MOOV would be to integrate these live statistics with its graphics output to help make the sport more coherent for the non-squash aficionado.

“If we can tell viewers that the players are moving quicker than a Premier League footballer, or that they are covering half a marathon in some long matches or how many calories they are burning, it would really help. Squash needs that wow factor. It can help the players too.”

The PSA World Championships 2017 were shown live on BT Sport and around the world, as well as online via Squash TV and Eurosport Player, 14-17 December 2017.