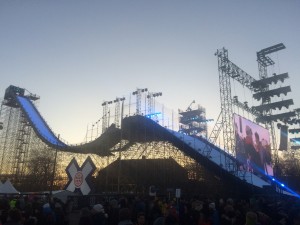 US broadcaster ESPN and Norwegian partner TV2 brought the former’s hugely popular action sports competition to Oslo last week (24-28 February) for a spectacular sequence of snowboard, ski and skateboard competitions. Delivering camera configurations that enabled TV2 and outside broadcast service provider OB-Team to capture all the drama while maintaining complete safety at all times was among the primary challenges confronting the teams.

Ola Gråberg, project manager and executive producer for TV2 (together with director Nicolai Sørensen), confirms that conversations with ESPN about a Norwegian event began approximately 18 months ago. “It has been a great collaboration with [ESPN]; there have been a lot of discussions about how to do this and evolve that, and adapt it to the Norwegian people. The result is that there is a Norwegian flavour, but it is mostly the traditional X Games.”

Over the course of the actual, approximately 12-month-long build-up period, ESPN and TV2 worked with local organiser SAHR Concepts to stage an event combining snowboard, ski and skateboard competitions – the first time both summer and winter sports were contested internationally in the same city at an X Games event. Three primary sites were involved in the Oslo event: Skur 13 (skate), Tøyen for Big Air (ski and snowboard) and Wyller for Superpipe (ski and snowboard). Bringing a musical flavour to Saturday’s proceedings at Tøyen was an evening concert featuring both Norwegian acts, including EDM producer Adam Walker, and international performers such as US hip hop artist Yelawolf.

Speaking to SVG Europe in the shadow of the extraordinary Big Air superstructure – the result of an intense ten-day build period and featuring a 57m high ramp – Gråberg explains that the Tøyen events were captured with an 18-unit camera configuration. While Sony HDC 1500R cameras predominated, aerial shots were captured with a single helicopter-located Cineflex and two Marshall MiniCams were positioned at snow level. A GoPro with a wide angle lens was located on the elevator. Production was overseen from OB-Team’s HD3 truck, whose specification includes a Sony MVS-7000X HD video mixer, five 8-channel EVS servers, a Studer Vista 5 audio console, and a Riedel Artist matrix intercom system.

As at the other venues, ESPN brought its own GFX operators to run the Top Hat graphics at Tøyen. For TV2 and OB-Team, Vizrt graphics were overseen by Espen Thomassen. Production format was 1080i50 HDSDI / 8-ch audio, with the EVS servers running ProRes 422 SQ and 4-ch linear PCM.

For Saturday’s musical proceedings – which interspersed sporting events at Big Air from mid-afternoon onwards – OB-Team’s HD4 vehicle was the centre of operations. The concert was directed by Øyvind Sæbøe Johansen, who also worked on the sporting elements of the X Games.

HD4 was also used to cover events at Skur 13, whilst another vehicle in the extensive OB-Team fleet, H2, was dispatched to Wyller. There was no 4K element to X Games Oslo, and it was not considered for this event, confirms TV2 VP production news and sports Jens Cornelius Knudsen. 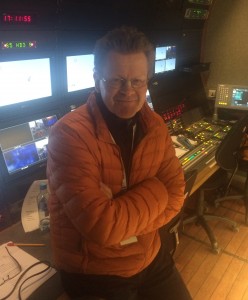 Maintaining crew safety throughout the build-up period and actual event proceedings was inevitably “the biggest challenge,” confirms Johansen, but the effective collaboration between TV2, OB-Team and SAHR Concepts helped provide as smooth a backdrop as possible. “OB-Team have really done a great job of planning and executing all the requests that have been made to them. It really has been one of the calmest productions I have ever been involved with,” he adds.

The event certainly hasn’t been without its fair share of controversy – Anti-Doping Norway and the Norwegian Ski Federation dropped out mere days beforehand due to the lack of an in-competition anti-doping programme. Subsequent to the final day, it was reported by NewsinEnglish.no that ESPN is to “evaluate” a return to the city.

But whatever the future, Knudsen is confident that X Games Oslo will be regarded as a success both for the broadcast partners and the city itself. “We have had a fantastic reaction [from visitors] to this event, and the hope is that it will become an annual event,” he says.