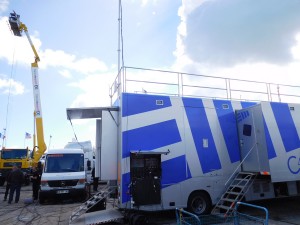 Working alongside France Télévisions on the host broadcast production of the world’s best-loved cycling event, the Tour de France, EUROMEDIA is responsible for providing all the RF facilities for the world feed as well as the French public broadcaster’s unilateral feed of the ASO race.

In recent years, EUROMEDIA has added a number of new RF cameras to the production, as well as undertaking experiments with the innovative SMACS (SMArt Connected Sensor) technology that allows a wealth of information about cyclists’ performance to be used both on- and off-screen. As the initial stages of this year’s event got underway, Bruno Gallais – who heads up international business development, wireless production facilities at EUROMEDIA – reflected on the elements of the RF set-up that are new for 2016.

Can you talk us through the main elements of the RF production?

Five VHF wireless cameras (specifically, Grass Valley LDXs) are positioned on motorbikes to capture the action from the road level. We also have two helicopters with Cineflex gyro-stabilised camera systems. In previous years we had one Cineflex on one helicopter and two on the other, but now we have standardised to two Cineflexes on both helicopters. We have two pressurized plane and one helicopter at our disposal as well to relay the pictures. Two intermediate RF receiving points are used to extend the global coverage of the race that could reach 6 hours live like this Sunday in the Pyrennées. Beside the RF system we have two high-speed cameras (2,500 frames/sec) on the finish line for the final sprint.

That’s right. We have one camera on one rider for each of three teams, and the system is set up to allow for footage to be transmitted live to the finish line without terrestrial delay on three stages this year (without additional motorbikes as relay within the peloton). Of course the weight of the cameras is very important and they have been designed such that they weigh only 700g per unit. The cameras are very innovative and basically the size of a finger! We are very pleased with the results of this process so far as it allows a further element to be added to the onscreen coverage.

Are you continuing to use the SMACS system after its successful trials in recent years?

Yes, SMACS continues to be a major part of our work on this event. SMACS involves the deployment of sub-80g sensors located under the seat of each rider. Data gathered from the sensors (operating in low UHF/VHF frequency ranges) is then relayed back to a variety of intermediate points – specifically, cars and motorbikes located close to the route of the race – and then via RF uplink back to the OB truck or 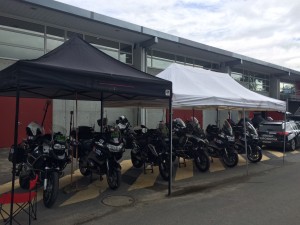 broadcast centre. Precise information on rider performance and exact position at any given time is among the data that can then be logged for future reference and, more imminently, incorporation into on-screen graphics. The two data feeds provided by EUROMEDIA are delivered in the TV compound to manage the web application and services for [Tour de France organiser] ASO as well as all the teams and the broadcast signals graphics applications for France Télévisions.

What about 4K or IP-based production?

No, there is no 4K this year, and there hasn’t really been a conversation about doing that for this event so far. There is no IP-based production either as yet, but that is definitely something we are thinking about.