Live from US Open: ESPN, Gearhouse Broadcast and a new day for tennis coverage 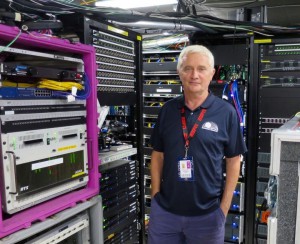 The US Open technical facilities are the culmination of a solid year of work on the part of both ESPN and Gearhouse Broadcast, the internationally renowned provider of production services that is also no stranger to tennis majors given its role at the Australian Open. For more than a decade it has provided the technical backbone for that event (first on behalf of Channel Seven Australia and now for Tennis Australia) and has also worked with ESPN there in recent years as well.

“We used our Australian Open template as the basis for this project,” says Kevin Moorhouse, Gearhouse Broadcast, COO. “Part of our pitch was that we have done this before.”

That successful pitch changed the very nature of the technical facilities that are the heart of the US Open production this year. This is the first year that ESPN is the sole domestic US rights holder and the company is also responsible for the host coverage from the seven courts that have TV coverage. Taking on the entire project allowed for a refresh of the technical infrastructure that previously was a mix of cabins, flypacks, and remote production units. But this year the facility is enclosed within a two story structure that sits behind Arthur Ashe Stadium (some operations, like the four courts that are produced using the HawkEye automated camera system, however are located inside studio 4 in Arthur Ashe Stadium.

“For these big events the flypack solution is a good one,” says Moorhouse. “You can be really flexible and build it bespoke and have a massive production gallery that could never fit in a truck unless it was a super, super, super truck.” 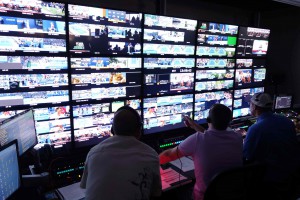 home to camera control units, 32 EVS XT[3] replay servers, two large Snell Sirius 850 routers (one for the host broadcast needs with 576×1200 inputs and outputs and a second for ESPN’s domestic needs (576×880), and more. The Centeral Apparatus Room (CAR) allows ESPN to easily reassign signals around the plant and redeploy resources where needed. As a result, once outer courts go dark, ESPN can move cameras to the main courts for additional coverage at the push of a button. In addition, any host control room can switch any court with minimal effort should a router go down.

“With all those resources, as we move along, the inputs can be repurposed and added, so you’re not wasting resources,” says Terry Brady, ESPN, director of remote operations. “When [the first] five days are done and court 13 is done, we won’t a bunch of machines sitting around. How aggressive we’re going to be with that remains to be seen, but the possibility remains.”

There are also two small Snell 128×128 routers for backup in case a router fails. “We can lose both big routers and still generate clean and dirty feeds for the world,” adds Moorhouse.

The building is powered by existing shore power through a massive UPS (uninterruptable power supply) with a twin pack generator on stand by in case of power failure. Should ESPN lose shore power the UPS will pick up all technical power for a half hour until the twin pack is up and running and takes over.

Next door to the engine room is master control, the first area where any of the rights holders will come to solve an issue and get assignments for different feeds.

“If there is a problem you don’t just want to find an engineer on the street but rather have a centralised room that is always staffed,” says Chris Strong, ESPN remote operations, technical manager who played a key role in designing the structure. “We have all the tools here necessary to check the quality of the signal, look into the streams, and fix a problem.”

Having camera shading for all the courts in one location has a couple of obvious benefits but the most important is that it is much easier to have a consistent look from one court to the next.

“The control rooms are all set up exactly the same with the same button mapping on the switchers and monitors stacked the same way,” adds Moorhouse. “Any director can go to any room and know where camera one is or an EVS replay device is [on the monitor].” 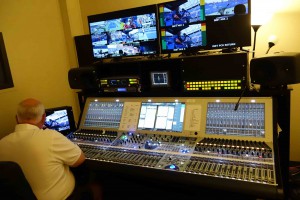 Something not always found in a US broadcast production facility is the presence of Lawo audio consoles in the form of seven Lawo mc2 56 consoles (coupled with two Lawo73 routers and 16Lawo Vpros for glue applications). “Lawo is a very good product and we have Lawo engineers who gave the audio guys trainining so that they A1s could get familiar with working on a Lawo console,” says Moorhouse. “There is also an engineer on call who is an expert.” Gearhouse has also expanded the RF presence on the grounds with the installation of diversity antennas across the ground (and within the tunnels of Arthur Ashe Stadium). The antennas are allowing ESPN, Sky UK, Eurosport, and Wowwow deliver RF camera signals from across the grounds.

United Nations of guys getting it done

The project involved a lot of meetings and planning with CAD drawings of video systems and furniture being laid out and three visits by the Gearhouse team to ESPN’s headquarters in Bristol, CT. It was during those meetings that ESPN and Gearhouse would get down to discussing the smallest details.

“We went through every single operator position and discussed how it would be laid out and where the comm systems and monitors would be as well as what the operator would see on screen,” says Moorhouse. “We then designed the system based around those discussions.”

Hamish Harris, broadcast engineer for Gearhouse, oversaw the video side of the project while Nick Bowey, Gearhouse senior audio manager, oversaw the audio side, and projects server engineer John Currie oversaw the EVS server buildout. Ed Tischler is the head of projects for the entire facility.

“We like this building a lot,” says Moorhouse of the two-story technical centre that is part of a 17,000 sq. ft. footprint that includes operations and production offices located about 100 feet away across the road behind Arthur Ashe Stadium. “It’s similar to the one in Oz with double doors for access and holes in the right place for cabling.”

The Gearhouse team arrived on site on August 4 with about 20 utilities were divided up to handle different tasks like cabling, getting racks in place, and power before the engineering team came in and built out the technical in 10 days.

“The kit came from England and some also came in from Montreal and Cincinnati [where is was used for US Open series tournaments prior to the Open],” says Moorhouse. “We sent over eight 40-foot sea containers and 35 tons of airfreight with four of those containers containing just furniture.”

The furniture, look, and feel of the facilities impress as much as the technical capabilities.

“We wanted it to look like a proper studio like they have back home,” says Moorhouse. “They don’t want to be sitting on cardboard boxes and dresser tables. Those days are gone because it has to look nice and people have to be comfortable if they are going to sit there for 14 days.”

Also helping make things more comfortable was all of the pre-building and pre-planning.

“ESPN productions can be very complex but we knew what they wanted to achieve and even had the audio tracks assigned before we got here,” adds Moorhouse. “We tweaked things but the basis of the facility was done before we even got here.”

When Gearhouse won the contract there was plenty of industry buzz about what it meant to the future of remote production in the US. An event like the US Open gives the company a strong foothold, at least for a couple of weeks a year, within the US market.

“We’ve had an office in Los Angeles since 2003 but it is small and we would like to get into the US market, for sure, because it’s a massive market,” says Moorhouse. “So we are going to start looking at other opportunities but it is not something that will happen overnight.”

But for now the focus is clearly on the next two weeks and getting through the men’s final on September 13 without any major failures or issues.

“We’re really happy at how well the handover went to ESPN,” says Moorhouse. “All the planning and the strong engineering team made that possible as we picked the best guys from all around the world and really had a United Nations of guys to pull this off.”