Live from Wembley: BT Sport brings out ‘all the toys’ for FA Cup Final 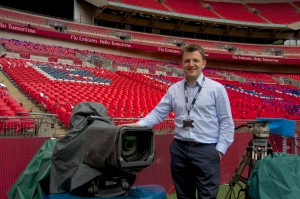 The FA Cup Final is one of the biggest annual events in the sporting calendar, and this year BT Sport, which shares the rights for the FA Cup with BBC Sport, took the lead as host broadcaster. “It is one of our biggest operations in the HD world, but on top of that we added UHD,” with a second truck (Timeline’s UHD1) for the Ultra HD coverage, said BT Sport Innovation Producer Daragh Bass.

“The FA Cup Final is one of the most emotive days in the football calendar,” so BT Sport wanted to use technology “in a clever way to capture that emotion,” said Bass. “This is the day when we bring out all the toys,” like Spidercam, along with multiple hi-motion camera setups.” It uses four super slow cameras and four hi-motion (250fps) cameras. Two of these were Antelope Pico high-speed cameras mounted on Polecam rigs, one in each goal.

It used a Polecam at the semi-final, and this was a great success, as it “offers a new view, not looking through the net, but in the net looking out, offering an unobstructed view of the goalmouth for high balls, crosses coming in, the keeper going out to save them, shots on goal, or goals.” It works particularly well for penalty kicks. The camera was HD, as there is no suitable, small-format high-speed camera available, with the 1080/50p output up-rezzed to UHD. 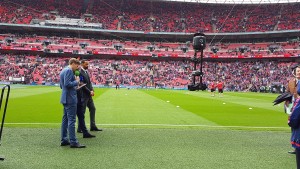 Presentation skills: Spidercam is a useful camera for pitch-side discussions

“Spidercam offers a fantastic view of proceedings, from a tactical view, but also adds colour. We can do some really innovative shots. It’s one we always really like to bring out on the big days.” However, it was only HD for the FA Cup, due to the technical limitations of how they get the feed back from the rig available in the UK, but a UHD Spidercam is due to be trialled on the Champion’s League Final in Milan this weekend.

Another innovation is that it has given Howard Webb, the former international referee, a referee review station, with all the camera angles, to adjudicate on any contentious decisions — which has been very well received in its Premier League and Champion’s League coverage.

There were several shared cameras for UHD and HD used at Wembley. “That is very much setting set us up for next year, when we’re aiming for single truck production, generating our source content in 4K,” said Bass. BT hopes to start unified production for the Premier League next season, and potentially for the Champion’s League, and other sports like rugby. 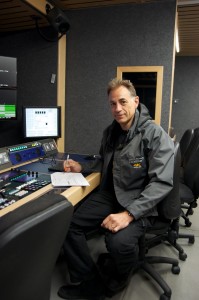 On Saturday, five of its UHD cameras were shared across both the UHD and host (HD) broadcast: camera 1, the two 18-yard cameras, and the two manager cameras. With the main camera being UHD “you can see the difference, even in HD,” he said, “because it’s the best glass there is, the best camera technology, so even in HD, the UHD down converted delivers a noticeable difference.”

As shared cameras they need to provide coverage to both productions. “It does mean that the shared cameras are not under our director’s talkback,” said Timeline TV’s Lead Engineer Jon Ward, who worked as vision guarantee at the final, and helped design and build UHD1.  “That’s why, if you look at the five cameras they are using, they all have a very specific purpose, briefed in advance,” added Bass.

On Sunday, the truck did a full UHD/HD simulcast at Wembley for the FA Vase (for non-league clubs), using 14 UHD cameras, plus two up-converted HD, and outputting down-converted HD. “That’s probably how next season is going to work,” said Ward.

“There’s not much that we can’t do in UHD that we can do in HD,” said Bass. “There are a few elements that we are still missing that we are working on with our suppliers, such as RF cameras; the delay is coming down, but it is still not close enough to do as a live cut.” BT uses RF cameras a lot, particularly in rugby.

At present, the UHD set up uses fewer cameras (on Saturday, there were almost three times as many HD cameras as UHD — with a few of the HD cameras being upconverted for the UHD presentation), and there was a different commentary team, including separate half-time analysis using the UHD camera angles. Viewers watching UHD at home “really do notice” when you cut back to HD — “it’s like watching HD and you switch back to SD.”

The HD to UHD conversion is good. “Key to what we’re doing is the Kahuna mixer. It’s been a revelation. It’s a real enabling factor to allow us to do this sort of production. It means we can take quite a few HD sources in to the mixer without a load of outboard, because it’s format agnostic. It can take any source and up-convert it to UHD, and any source and down-convert back to HD.” It doesn’t need separate convertors, “vital, especially in trucks, where space is tight,” he said.

Although it is moving to complete UHD production, there will be some areas, such as body-worn ref cams or other specialist cameras that won’t initially be available in UHD (or the transmission paths won’t work in UHD) that would be more usable in 1080 50p. There are lots of miniature cameras that shoot UHD in 25/30p, but there only a few that can currently do 50p.

Since UHD1 went live last July, it has mainly done football, with some rugby and studio work. It is designed to be small enough to be able to pull in to a loading bay at BT’s Olympic Park studios to offer it full UHD studio facilities.

“We built everything around the Kahuna,” a true 4K/UHD mixer, and the Snell 840 router, which “work very well together”, communicating through the Axon Cerebrum controller, explained Ward. 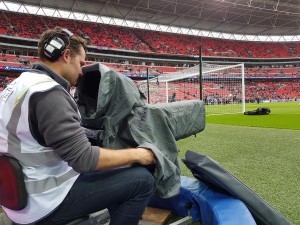 Getting the low down: One of Timeline’s cameramen at Wembley

For the final, it had seven EVS UHD (plus one HD) replay systems and two Sony PWS-4400 servers (one for master record in XAVC, the other for UHD super slow-mo). There were 12 UHD cameras, plus a UHD helicopter camera from Arena. There was also an IO Industries Flare being trialed as a beauty cam. It could have used more UHD cameras, but there are only so many camera positions available, especially allowing for additional cameras for the BBC and other international broadcasters.

Delay for the UHD links is still about 1.5 seconds, “which is fine for heli tele, but not so good if you are doing a stand-up with two people talking,” said Ward. It also makes live racking difficult.

Besides Timeline’s UHD1, Arena (which does BT Sport’s Premier League and FA Cup coverage and provided the HD OB for the final) is now building a UHD IP-based truck (predominantly with Grass Valley equipment), and Telegenic (which does the Champion’s League and Premiership Rugby) is upgrading a number of its UHD-ready trucks to be fully UHD, which will give BT more options for covering big events from one truck.

This year it broadcast all, but one, of its Premier League games in UHD, many Champion’s League games and Moto GP. “A lot of this was building faith with the various sporting organisations, to prove that we can do it and show how good it is,” said Bass. “Everybody who sees it goes: ‘This is definitely the way forward’, so it’s something we need to build on going into next season.”

UHD1 allowed it to essentially do its R&D on the road. “We learnt a huge amount. We tried things, and not everything worked. We experimented with different types of shooting” and also learnt what viewers liked. “When we shoot in UHD, it does allow us the opportunity to slow down the pace of cuts slightly, shoot slightly wider, because there is so much more detail to take in.”

Viewer response has been very positive. “We’ve exceeded our targets by quite a bit,” and a majority of sets sold in the UK over the last year have been UHD-capable. 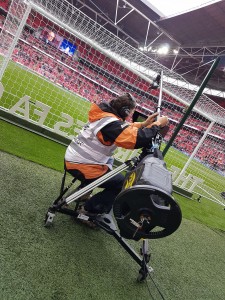 In goal action: Polecam was used to capture high-speed shots through the netting

It has also experimented with HDR, however the technology isn’t ready to do a full rollout. “The issue for us with HDR is that we still have to maintain the SDR. We can make an amazing HDR image today. All our cameras are HDR capable,” as are the mixers and a lot of the transmission path. “The problem is how do you preserve the SDR, which is what we are working with the manufacturers to achieve.”

Flying in the Batcam

The UHD helicopter wasn’t the only camera in the sky around Wembley. Also on site was a UAV from Batcam. Whereas most drone pilots have to remain at least 150m from the public, Batcam has a licence to fly within 30m.

For the Cup Final, it had two launch areas for its six-engine UAV — one behind Wembley, to allow it views into the stadium (for crowd shots), and the other a nearby school, for shots of the fans on their way in.

“The cost of flying a helicopter is a lot more than having a Batcam, so we can be there all day,” said Alastair Soutar, Operations Manager, Batcam. Unlike a helicopter that has limited flying time, the UAV gets 10-15 minutes flying time per battery, but it only takes a minute to swap batteries.

Batcam does a lot of aerial filming for BT Sport and the BBC throughout the season and has five custom-built UAV systems in use (on the day of the final it was also covering the Scottish Cup Final with an octocopter).

It uses Vislink for RF, and for the final used a Sony A7S camera, which takes interchangeable lenses and doesn’t need racking.

“You want to be creative. That’s why the A7S is great. You can blow out the pictures, and see the people on the ground so clearly because you can have so much ISO without the grain. The A7S is an amazing camera. That’s why we stuck with it. It’s small, light, does everything we need,” added Soutar. The A7S was used in HD mode, although it can deliver UHD, but not at the frame rates BT Sport UHD requires. For next season Batcam is looking at cameras like the IO Industries Flare, which can do UHD at 50p — although that would need to be racked from the truck.

It also used a new product at the final, the Batcam FPV (first person view), essentially a GoPro on a selfie stick, with a tiny Vislink BacPac live (300-milliseconds) link, which it handed to players after the match to get their point of view of the celebrations. “You get some incredible shots with it,” said Soutar. It is very simple for the user — “the clever bit is in the link.”

“Sometimes you have to be adventurous and give things a go. It only takes one shot to make it work,” added Bass.