The 5.1.4 immersive audio format adds a height dimension to standard 5.1 surround sound and has been used on other productions by the broadcaster, including almost 18 months on football. 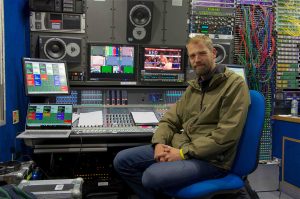 However, boxing has its own challenges, particularly the music. “For boxing there’s much more music, there’s performances, all the walk-on sequences. We’re going to put that into the height, which is different to the football,” said Nik Taylor-Pugh, Sky sound supervisor. There is also a DJ in the stadium, for inter-round music, which Taylor-Pugh wouldn’t want to muddy in the stereo field, or in the front speaker for 5.1, so that goes in the height as well.

“The big benefit of putting Atmos here is to get the perspective of being at Wembley stadium,” to give stereo and 5.1 the added dimension of height, said Robin Broomfield, technical specialist working for Sky on future technology. “You get a real feeling that you are in the stadium, with fans all around you,” which gives added impact, especially to the ring walk.

For productions, one of the great things about Atmos is how little extra equipment it needs on site. All the microphones Sky usually uses on boxing in 5.1, were also all it needed for Atmos, particularly the SoundField surround microphone fixed to the gantry, high above the ring. “From within that we can take more elements than we’re currently using and we can add the height,” explained Broomfield. Elsewhere, it uses the same number and positioning of microphones. “We’ve found that we already have enough elements to use to create that height as well,” he added.

The only question might be where to place the SoundField. “In 5.1 you might want to get a bit more separation, but if your aim is to put the viewer in the crowd, then you might not be so worried about close claps or shouts in the Atmos world, whereas you might be more concerned in 5.1,” said Richard Williams, senior audio guarantee, Telegenic.

But for football and boxing they put the SoundField in the same place as they would for 5.1, and then what goes in the height channels is the creative element, trying to put the viewer in the crowd.

The SoundField DSF-3 Mark II processor decodes the height information, forming the basis of the SoundField bed. “The exciting thing about boxing is the elements that are included in a football match coverage, such as a live PA feed, isn’t necessarily part of the normal 5.1 mix, but in boxing, because it is in a live arena where the PA is a prominent part of the production, it’s an opportunity to use it a lot more, and that is a prominent source in the Dolby Atmos mix as well as other object-based sources,” said Aaron Harte, sound supervisor, Sky Sports, who has used Atmos extensively on football.

They use commentary as an object, going through the Dolby Atmos renderer and pushing it in to the 5.1.4 image, in keeping with the existing 5.1 mix but adding the height element to embellish it more. “Things like the PA will go in to the height, but we have to make sure it sits right in the 5.1 bed in the normal way it would be used in the 5.1 mix,” he added.

Just as in football, where the audio mix is associated with the left and right viewed from the camera 1 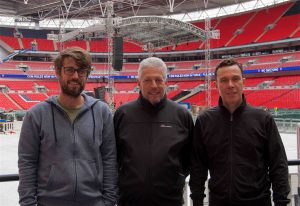 Richard Williams, Robin Broomfield and Aaron Harte during the rig at Wembley

position, for boxing it is related to the main wide view of the ring. “The fact that you have reverse camera coverage dropped in to the production and things flip around occasionally: in the live environment it is very difficult to emulate this 180º switch from one side of the ring to the other. You have to still have that common reference point of the wide camera angle, and use that for your front left/right and rear left/right and your heights.”

Of course, if you have a tight shot, such as from one of the ringside cameras over a boxer’s shoulder, you can emphasise the appropriate camera effects mic, or use a boom pole mic above the fighter and coach between rounds to get part of the conversation.

“But you have to make sure your reference of left and right stays with one prominent camera angle,” said Harte. “The overall Atmos bed needs to stay consistent,” even if you do pull up certain effects mics to match a shot.

Atmos “involves a slightly different workflow in terms of the sound desk, because you are bussing to 5.1 and to an extra four channels for height,” but they try to keep it as simple as possible, said Williams, who has been leading the Atmos project for Telegenic since it started about two years ago.

“The technical challenge is keeping it all coherent, so the viewer doesn’t hear any anomalies in the height or in the rears, but it is nothing different to what we do with 5.1 or stereo,” he added. They are looking for the same phase problems between height and 5.1, and across the stereo mix.

“Microphone placement is a bit more important, but we are constrained by stadiums and rig times, so a lot of our microphone placements are limited, to a certain extent. If you are a purist and you had a week to set up an event and had lots of listening tests, then you might have a different view.”

They also have to ensure compatibility between viewers with discrete Atomos systems (with multiple speakers) and those using sound bars, said Harte. “We get as good as we can coverage with the embellishment of Dolby Atmos, but making sure it is compatible with all those delivery formats” – it’s got to sound right in stereo, 5.1, and Dolby Atmos (whether discrete systems or sound bars), as assessed using the rendering tool, constantly switching between the formats to hear if the mix is sitting correctly.

Technically, the biggest challenge is having the separate mixes in parallel. Previously, they just relied on the 5.1 mix folding down to stereo, but they can’t rely on the fold down from the renderer, so have to keep cycling between the three mixes, “rather than having one common mix that then collapses down in to all the other flavours. That is down to the infrastructure on the Sky delivery side, where we’ve made a decision to treat an embedded ED2 stream, which feeds the Atmos, completely separately in parallel with the 5.1 Dolby E data,” said Harte.

One of the difficulties with recording Atmos is that the production gallery generally listens in stereo (although they can switch to 5.1 – depending on the truck), but “we’re hearing things quite often that they’re not set up to monitor.”

The Calrec Apollo desks Sky uses for all of its galleries and OBs offers an immersive monitoring set up, and the rendering tool creates the necessary metadata for the mix and “not only controls our monitoring environment and steers where the images need to go, but it also gives us a visual representation of where those things are sitting in a 360º [xyz] axis,” explained Harte.

Saturday was the first time for Taylor-Pugh doing Atmos. “We have to use this as a bit of a test-bed for Atmos in boxing,” which is why they planned to go back to the critical listening room at Sky to review it after the event. “There will be tweaks for the next one,” he added. “We might decide not to put so many things in the heights next time round.” Indeed, they refined it on air during the earlier bouts, although the undercard was shorter than usual.

Sky currently only delivers one UHD channel with Atmos due to capacity and infrastructure limits within its Osterley HQ. “We need to rebuild our workflows and delivery chains within Sky,” as the outside broadcast trucks it uses have already been upgraded, said Broomfield.

“This is a fairly big step for us to do Atmos, but a minority experience for Sky customers, because there won’t be many people that are listening in Atmos at the moment. However that will improve and increase as the technology becomes more available, as it is with the Atmos-ready sound bars,” he added.

“I think Atmos is developing at the right pace,” concluded Broomfield. “You don’t have to go out and put speakers all around your front room, you can do it with one sound bar. You don’t get quite the same experience or quality, but it certainly gives you much more of an immersive feeling,” he said.