Live from Wembley: Wireless UHD is a knockout for Joshua v Povetkin clash

Sky Sports used two UHD radio cameras at Wembley for the Joshua v Povetkin PPV world title fight on Saturday, where previously it has only been testing them — with one wireless UHD camera trialled at the last big boxing night in Cardiff.

Because the two wireless cameras, equipped by Broadcast RF, were so central to the production, being handheld around the ring, it was crucial to get them right, and Robin Broomfield, technical specialist working for Sky on future technology, was happy with how “the RF has moved forward. We’re confident now that the delay’s much less and it’s reliable enough now that we can give it an outing on the boxing,” he said. 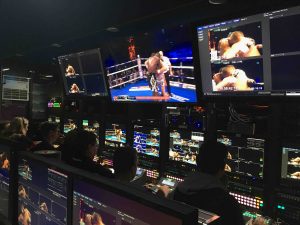 Previously the UHD RF links were a matter of “playing off delay against quality. Now, with the latest generation, the delay is down to similar to HD and the reliability is good — we’ve tested it hard during the rig and transmission. We’re confident now that the links are good and reliable.”

There were some also non-UHD cameras in use, particularly the smaller, specialist cameras, such as the Batcam Hold and the two miniature dressing room cameras, which were running at 1080p50, “because they haven’t quite moved to UHD. We’re waiting for that to happen,” he said.

Sky also had a wireless 1080p50 camera, using a Sony P1 for the Steadicam, as there is no equivalent UHD camera available, although Broomfield liked what he saw from the new Sony HDC-P50 at IBC, which is due to ship early next year. “I’m hoping that the P50 will now cover all the Steadicam operations in football, boxing and all our other sports, because what we were missing was the replacement for the P1.”

Saturday was also the first time Sky Sports has used Spidercam in UHD, using a Sony P43 box camera, as it doesn’t need monitoring on the head — but obviously that is a requirement for the Steadicam, which is why they are waiting for the P50.

The helicopter camera was also 1080p50, although it could have used UHD, but because it might potentially have been called away for a breaking news story it needed to be fully compatible with the HD news channel.

However, the production did make even more use of the two Sony HDC-4800 UHD high-speed cameras this time, “now we’ve got more confidence” in the 8x, and have refined the workflows and replay set up since using them for the first time in Cardiff. “They gave us some fantastic slomos,” said Broomfield.

Put you on Hold

The smallest wireless camera was the Batcam Hold with its three-axis stabilised gimbal and 1080p50 RF. It uses a Sony camera head so that colours and iris can be controlled from the truck and can do 100 frames per second for slomo shots.

For boxing it is used for the ring walks, offering a point-of-view over-the-shoulder shot behind the boxers. It weighs 4kg, and is relatively unobtrusive, so the boxers don’t mind it being close to them, or having it follow them in to their dressing rooms.

It is also used for arrivals (in this case including from the back of a golf buggy) and shots from in amongst the crowd during the fight itself. “The beauty of it is that you can get it into places where you wouldn’t normally get a full-size Steadicam, or any RF camera. You can sit in a seat behind someone and they wouldn’t even know you are there,” said Alastair Soutar, Batcam’s head of operations.

“End of the fight, we normally follow the boxer who’s won straight into the dressing room, but because 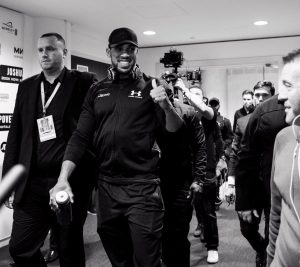 we’re so small, they don’t mind us being there. We’re not intrusive and it doesn’t look like a live camera,” he said. “So they get some great shots that they don’t normally get.”

Sky Sports first used it on boxing about three months ago, for the Haye v Bellew fight, and since then it has been used on every Box Office boxing for both Sky and BT Sports. Sky has also used it on football and cricket.

Soutar believes that anyone who has operated a Steadicam or ENG camera can use it, and it is particularly suited to lower budget productions, where it can replace a Steadicam or an ENG “and they can have the best of both worlds, because it can go off site, go down Wembley Way, do all your fans arriving and all your GV shots, and then come in and do your live boxer walking out. It’s very versatile.” On Saturday it was also used for pieces to camera.

The first version of the Batcam Hold was based on a Freefly Movi gimbal — quite a large rig, which needed a vest and arm, whereas the latest version is easy to pass to someone else, such as for a shot moving into the ring between the ropes. It hasn’t done yet, but Sky matchday director, Sara Chenery, is considering the possibility for future bouts.

Soutar is hoping to test a UHD version, with either Broadcast RF or Broadcast Wireless Systems (with its clip-on Sapphire encoder), for a fight in December, “but obviously we have to keep the size and weight down. If you get too heavy you have to have a support, and that’s what we don’t want to do.”

They could take the RF off the gimbal and cable it down. “The danger of that is that the cable is pulling and then it tilts the gimbal” — but it could be done, as on Formula 1, with an RF backpack.

Future tech – as seen at IBC

As future technology is Broomfield’s remit at Sky, the things he was most excited about seeing at IBC last week were AI and machine learning, particularly for the potential it offers for future workflows in sport. “There are so many openings for it, such as logging of sports, automation (being able to track players, football tracking), which improves with machine learning. I find it a fascinating move forward for our industry,” he said.

“On a lot of the lower budget sports we can use automation to give better coverage than we would normally,” making it economically viable to cover many smaller events. This might be particularly useful for ball-following sports, such as football, “where machine learning would come in to its own.

“But it’s got to be reliable, especially on something like pay-per-view boxing, where you’ve got people paying and we expect to deliver to them the best experience we can, which is why we’re always trying to improve,” he said.

This was the case with its move to UHD and Atmos for the fight at the weekend, “because hopefully the viewers at the top end, the people who’ve gone out and invested in technology and can monitor Dolby Atmos, will get something more out of this event than the last one.”