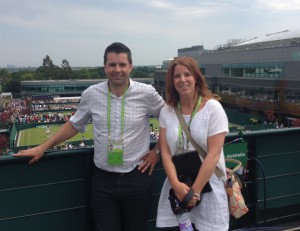 In a summer that promises to be its busiest to date, with the Pan Am Games and The Open among its other major commitments, Aerial Camera Systems (ACS) has provided a grand total of 27 cameras and 15 crew members for the duration of this year’s Wimbledon tennis championships.

As part of the current AELTC (All England Lawn Tennis and Croquet Club) initiative to increase the number of camera positions and enhance overall coverage of the site, ACS was engaged to provide a variety of specialist and customised cameras – indeed, approximately four times the quantity of equipment supplied for the 2014 event.

“There is a mandate to develop the coverage, and part of that is offering more ‘beauty’ shots and showing off the fabulous Wimbledon site,” ACS sales director Matt Coyde tells SVG Europe as we survey the Wimbledon grounds from a sunblessed Broadcast Centre roof.

New deployments for 2015 include one SMARThead Pan Bar System (including a Sony 3300 camera supplied by NEP Visions), a 30m track and HD Cineflex stabilised mount on the No. 1 Court roof, and a 10m track and SMARThead remote with Sony P1 camera, lens and ACS-developed SMPTE Fibre Transmission System at the top of Murray Mound (formerly known as Henman Hill). 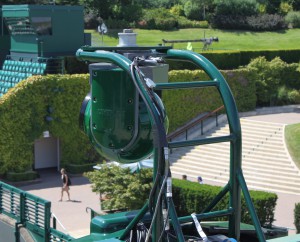 One of several Cineflex cameras with stabilised mount supplied by ACS

“The extra involvement at Wimbledon this year is obviously great news for ACS, and in fact we are having a very busy summer in general,” says Coyde. “Other sports commitments include the Women’s World Cup, the South East Asian Games, the European Games and Queen’s Club Championships. We’ve also been doing a number of BBC event projects, as well as plenty of aerial filming work. Our freelance pool has increased in response to the workload.”

Whilst NHK is undertaking an 8K trial at Wimbledon, there is no 4K capture this year. “We do have 4K capability, based around Sony F55s, so we can certainly provide it when required,” says Coyde. “It’s a development that has to be driven by the broadcasters, and I am sure that 4K adoption will happen, although maybe a little slower than expected. I suspect that things will pick up when there are more 4K trucks with full down-conversion capability so that you can output 4K and HD simultaneously without needing separate trucks onsite.”

As for the overall demand for specialist cameras in sports, Coyde believes that the market has “definitely matured over the last few years. In fact, what used to be regarded as specialist cameras are almost mainstream now, so the market is more competitive off the back of that. But the extent of our in-house capabilities – the SMARTheads, track systems and so on are all developed in-house – are unique, and I think help to explain the continued growth of the business.”