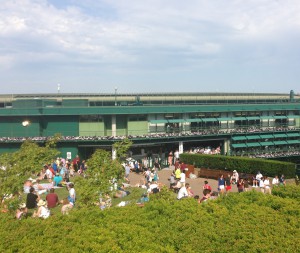 Last year witnessed a landmark change in the outside broadcast arrangement for the Wimbledon Championships when NEP Visions took over from SIS LIVE as OB services provider to host broadcaster the BBC. The consensus view that it was an extremely smooth transition, but as Brian Clark – commercial and technical projects director for NEP Visions, which is also providing OB services for ESPN’s US Wimbledon coverage – tells SVG Europe, that doesn’t mean there was any scope for relaxation as year two of the new set-up moved into view.

“There are always lessons to be learned and the overall emphasis is to avoid any sense of complacency,” he says. “It’s a process of continual improvement. In fact, we went into this tournament like it was the first year.”

In terms of the facilities and number of personnel (well into the hundreds), there is no significant change from 2014. However, NEP Visions has “rolled in some extra equipment” into existing trucks to help the BBC cover its new-look nightly highlights programme being broadcast from Wimbledon’s Gatsby Club.

Whilst there is no 4K capture as such at this year’s tournament, NEP Visions has supplied a single Grass Valley LDX 4K camera, deployed statically to look across Centre Court. “It’s something we are doing on behalf of the Club and the footage is being shown in the Members’ area,” says Clark.

Regarding NHK’s 8K demo, NEP Visions has had no real involvement as such but did work with the broadcaster on its “camera positions and to ensure that neither of us would be getting in each other’s way”.

With the demand of additional linear and online content growing all the time, the Club has pressed ahead with some extra automated HawkEye camera systems situated on more of the outer courts. “We provide the facilities in terms of audio and the integration of HawkEye back into the coverage,” says Clark. “This is an ever-expanding area for the Club as people want more and more content.”

As might be expected, NEP Visions’ Wimbledon prep is essentially an ongoing year-round process and involves close cooperation with broadcasters and the Club itself. “We are not just a facilities provider; we are keen to work with them to improve the coverage by coming up with new ideas.”

Aside from a characteristically busy summer of sports commitments, NEP Visions is currently preparing to provide OB services for BBC Scotland at the T in the Park music festival. The company will also supply OB facilities to the BBC to cover the broadcaster’s iconic Proms classical music festival, which takes place every July to September at London’s Royal Albert Hall.