Live from Wimbledon: Business as usual for the BBC despite host broadcast overhaul and World Cup clash 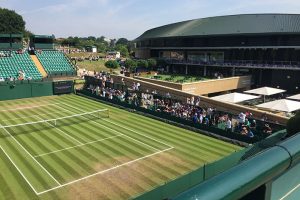 With a completely new host broadcast set-up to get familiar with, no Andy Murray, and serious competition from the World Cup in Russia, you’d think it would be a strange and worrying Wimbledon for BBC Sport’s tennis production team. But, as SVG Europe discovered, that seems to be far from the case.

Sure, the corporation is no longer responsible for producing the host coverage, with the All England Lawn Tennis Club (AELTC) having now taken the host broadcast operation in-house, and it is certainly competing against itself for viewers thanks to England’s football heroics in Russia at the World Cup. Injury to Andy Murray has compounded things further, robbing the Beeb of its one domestic tennis superstar.

But rather than seeing its glass (of Pimm’s) as being half empty, instead, the BBC is seeing it as very much half full.

“Because we [the BBC] are also showing the World Cup, it’s not such a bad problem to have,” Ron Chakraborty, lead executive, major events at BBC Sport told SVG Europe on Friday (6 July 2018). “We’ve waited quite a while for a deep England run in the World Cup. If one of the knock-ons is that Wimbledon isn’t quite being talked about as much as in previous years, that is not too bad. We’re embracing it.”

“At the moment, it feels like business as usual but with a slightly different look behind the scenes. Hopefully, on screen, it looks the same as it ever did.”

This effort to ’embrace’ the World Cup has seen the BBC production team join in with the nation’s excitement, producing  ‘Good Luck England’ messages with tennis stars such as Boris Becker and John McEnroe. 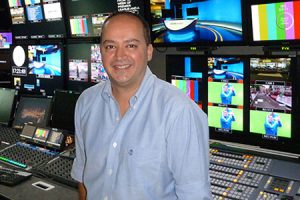 “We know that every two years there’ll be a World Cup or Euros and we might have this little clash,” continues Chakraborty. “We always pair up a bit but this World Cup has gone mad. People have been waiting a long time for England to do well. At the same time, we haven’t got our secret weapon in the shape of Andy Murray.”

Chakraborty reveals that the BBC spoke to FIFA some two years ago (as did AELTC), asking about the possibility of moving the kick off time for Sunday’s World Cup final in order to avoid a clash with the Wimbledon men’s final – but as the BBC is one of only two rights holders that are showing both tournaments, no such flexibility was possible.

Murray pulling out through injury is perhaps more of an issue than the World Cup clash as, certainly, the floating TV viewer is more likely to watch Wimbledon when a British player is doing well. And in recent times that has been Murray.

Chakraborty is, again, not overly concerned, however.

“We’re absolutely spoilt, having a player in Murray who always makes the quarters and the semi-finals and even actually wins the thing. It’s been brilliant. Growing up, the nation would go crazy if [former British number one] Jeremy Bates made the second week!

“Wimbledon survived without British success before Andy. We talked about Bjorn Borg, about McEnroe and about Becker. The international stars will always be there. We’ve been lucky. It’s been a golden era and not just with Andy Murray but before that with Tim Henman and also with the Williams sisters, with Federer, Nadal and Djokovic. The last 20 years have been absolutely extraordinary.” 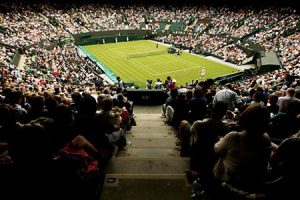 So, if the World Cup and Andy Murray have not overly concerned Chakraborty, and the weather has certainly been kind, how about that new host broadcast set-up?

“I’ve not noticed too much difference and that was one of the main things both AELTC and the BBC felt was important: we didn’t want anyone to suffer. We went into this trying to make it as constructive and collaborative as we could. As a result, in some ways, although there are two separate entities, WBS [Wimbledon Broadcast Services] and the BBC, we’re still interlinked. Seven or eight of the directors here are BBC staff. In many ways, it feels the same. Yet, you walk down to the ground floor of the Broadcast Centre and you’ll see a big difference.”

That ‘big difference’ is the host broadcast operation, now run by WBS, in partnership with NEP. Housed within the Broadcast Centre, it has taken over an area that was mainly storage before but is now NASA-esque in its scale and complexity.

“I’ve not seen many better broadcast set-ups,” says Chakraborty. “It definitely feels future-proofed. AELTC have an extraordinary ability to make things like this happen.”

“I’ve not seen many better broadcast set-ups. It definitely feels future-proofed. AELTC have an extraordinary ability to make things like this happen.”

The BBC still has its own production area, resourced by Arena Television, and is benefitting in various ways from not being the host, not least from the ability to stream coverage from centre court in 4K via the iPlayer. It can also take feeds from all 18 courts now thanks to WBS’ decision to extend its coverage to the outside courts. These are being streamed online too.

“We don’t have to worry about the world feed either and we have a smaller operation,” adds Chakraborty. “It has taken a few concerns away. Obviously, 4K is a major benefit. At the moment, it feels like business as usual but with a slightly different look behind the scenes. Hopefully, on screen, it looks the same as it ever did.” 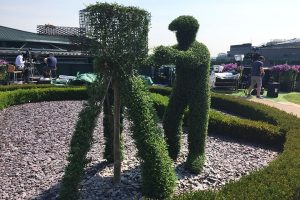 The BBC has been showing TV coverage of Wimbledon since 1937

Chakraborty admits to not being terribly technical but he can certainly appreciate what the additional detail of 4K brings to tennis coverage.

“On the very first day, it was fitting that Roger Federer was the first player to appear on centre court. The jaws were on the floor as people could see the footprints in the grass. It looked great.”

Some innovations, he adds, “are not so successful.”

“I remember having a 3D truck at Wimbledon. You’d walk in, see the pictures and think ‘wow, how clever’. But after five minutes you’d say ‘can I watch it properly now?’ I wouldn’t go as far as to say it was a gimmick but it certainly wasn’t something that fitted sport. Whereas you look at 4K and you go ‘yeah that is something that has a future.’ HDR is a key part of it too.”

“There is something about the BBC and Wimbledon. It’s part of the summer. It’s a thing that people look forward to.”

For Chakraborty, though, it’s not extra pixels or colour depth or even British sporting success that are crucial for the BBC’s coverage of Wimbledon. There are two other things that play a bigger part, and both are available in abundance this year.

“Sunshine undoubtedly. But also great moments. We had a great moment last night [Thursday 5 July 2018] with defending women’s champion Garbine Muguruza losing to Alison van Uytvanck in the second round. That was a great moment. It’ll be a quiz question one day.

“There is something about the BBC and Wimbledon. It’s part of the summer. It’s a thing that people look forward to. It’s up there with all the great things the BBC does: Doctor Who, Blue Planet, Wimbledon. It’s one of those. There is a great relationship between the two. There is a tradition. It’s two weeks in the year where people go mad for the tennis. And that is what we try to capture. Despite no British players, I think we’re set for a really special second week.”

The BBC’s coverage of Wimbledon 2018 continues on TV, radio and online until Sunday 15 July.