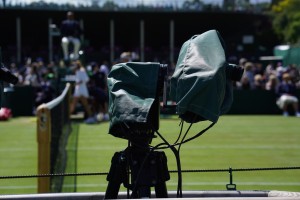 Hawk-Eye’s SMART Production service has been a fixture at Wimbledon since 2013.

The ability of Hawk-Eye’s SMART Production service to deliver a streamlined approach to live production has seen its popularity grow steadily over the past few years. Tennis has been one of the sports in which it has achieved particular traction – due in part, no doubt, to its ability to enable cost-efficient capture of the smaller courts during a period when a technological ‘arms race’ around the filming of non-show courts has been taking shape.

Laurence Boyd is director of SMART Production at Hawk-Eye – which was acquired by Sony in 2011 – and confirms that the extent to which the service has been used at Wimbledon “has grown from one court when we started there in 2013, to three in 2014, and six in 2015… and we are doing the same number again this year. At its very top level, SMART Production is IT-based remote production technology, whilst at its heart is Vision Processing player tracking technology which is based on colours. An intelligent production software that is unique to Hawk-Eye makes it possible to manage the entire production – including graphics and replays – from one workstation.”

When applied to tennis, SMART Production typically employs three or four automated player tracking cameras. At Wimbledon this year, the team has been using Sony PMW series cameras on all six courts – specifically, courts 5, 6, 7 9, 10 and 11. Footage was shot for seven days on each court, with all content available through the red button and the BBC iPlayer app.

In terms of who else is taking the SMART Production court content, Boyd says that “most of the customers are international broadcasters wanting footage of players who don’t get on the show courts. Australia, China and Denmark are among the big SMART Production consumers, while ESPN and the Tennis Channel have been using the footage when American players are on the outside courts.”

The efficiency of the SMART Production approach is further underlined when one learns that the entire Wimbledon on-site team featured no more than 10 or 11 people at any one time, including relief operators and supervisors.

“The underlying aim [with SMART Production] was to find efficiencies in the production process,” says Boyd. “So you have a scenario where there are automated solutions for mixing audio and camera control, so that effectively you have just one operator per court who is cutting cameras and running replays – as well as editorialising graphics occasionally, although graphics are also automated. So it’s not labour-intensive.” 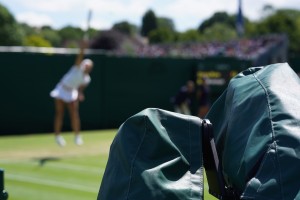 SMART Production at Wimbledon 2016 is making extensive use of Sony PMW cameras.

Boyd confirms that it has proven to be a hit both with Wimbledon organiser AELTC and rights holding broadcasters. “I think the tournament is always happy to offer more courts, and we are very competitively priced compared to traditional production. And for the rights holders, it is great that they are able to get hold of every match in which they are interested.”

Outside of Wimbledon, SMART Production has a substantial presence at many of this year’s other principal tennis tournaments. It worked on 14 courts in total at the French Open, while there will be five SMART Production courts at the US Open in late August/early September. “We will also be doing 81 days of coverage for the ATP at the World Tour Masters 1000 events this year,” adds Boyd.