IMG’s team of 50, including 20 full-time staffers, is once again on hand at Wimbledon overseeing the production and distribution of the world feed, the Wimbledon Channel, the official 2018 film, and highlights. But there are some changes this year, most notably a state-of-the-art production facility and the decision to expand RF capabilities for the Wimbledon Channel so that its talent can roam the grounds rather than be tethered to a rooftop studio at the Broadcast Centre. 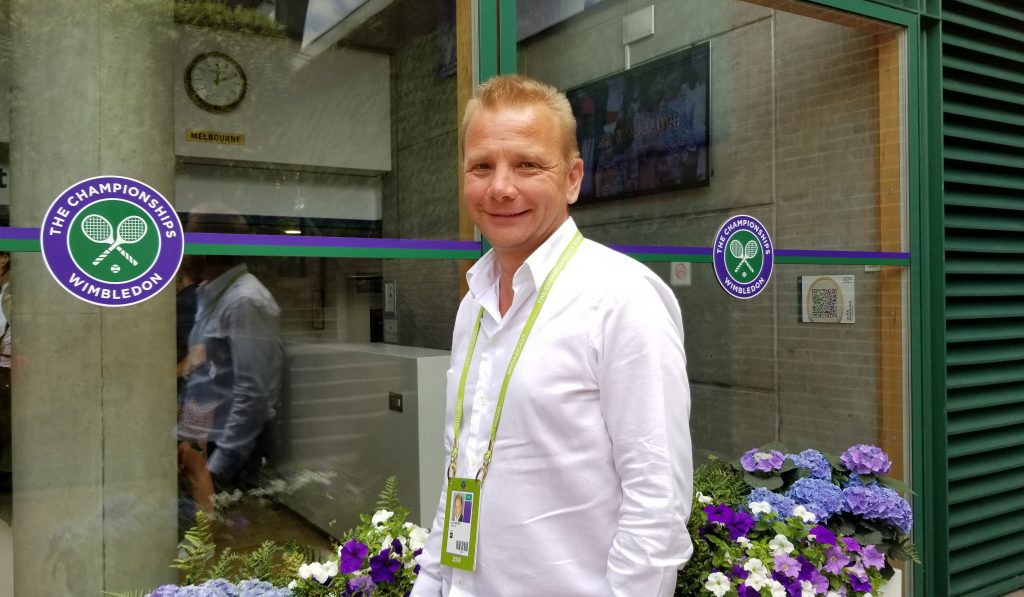 Alan Bright of IMG says the move to IP has gone well at Wimbledon.

“It gives the talent the opportunity to talk to anyone, anywhere,” says Alan Bright, IMG, director of engineering. “We use the RF network put in by Broadcast RF and Broadcast RF also supplies two RF cameras that we deploy. It’s worked very well.”

There is still a rooftop presence for the Wimbledon Channel via a touchscreen that is typically used for Premier League coverage. With Premier League on hiatus for the World Cup there was an opportunity to put that system to a new use for analysis of statistics, matches, and more.

All signal transport is via next-generation SMPTE ST-2110 IP connectivity and the World Feed gallery is buzzing from approximately 10 a.m. until the last significant match has ended while the Wimbledon Channel gallery starts around 9 a.m. with interviews with some of the fans who cue up across the street from the night before in hopes of getting into the grounds. It goes off air at 7 p.m.

Bright says one of the biggest changes from last year is that NEP now provides all of the technical facilities for IMG’s needs as, historically, IMG relied on Timeline and Gearhouse Broadcast. But with the AELTC taking over host production operations from the BBC this year the IMG team sits within the Wimbledon Broadcast Services facility.

“I think it’s gone very well,” says Bright of the efforts undertaken by AELTC. “They met their aspirations to put the club in charge of what they offer the world’s broadcasters. There was quite a large element of risk with the project because they have a reputation to protect, and quite rightly because it is a global brand that is very well respected. But I think they’ve done that very well, the broadcast center has worked well, and they brought in some good technical people.”

Bright adds that AELTC should be congratulated for some of the ambitious changes they tackled, including UHD and HDR coverage from Centre Court and then the move to IP.

“They didn’t shy away from pushing the boundaries and they are right at the forefront of where broadcast technology is,” he says. “They’ve changed a massive amount of technology behind this event and it was a bold move.”

Bright says the move to IP switching effectively creates the equivalent of a 3,000×3,000 router that can make signals available to nearly every broadcast area.

“From my point of view, it makes it a lot easier to get signals into the galleries and control rooms where they are needed and relatively easily,” says Bright. “It’s opened up all of the signals and with less infrastructure.”

The move to IP future proofs the plant and also allows for things like the UHD HDR production from Centre Court.

“UHD with HDR works particularly well with tennis, especially here where the players are wearing white,” says Bright. “It is one of the best examples we’ve seen of UHD HDR.”

IMG’s role extends around the globe as IMG also creates a 52-minute daily highlight show that is distributed at 9:30 every night as well as a shorter in-flight programme available to air passengers around the world. IMG also manages the distribution of signals worldwide. Satellite distribution plays a key part and all of the court feeds are available to rightsholders in Europe.

“A large number of the court feeds are also available in Asia to those who pay for them,” says Bright. “But those who are on site, like ESPN, can do their own distribution and send out their own signal.”