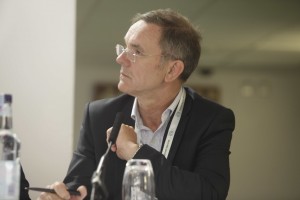 As production partner to the AELTC, Wimbledon is one of IMG Media’s most significant annual commitments. Speaking to SVG Europe as the first week of the 2016 championships drew to a close, IMG Media global director of engineering & technology David Shield reflected on some of the new elements of the broadcast production this year – although the conversation began with the subject of one noticeable absence.

After 4K and 8K trials over the last few years, there is no UHD tests or production at Wimbledon 2016…

That’s right. It’s interesting that it has not come up in the Wimbledon context this year. I wouldn’t say I am surprised by that. What I have been surprised by is the situation we have encountered with the Premier League and, in particular, one broadcaster who recently gave strong indications that they wanted to go down the route of 4K distribution and were prepared to pay for it themselves and put it out on a DIRECTV channel. But since those initial conversations it’s all gone rather quiet. The adoption of 4K is hard to forecast.

Can you talk us through some of the main changes this year?

There are a number of additional beauty camera positions this year, as well as cameras on the practice and warm-up areas [discussed at length in a separate feature with specialist camera provider ACS]. From an IMG perspective we are now up to 19 archived feeds that go onto EVS systems here and then are ingested back at Stockley Park each night. ESPN has also done a deal to use the Live @ Wimbledon studio [situated on top of the broadcast centre] to do their highlights coverage from 10pm to 11.30pm each night. On the subject of ESPN, we are also doing some remote production for ESPN Interactive’s red button service.

It’s also worth noting that there have been a few changes to IMG personnel working on the tournament this year. Stephen Farr, who was the engineering manager for many years but has chosen to take semi-retirement, has come back on a consultancy basis this year. The engineering team is led by Alan Bright and Roy Callow.

In previous years, you have spoken of IMG’s ongoing project to digitise the Wimbledon archives. How far has that now progressed?

Everything has been digitised as far back as 2007. All the old video tape has been transferred to Digibeta. I am sure that in time the digitisation process will go further back beyond 2007, but it will be more of a heritage-type project than one that is driven by commercial imperatives. The situation is more acute when it comes to the film material, as obviously that will deteriorate, particularly when it gets to the 25-year mark.

Would it be fair to say that this has been more of a ‘consolidation year’ than one in which there have been radical changes to the production set-up?

Yes, although to me it feels much busier than ever before this year. But that’s probably just the fact there are more people crammed in everywhere…!