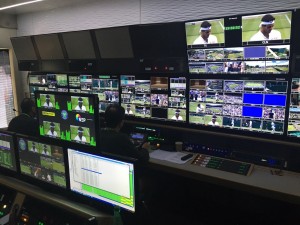 Inside the new NEP Pacific truck, stationed at the All England Club on 1 July 2016. (Photo: David Davies)

Although the 2016 Wimbledon championships have not occasioned any actual 4K production, they have witnessed the major sports event debut of the first of four new UHD trucks from NEP Group, Pacific, due to enter service between now and the end of the year. Quite apart from the impressive size, scale and specification of the new vehicles, there is also their broader significance in the wake of the devastating fire that hit NEP’s Bracknell, UK, premises last November.

“It’s great that we have been able to come back with something that is so integral to delivery and such a technological success for us,” says NEP UK and Ireland president Steve Jenkins, adding that initial feedback from personnel using Pacific – the first of the trucks to enter active service – has been “fantastic”.

All four trucks will feature broadly similar technical specifications. The second truck, Aurora, is expected to be ready by late July, while Caspian and Sargasso are due to debut by the end of October.

Stronger together… or apart

Designed by NEP UK engineering and technical director Rob Newton, the new trucks have the ability to work standalone, or together in any combination. They are able to interconnect with each other via a CWDM fibre system, while the configuration allows for 200 shared 3GB signals to be sent between the trucks. Suitable for operation in both UHD and HD/HDR modes, the trucks feature Imagine Communications IP3 routers with hybrid IP/baseband router infrastructure and design. The routing infrastructure is said to be the largest in NEP’s worldwide fleet.

Guiding SVG Europe around Pacific on day 5 of Wimbledon 2016, NEP Major Projects director of sales, Brian Clark, describes it as a “true multi-standard truck. You don’t have to have a 4K truck sat there or an HD truck sat there; [with this truck] it is just as easy to work in 4K as it is HD.”

At Wimbledon 2016, Pacific is being used to deliver Centre Court coverage for the BBC using 20 Sony HDC-4300 4K cameras operating in HD mode – although the truck actually offers capability for up to 30 cameras (indeed, NEP recently purchased no fewer than 66 HDC-4300s.) Five EVS XT3s are being used for replay – although there is capacity to accommodate a maximum of 12 – while switching is courtesy of a SAM Kahuna 9600 6ME 1080P/4K vision mixer. On the audio side, the infrastructure is based around a Calrec Apollo console, Genelec monitors and Telex intercom technology. 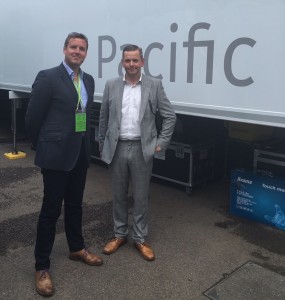 The underlying objective of Newton’s work on the new fleet, says Clark, “was to try and make them all identical, within reason, on an engineering level so personnel can come in and find them easy to work with.”

Comfort has been another constant watchword, and this is noticeable to even the casual visitor as Pacific feels airy and spacious. Fully expandable, the truck doubles in size when opened out, yielding an impressive 1,000 sqft of floor space.

When all four trucks have rolled out later this year, they will seal a renaissance for NEP’s UK operation in the wake of the aforementioned Bracknell premises fire last November. Client manager Luke Westbury confirms that “it has been really heartening to see the level of support [others in the industry have offered] over the last year. It has been one of those periods where you realise how much of a cottage industry this business really is, and that there is a substantial element of people having each other’s backs and caring for each other’s livelihoods.”

Nonetheless, there is no substitute for a powerful and versatile arsenal of your own, and in the four new trucks going live over the next few months it is evident that NEP has equipped itself for the long-term. “Everybody seems very positive about these new trucks, and we look forward to showing what they can do as 2016 continues to unfold,” says Jenkins.

Alongside its OB truck, NEP is also providing extensive flypack-based equipment for BBC, ESPN and AELTC at this year’s Championships. No fewer than nine flypack production areas are being used to cover six outer courts (two of which are for ESPN), as well as the international interview production area.